Ivan Rakitić (born 10 March 1988) is a professional footballer who plays for Spanish team Barcelona, as a central or attacking midfielder. Rakitić started his professional career at FC Basel and spent two seasons with them before he was signed by Schalke 04. After spending three and a half seasons in the German Bundesliga, he was signed by Sevilla in January 2011. Two years later, Rakitić was confirmed as the club captain and captained the team to UEFA Europa League triumph.

Rakitić was born in Möhlin in the Swiss canton of Aargau to a Croatian family. His father, Luka, and his family are originally from Sikirevci, while his mother's family are Bosnian Croats from Žepče. He has a brother Dejan, and has a tattoo supporting him with the word "Dejan" on his right arm. Rakitić spent his childhood and early career in Switzerland. His father and older brother were also footballers. With such a background, it was no surprise when Rakitić took a strong interest in the same aspirations, even as he was completing his primary school studies. Subsequent to doing so, he began to concentrate on his sporting career, with his family's encouragement. At age 16, he was noticed by top European scouts who acclaimed his young potential, although he and his family decided to stay in Basel to allow him to play more regularly in a smaller league instead.

His performance against Brazil in WC14. He was playing out of position.

I for one welcome our Croatian over lord.

Croatia's Ivan Rakitic has described his move from Sevilla to Barcelona as "a big step" ahead of his country's pivotal Group A game with Mexico.

The 26-year-old will join the Blaugrana following the successful negotiation of a €20-million fee and has agreed a five-year deal to join Luis Enrique's side.

Rakitic, speaking ahead of his nation's vital World Cup encounter against Mexico, insisted he was completely focused on Croatia but was also looking ahead to his future with his new club.

"Moving to Barcelona is a big step in my career," the midfielder told a press conference.

"I want to thank Barca for being fair in the negotiations and satisfying Sevilla."

Rakitic, who scored 32 goals in 149 games with Seville and lifted the Europa League trophy last season, also thanked los Rojiblancos for his time at the club.

"Sevilla is my club and I am very sad to leave," he continued.

"I had three wonderful years there in which I got married, had a daughter and had a great time personally."

As a Mexican, tomorrow will the be only time I will not root for Rakatic. Long live his golden hair

Ivan Rakitic wrote:When [Sporting director Andoni] Zubizarreta called me I said "yes" as quickly as I did on my wedding day,' the 26-year-old said.

I can play as defensive midfielder. At every position, you need to understand what the coach wants. I'll try to do the best I can. 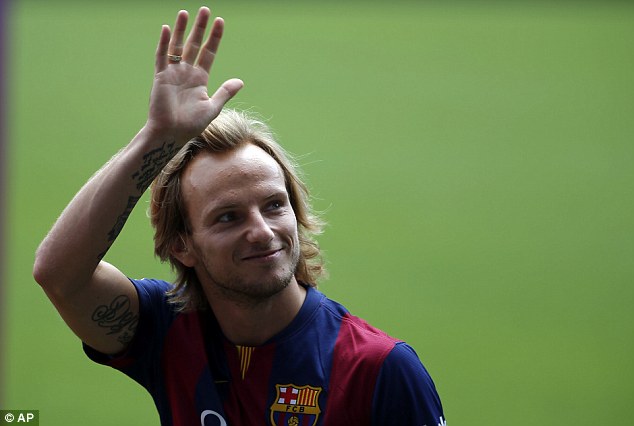 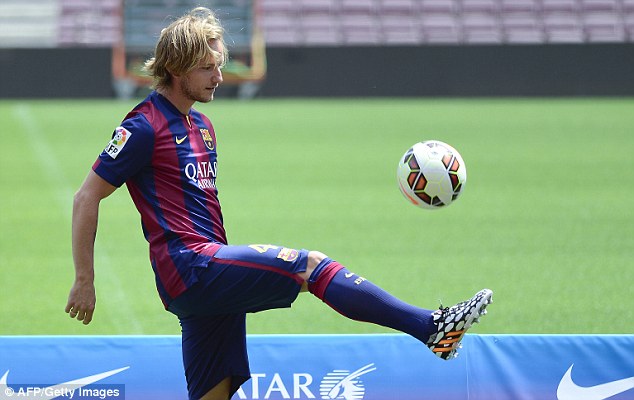 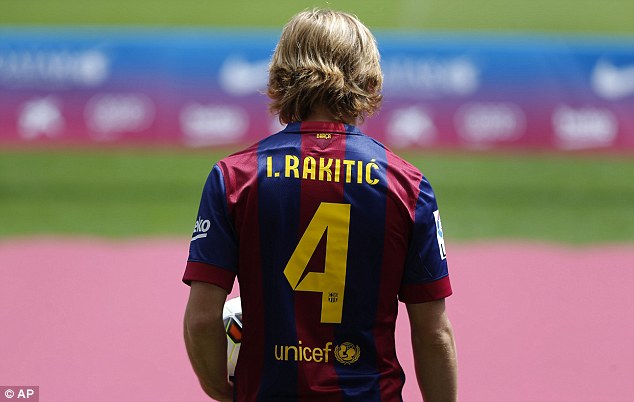 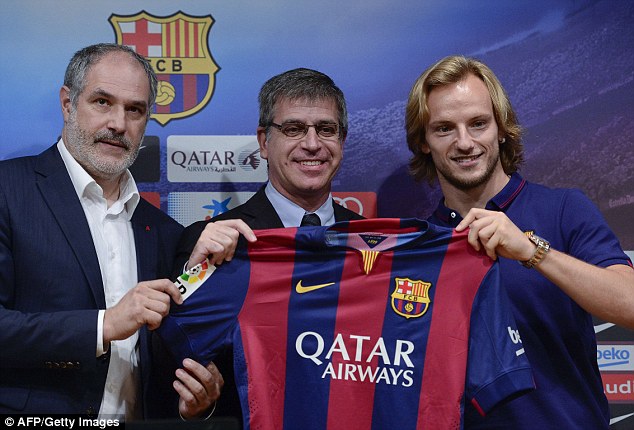 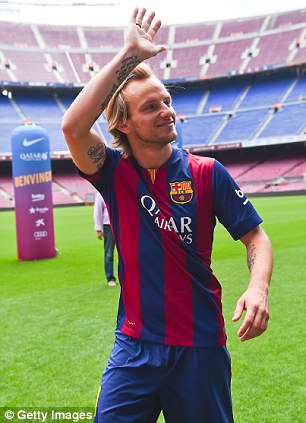 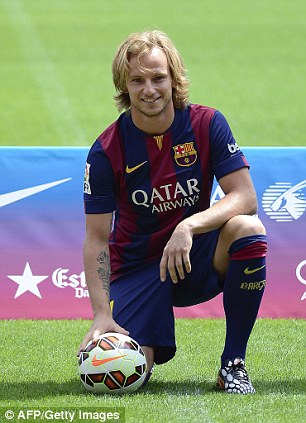 Rakitic would be amazing as an enhanced version of the role Keita once had.

As in a guy behind Xavi and Iniesta who can fill in for either or provide a "different" kind of midfielder.

As the consistent partner to Iniesta, I am somewhat less optimistic overall. Dont get me wrong, I am pretty sure he will do well and I already said I rate him and think he is a good signing...but with Xavi going we will be missing something he cant bring.

Well thats disappointing.... I thought he can be the play maker type.... Cocu wasnt all that good, he was more like a all rounder worker type instead of a really good creator. The WC Croatia flopped, so I have not much idea if he is good enough for us.... lets hope so.

Firstly, I didnt say he plays like Cocu. I said he could have a similar role and similar impact.

Just cause Croatia flopped doesn't mean he will flop for us. Too different teams, strategies, tactics etc. In that case all of Spain is gonna flop this season lol

Indeed. Its funny the reactions to the WC, I mean 3 games > entire season according to some comments and theories you see.

him and modric were poor this world cup. but modric defo has more technique and agility to him.

"I don’t like to dream, I want to make it happen. I’ll take it day by day and hope to perform at 100%, and try to give everything on the pitch, doing my job as well as I can, with no time to dream".

The new signing says the pressure is on at Camp Nou after a rare trophyless campaign, with the summer arrivals being told that failure is not an option

Ivan Rakitic has revealed Barcelona’s summer signings have been told in no uncertain terms they have to lead the club to silverware in 2014-15.

The Camp Nou side failed to win a major trophy under Gerardo Martino last season, the first time in six seasons they have failed to secure success in either La Liga, Copa Del Rey or Champions League competitions.

Luis Suarez, Marc-Andre Ter Stegen and Claudio Bravo have also joined this summer, while the likes of Gerard Deulofeu and Rafinha return from loan spells to give the squad a fresh look under new coach Luis Enrique.

Rakitic, who arrives from Sevilla after helping Unai Emery’s men to glory in the Europa League, says it has been made clear to the new arrivals that another dry season will not be tolerated.

“I read that Barca have spent more money this year than they have in any other summer transfer window and the very first thing they told me when I arrived was ‘we have to win everything!’ - so I want to be ready," the midfielder told a press conference in Split.

"I keep saying that I am not here to replace anyone, I come to Barca to be Ivan Rakitic. Replacing Xavi? He is still at the club.

“I cannot wait to meet all my team-mates and to be part of a football style everyone is talking about. I want to learn from them all, but I also want to be able to contribute and help them to improve as well.”

Rakitic says he wants to be a versatile option for Luis Enrique to call upon and again moved to dismiss suggestions he was unhappy paying in a deeper role for Croatia at the World Cup.

The Croatia international added: "I have spoken to the coach. Barca play with a 4-3-3 and he told me I can cover all three midfield positions.

“Due to the World Cup there was not a huge amount of time to talk to him, but I have spoken a lot to Andoni Zubizarreta. Midfield is a very important position for them and now I am part of it.

“I trust Niko Kovac and there are no issues over the World Cup. My coach at Sevilla always received the same questions... I think it is funny. I always give my best wherever I play - once for Sevilla I even played right-back!

“The deal was for me to back up the play behind the other midfielders like Luka Modric, Mateo Kovacic and Sammir and that is what I did. It didn't work out and now it is easy to look for a guilty party.

“We are not satisfied with going out of the World Cup so early but now we will clear our heads for the Euro 2016 qualifiers, where we will be powerful. The team is maturing.”

Rakitic will face a La Liga title battle against two international team-mates next season, with Modric playing a key role for Real Madrid and Mario Mandzukic having signed for champions Atletico Madrid.

The Barcelona man explained: “We have been having jokes about it. In last year’s final I cheered for Luka but now I have told him this season you will finish second… and Mandzo will be third!”

The 26-year-old insisted he would miss life with Sevilla and was adamant he had not moved clubs for financial reasons.

“Sevilla was always No.1 for me and when I left, I wanted them to be satisfied with the deal because that club means so much to me,” continued Rakitic.

“Money was not key, I will live the same life with €7 million or just €10. What is important is to make step forward and in Barcelona I will do that."

Rakitic would be amazing as an enhanced version of  the role Keita once had.

As in a guy behind Xavi and Iniesta who can fill in for either or provide a "different" kind of midfielder.

As the consistent partner to Iniesta, I am somewhat less optimistic overall. Dont get me wrong, I am pretty sure he will do well and I already said I rate him and think he is a good signing...but with Xavi going we will be missing something he cant bring.

Well stated dani. That something will not come back. Thankfully Xavi is staying but he cannot become younger. We'll have to rethink the dynamics and find something at least half as good as what we had in those days to become the best team in the world again. Looks quite a tall order at the moment.

Irrespective of price which players would you all have liked to purchase instead of Rakitic - Pjanic, Pogba, Gundogan, Verratti, Kroos, Koke, etc. or is he the best fit for us ?

Gündogan for sure if he were fit.

messixaviesta wrote:Irrespective of price which players would you all have liked to purchase instead of Rakitic - Pjanic, Pogba, Gundogan, Verratti, Kroos, Koke, etc. or is he the best fit for us ?

Try any of the above. And thats nothing against Rakitic who I indeed do rate.

What makes you say you would rather have Pjanic and Koke than Rakitic?

For me it would be in this order:

I'm a huge fan of Verratti and I think he would do well at Barcelona once Xavi leaves/retires. His technique and agility is far superior to that of Gündoğan/Koke who are often hailed as Xavi-esque players. Pogba is also a fantastic player but I prefer Verratti slightly deeper than Pogba.

Pjanic, Gundogan (if he regains form), Veratti in this order

pre-injury i would put Gundogan first but he's been gone for far too long.

Similar topics
» Ivan Rakitić Appreciation Thread
» Ivan Rakitic 2013/14 all goals and assists
» Now that Rakitic has firmly established himself as the best Croatian midfielder in the world what's next for this long-haired beaut?
» Official: Rakitic to Barcelona
» Juve target Croatian youngster

Page 1 of 4
Permissions in this forum:
You cannot reply to topics in this forum
Latest topics
» ¤¤ WORLD CUP 2022: The prediction challenge ¤¤