Official stats thread.Will try to update it as much as possible including interesting facts taken from @OptaPaolo.

Let me start of with some :

12 -Juventus have played 12 times in their history in the last 32 stage in #UEL/UEFA Cup, progressing 10 times to the next stage.

Stats for some our players in all competitions :

Some 'Did you know' facts from Football-Italia :

Juventus are the first side in Serie A history to win eight on the bounce without conceding a goal, but netted 19 in that time. Gigi Buffon extended his unbeaten run to 730 minutes of domestic football. With 43 points after 16 rounds, this is the same tally Juve had in 2005-06 and one point shy of the all-time record set by the Bianconeri in 1949-50 (calculating three points for a win).

10 - Carlos Tévez has become the 4th player to record double figure goals for Juventus  in a Serie A season under Antonio Conte. Apache.

That says much about how poor ,the strikers we've had in previous seasons.

3 - Martin Cáceres has netted his 3rd goal in Coppa Italia: the Uruguayan found a brace vs Milan back in February 2012.

Juve’s top scorer in each of the last four seasons managed a grand total of 10 goals, but Carlos Tevez already has 11. Paul Pogba matches last year’s tally of five, while Arturo Vidal has netted 12 this term in all competition. For the 16th time in their history, Juventus went into the Christmas break top of the table. They went on to win the Scudetto in 13 of those years, failing only in 1929-30 and 1975-76.

Between home and away, Atalanta managed only two draws from 18 meetings with Juventus since a 2-1 win in 2001. The Old Lady have won their last seven visits to Bergamo on the bounce. The Orobici are without a win since beating Bologna 2-1 on November 10, earning only two points from five rounds. Maxi Moralez netted his ninth Serie A goal. Stefano Colantuono has never beaten Antonio Conte with one Serie B draw and six losses. 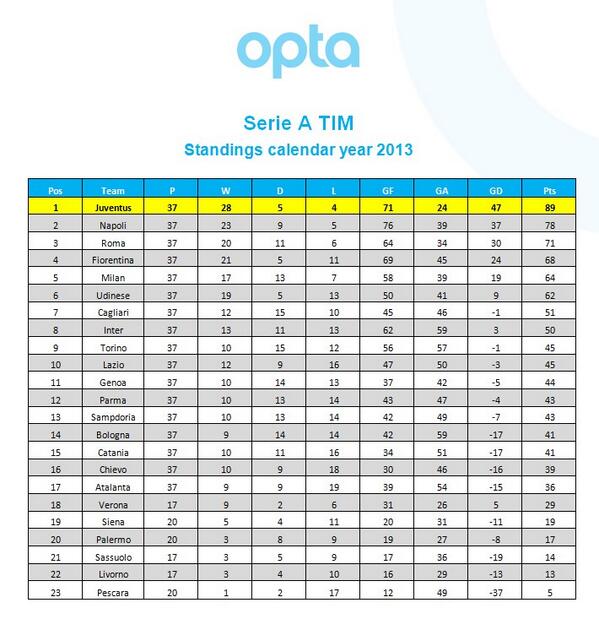 Some facts looking ahead to the Roma game :

1 - Roma have won only one of their last 10 games at Juventus' ground in Serie A, with 3 draws and 6 wins for the Old Lady.

8 - Francesco Totti has scored 8 goals in Serie A vs Juventus, 6 of which over his last 10 appearances vs the Bianconeri.

10 - Defeating Roma,Juventus have equaled their own record of 10 consecutive league wins established in 1932. Sprint.

12 - @kingarturo23 has been involved in 12 goals this term (8 goals, 4 assists), a joint-record among Serie A midfielders. Ace

4 - @kingarturo23 has scored 4 goals in Serie A against Roma, his favorite target in the top-flight (along with Lazio).

248 - Juventus have scored the most goals in Serie A right against Roma, 248. Countdown

S wrote:10 - Defeating Roma,Juventus have equaled their own record of 10 consecutive league wins established in 1932. Sprint.

12 - @kingarturo23 has been involved in 12 goals this term (8 goals, 4 assists), a joint-record among Serie A midfielders. Ace

4 - @kingarturo23 has scored 4 goals in Serie A against Roma, his favorite target in the top-flight (along with Lazio).

Saw his goals vs Lazio last year in Rome

... I don't remember if lichtsteiner got boed

We have equaled Roma's record of 10 out of 10 wins they achieved this season.If we get another win next week ,i think it'll be an all time Serie A record as far as i know.

I think the record for Roma was 10 consecutive wins to start the season.

GIGItheBest wrote:I think the record for Roma was 10 consecutive wins to start the season.

What the man said,


Inter has 14/6 wins under mou in mid season lol

With that determination conte has, we can break inter's record

-Juventus are Winter Champions for the 27th time and in 20 of the previous 26 instances went on to take the Scudetto.

-Arturo Vidal’s joint favourite targets are Roma and Lazio with four Serie A goals each. He netted seven of his eight League goals this season from inside the penalty area. Leonardo Bonucci scored his eighth and Mirko Vucinic the 96th on the day Giorgio Chiellini played his 300th game in a Juve jersey. The Bianconeri have netted in each of their last 31 League ties for a total 63.

why you blocked johniet from posting -.-
anyway...

Don't act like you are to smart to me, answer what I asked

What did johinet do wrong Dev?

I truly respect you Devi but wtf is that???? go ahead ban me again, all that arrogance...ptff IM OUT

Similar topics
» The Nerazzuri Zone
» Archer - Welcome to the Danger Zone
» Chicago declared a war zone
» is this an excellent stat?
» What do you make of this stat?