Main question is how well they would do tactically? how would they deal with these factors:

Most arguments about teams from the modern era vs old teams, seem to forget that the rules in this sport have changed over time, having drastic consequences on the way the game is/can be played.

So the real question is, could a modern team successfully apply their style of play and recent tactical innovations in the rules and conditions of classical football?

and the question can also be asked vice versa

I'd say for the goalkeeper it would be easy as picking up backpasses is far less challenging than learning to play properly with their feet. The latter still seems to be a weakness of quite some GKs even though the requirement is more an more for a GK to be able to play somewhat like an outfield player, too.

Well some teams now who have zero physicality would struggle, but at the same time. Some of the best teams from a long time ago would have definitely struggled with the intensity of the game and the continuous pressing.

As for GK's picking up back passes, not sure how that would be a bad thing for a modern goalkeeper.

Tomwin Lannister wrote:
As for GK's picking up back passes, not sure how that would be a bad thing for a modern goalkeeper.

I meant the effect it has on the pressing game. Pressing is much less rewarding when the defence or midfield can simply pass it back for the keeper to pick it up.

Forgetting the rule changes for a second, this modern team would oblitirate most if not all teams from the 70's backwards, and probably most of the 80's too.

The lenient officating would need adjusting to but the players would. People think these guys are soft, they arent, they just are allowed to be because even clean tackles are fouls. After some time of realising you arent getting people cards for nothing, they will get it.

And a blatant foul is still a foul, even back then, it just wasnt as heavily punished.

The terrible pitches would be the biggest problem most likely.

Standardized pitch conditions? Just watch La Liga. Teams like Osasuna or Real Betis are PAINTING their pitches with green colour to hide sections where there isn't any grass left. 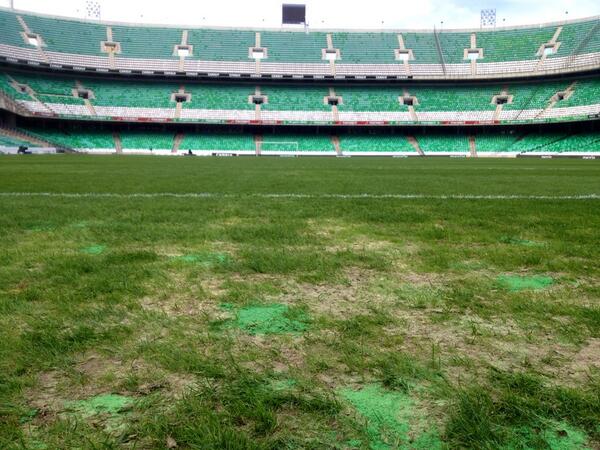 Apart from that - what Franchise said. The game is being played at a different pace now. I mean you look at Barca and you can already see a difference between their workrate from 2010 and 2013 and that's just a very little drop of intensity. Now imagine an entire team running 6 or 7 km instead of 10. It's uncompareable, really.

Yes of course there are poor pitches around today, the point I made was that quality pitches have become a lot more common and consistent, poorly maintained pitches are more of a rarity now. In the past even at the top level and at big clubs pitches would regularly be in comparatively terrible conditions, one week a pitch would be full of divots, the next you could be playing on a waterlogged pitch, then a field that has more mud than grass, and it would be a fairly regular occurrence. Even ones that looked decent would often be dry, hard, and cause frequent irregularities in the run of the ball. I don't see there being a genuine debate on pitches being standardized to a generally better standard now, its an open and shut case tbh.

I sincerely doubt someone has accurately averaged the distance run for AN ENTIRE DECADE of football tbh. I can only presume that refers to some specific competition where distance run was measured, in which case it should not be used to generalise an entire period of history.

But I still have a question mark over how well a modern team would apply their superior fitness and running in a classical setting. The back pass would render much of the pressing (running) pointless (hence most teams didn't bother putting more running in and just stood off instead), and due to the refereeing, it was very possible to deliberately slow the game down to walking pace with constant repetitive fouling, ive watched many games that literally could never get out of first gear because the teams kept stopping play every minute with fouls, and back passes. Some of the most successful classical team were infamous for their mastery of the cynical arts of football, where they'd make impossible for their opponent to play a nice looking game.

My general point is that teams are moulded by the rules and conditions they are playing to. Its all well and good saying a modern would destroy a classic one, but the fact is they would find those differences I've described hard to bare. It would not be a nurturing environment for them at all.

It doesnt have to be accurate, nor for an entire decade...but its pretty much a fact and even clear to the eye, players run a shit lot more now than they do in the 70's.

I also dont agree with 2 things you said.

1. Passing back to the goalie would not making the pressing pointless. Pressing isnt only to win the ball back high up the pitch, thats the optimal result, but a excellent second result is having the goalie or defender hoof aimlessly. See Madrid-Barce prior to this year, Madrid were delighted to have us hoof because they will win nearly every aerial ball and many of the second balls. A darn sight better than having us pass into midfield.

2. I also dont agree that the amount of running is in the pressing. Even teams who dont press run a ton more. They are just physically better and get up and down the pitch more often. You have surely seen the footage, at times some games look like the majority of the attacks are counters. They are not, simply the players are not getting up and down the pitch as much. Players are better trained, sport science has improved and simply, people know and understand more about physical fitness and preperation than ever before.

Every single team gets 10 players back (some teams all 11) behind the ball in todays game when they can, every team. The only time they do not, is when the counter attack beat them back (ball obviously moves faster than you can run). Never happened back in the day.

Name the team most known for defensive play in the 60's and 70's?

Probably the name you think of is Herrera's Inter, famous for their Catenaccio. It was never restricted to one single formation, but most often they left 2 men with very little defending to do. Its often been said and for me its true, what Inter did back then for those standards were incredible defensive nature, but by todays standards...nothing. Mou's Inter were comparably even more defensive.

Speaking of dark arts and stopping the game, this Inter team were a prime example of such. Still were crushed in the end by superior football.

Yes, the differences would be difficult for the modern teams, of course they would. But they are all adjustable, the modern teams would have no reason not to adjust to them.

But there is no adjustment you can make for superior athletes running twice as much as you.

I love old football, some of the old teams and legends are like the soul of the game. At times I even prefer football from back then, because it was free, less tactically bogged down and about talent and ability. But I would be naive to think that in a vacuum they would stand much chance directly against a modern team, it just dont make any sense to me.

The Franchise wrote:Forgetting the rule changes for a second, this modern team would oblitirate most if not all teams from the 70's backwards, and probably  most of the 80's too.

Agreed, I'd probably go even farther in terms of your timeline too...

I think it was Rafa Benitez in one of his blogs that noted that back in the 80s the average time on the ball was about 4 seconds, then in the 90s it was 2 and now it's about 1 to highlight the changes in the pressing game. The numbers might be a bit off, but the trend is very clear. Like Dani, I think this intense pressure would be very hard for most teams to cope with at first. They would need at least 6 months to prepare the conditioning for it alone.

The Franchise wrote:Forgetting the rule changes for a second, this modern team would oblitirate most if not all teams from the 70's backwards, and probably  most of the 80's too.

Agreed, I'd probably go even farther in terms of your timeline too...

I probably would do, but I made a safer statement.