Was thinking about earlier how we still don't have a bona fide thread for all things transfers this summer and have been using other threads as makeshifts thus far, splitting most of what we've posted and talked about up to this point between the 'Chelsea 2013/14', 'Who's on our radar?', and Rumour Mill threads.


So any and all things related to players coming, going, gossip, reports, confirmed deals, etc. just throw in here 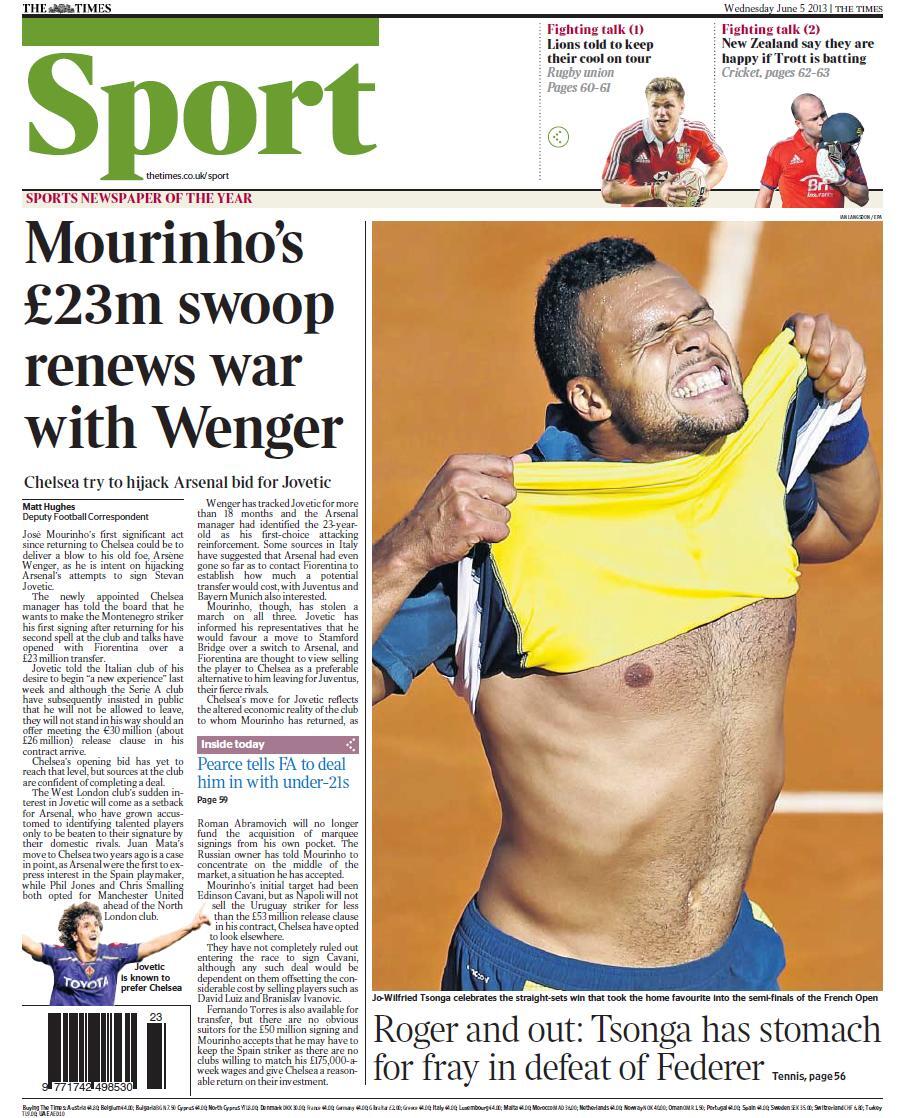 Not sold on Jovetic. I'd much rather get a proper goal scorer over him.

Seriously doubt it will happen. He's in the mould of Mata, Hazard et al. which we have plenty of already though he's possibly a bit more direct than them based on what I've read, and as I cannot see Mou playing a false nine by putting him up top, I'd be shocked if this were true.

I'm gonna get the ball rolling by saying, I firmly believe Signing De Rossi, Cavani/Gomez/Lewandowski/Higauin and a back up GK is the bare minimum we need this summer.

After that we can work out if we want Schurrle, Van Ginkel and Shaw.
http://this11.com/boards/abEUfGhacO.jpg

While I am not 100% sold on De Rossi, I'd like to see someone name a better player who would improve our midfield as much as him.

He has me in his contacts

He has me in his contacts

I would however, take Lars Bender over De Rossi.

Perhaps we could do some kind of deal with Leverkusen?

I'd be happy if this summer came back with.

Shaw - buy him then loan him back to Southampton

Son - Prefer him to Schurrle

I am not sold on Van Ginkel as our only midfield signing.

I actually think De Rossi is closer to leaving Roma than any other summer tbh. This would be the ideal time for him to ship out. Obviously both he and the club are saying that he will stay and that he wants to stay, but there's a lack of conviction there that gives me doubt and its because of that doubt that I will post my thoughts on what he could bring to Chelsea should the unthinkable happen.

De Rossi is more than just a DM or even your typical CM. He's known to be tactically imperious in front of a competent back 4 with an ability to shut down movement lanes of attacking mids and wingers tacking inwards. As you all probably saw for Italy last year, he does have some ability to play at CB, but only in emergency situations. I don't see him ever being completely reinvented there.

Offensively, he's got the quality to spot runs from deep and launch balls forward as well as get out wide and whip in crosses with wonderful technique.

One facet of his game that is a little hyped up is his long-range shooting. He hasn't scored from outside the box in a couple of years, but don't write it off. He's not afraid to have a pop when the chance presents itself, but his accuracy isn't as good now as it was when he was younger.

Beyond his technical ability, De Rossi is a born leader of men which is why he's long considered to be next in line as Roma captain when Totti finally retires. He will bring an aggressiveness to Chelsea's midfield that really hasn't been seen since prime-Essien.

As for price, Roma value him at around 15 to 20m. I personally think he's about 25m-rated, but that's my own evaluation.

The chances of him leaving Roma are still closer to slim, but not none like its been in previous years. If he does leave, our hearts will be heavy, but we'll have some solace knowing that it won't be to a direct rival.

I'd take De Rossi for sure but ideally anything under 15M euros, not sure that will happen though. If I want someone from Roma I want Marquinhos

tbh, The leader thing could well be important. We do lack a leader on the pitch when Terry is missing. He could certainly step up and help groom DL4 into the role.

Not at the prices being talked about

Neutral
No to both

Are you guys fine with David Luiz leaving?

Have n't seen any reactions to my link so was wondering.

David Luiz looks more comfortable in the middle of pitch than at the back. Have n't seen lot Chelsea games, but the ones I watched where he played in the middle he looked good on the ball. Where do you think he will fit under Mou?

That's the problem, I don't know that he will. If he can work with him and make him more disciplined and positionally aware, I think he could be great for midfield. But in his current state, I don't think he's a starter.

). I only hope David is that kind of a player. Attitude is more important when you are with the Boss.

Going back to leadership. You can't find a Terry so easily, it will take time. Rossi is a good choice. Hope we sign him.

David Luiz is the most talented CB we have, he has to be starting at CB or we will have a gaping hole there. He won't be sold.

Kick wrote:David Luiz is the most talented CB we have, he has to be starting at CB or we will have a gaping hole there. He won't be sold.

No question David Luiz is a huge talent , athletic and a colorful character. He is so creative and good on the ball Rafa tried him in Midfiled and he did well.

But perhaps the same can't be said in CB role as he looks little suspect. For a CB 's role- player needs to be a non-sense player and creativity is not that important. e.g. Varane is a perfect CB even at his age. Mou likes such CBs. Barca may prefer David as he suites their style.

It is not a question of he is good/bad. But does Mou think David style of plays suits his? If he stays what's his role?

I wish David stays and matures under Mou.

David aint going anywhere! The best manager he can learn from is Mou, cos its all about discipline. If he can't get the stuff straight under Mou then I don't think he can anywhere. Also, he is not the most talented CB we have right now, he is the one with the biggest potential. For me Iva is the best CB we have right now, yes im drunk but i practiced to type properly, and this took only 1 min...