Gil wrote:For some reason I can't get into the whole medeival themed shows. I mean my entire timeline blew up when it happened while the only thought on my mind was when does Breaking Bad come back on.

Think it's cause I'm a Leo.

I'm serious about predicting it by the way. My sister can confirm.

We need a nomination process for funniest quote of the year.

"my sister can confirm:


HE WAS THEIR FRIEND!

Gil wrote:For some reason I can't get into the whole medeival themed shows. I mean my entire timeline blew up when it happened while the only thought on my mind was when does Breaking Bad come back on.

Think it's cause I'm a Leo.

I'm serious about predicting it by the way. My sister can confirm.

We need a nomination process for funniest quote of the year.

"my sister can confirm:

Anyone getting goosebumps hearing this song?

Also, the problem with bran this season is compared to everybody else, he's surrounded by in my opinion not very interesting characters. To add to this, for a few episodes running it's just been him having idle chat whilst being carted around in the middle of nowhere. I think it's by comparison a lot less interesting than Rob stark waging war, Daenarys freeing slaves, Stannis getting mixed up with the lord of light etc etc.

I think it'll be more appealing when his abilities play a bigger role, like in this episode.


But up until then, it was just him being carted around and talking about his visions/dreams.

Exactly. So why not show the visions instead? In the book he has plenty.

If I were writing it, firstly I wouldn't have done that scene at the start of the season where he was walking/shooting arrows and seeing his family. It should have been him dreaming he was Summer. At first it starts off that it is purely unwilling, but slowly he learns to take control.

Then they could have done a vision or something every couple of weeks as they travelled north.

Then in this ep, finally he realises his powers and uses them to save Jon, and it should have been way more epic... A close up on the eyes as Bran becomes the wolf, and then charging off to save Jon.

Meanwhile you could cut out the crap with Orell and his eagle which has been there to show what greenseeing is all about.

Bran's arc isn't action-packed, but they could have done more with it and made that scene much more climactic. It didn't have to be in this ep for example, where it became a non-event next to the Red Wedding.

Yeah I have no idea what's in the books but what I know is the only way to make people invest in his storyline is to make his powers more of a 'big deal' like in EP.9

Of course, no matter that happened in that episode, it'll be remembered for years for the wedding.

They chose the wrong time to let Bran showcase his ability.

Arya is going to be in a very dark place now, everyone important to her is gone/dead, and we all know what she meant when they asked her who her God is and she said "Death"

So here's the meat, Jaqen H'gar told her that if she ever wanted to learn the skills to be like him, that she should seek him out in a place (Volantis was it? The name of the place escapes me) anyways she will go to that place and train and train and train until she becomes a full fledged warrior/assassin just like H'gar, to which she will kill everyone that caused harm to her family. The Boltons, the Lannistirs, etc. Melissandre said when she looked at her that she sees a darkness or some bs and she mentions the color of three eyes, possibly in the future, the bearers of the mentioned eye colors will fall to Arya's vengeance.

Arya will embark on a dark road, filled with blood and revenge.

Obviously this is a half assed theory, so by all means go ahead and point out whats wrong lol. Im very open to hear what you guys think

I also thought like that in the end of season two , when she got the coin from Jaqen H'ghar. The problem is , it is tooo straight forward for a GoT plot

even though her intentions are crystal clear so far in the show.

Arya is a very interesting character as you know and i don't want spoil anything for you. Tbh , i only read so far ..i don't know much for the time being , but straight forward theories never work in Got , especialy when your House name is Stark

I have a personal theory too , about the Starks. The Starks are nothing without the winter. They become weak and they think and live only for their honour in it's absence . Arya , Bran and John Stark however , are the only Starks who realise their nature before it's too late. Perhaps Arya will want to make things aright again and she will look to have her revenge , i agree..whether she succeeds or not , i doubt it will be pure old fashion revenge.

I already have a semi-ongoing theory about the whole storyline which i can't possibly express right now , because i haven't finished the 5th book and if i explain any further i will be spoiling too much in any case.. I want to finish the 5th book so bad first , i must know as much as possible about 1 particular character before i say what i think to someone who has finished the current books.

Us non-bookreaders need to stick together, we need to look out for each other in our time of need

We can pull through this, together


11.30am: Woke up, sobbing gently into my pillow. Stared outside the window, questioned if the outdoors was really real, or was it all just some big plot twist

12.02pm: Fully washed and ready, I make myself a coffee to help wake up. I see flashbacks from the wedding, I drop the cup and it shatters. As if in slow motion. I cry some more.

2.20pm: An advert for the season finale is shown, can't help but think of the wolf. Throw yet another cup of coffee at the t.v. Then I proceed to curl up into a ball and cry a bit more. I miss the northeners

2.47pm: A friend calls me, I shout at him and hang up, he's clearly not real. It's all just another plot twist. I cry into my hands, I see wolfs everywhere.

I couldn't sleep last night lmao. All i could think was the red wedding. That was like the first time since an episode of TWD.

I still can't get over the wedding. Going to suffer again and watch the episode.

Did you see my earlier post about how I'm going to deal with what I witnessed?

I expected to see you somewhere down the line, as damaged as I am

I'm tempted to watch it just before the finale on Monday (Monday on Sky Atlantic, I want to witness it in HD)

I wonder if the Finale will top this episode. I can't predict anything any more lol.

RealGunner wrote:I wonder if the Finale will top this episode. I can't predict anything any more lol.

white walkers, we don't know what happened to them launching their attack

one things for sure, we will get a huge cliffhanger

Swanhends wrote:
"I do not consider a day lived until I have loved a woman, slain a foe, and eaten a fine meal" ffs

Also:
"I have no interest in slaves, a man cannot make love to property"

I think Daenarys got pregnant from hearing him say that

Btw It's funny how everyone has forgotten about the leeches already. 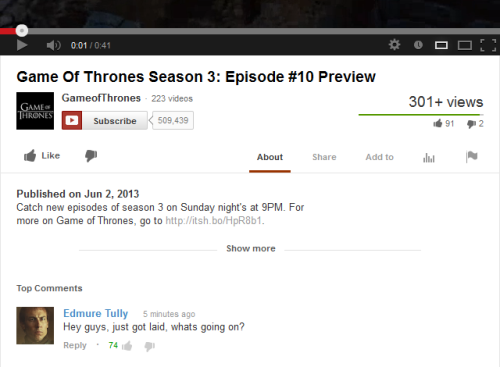 Interesting interview below on where George RR Martin got the idea for the red wedding from.

What about the Red Wedding itself? Is that based on history too?
The Red Wedding is based on a couple real events from Scottish history. One was a case called The Black Dinner. The king of Scotland was fighting the Black Douglas clan. He reached out to make peace. He offered the young Earl of Douglas safe passage. He came to Edinburgh Castle and had a great feast. Then at the end of the feast, [the king's men] started pounding on a single drum. They brought out a covered plate and put it in front of the Earl and revealed it was the head of a black boar — the symbol of death. And as soon as he saw it, he knew what it meant. They dragged them out and put them to death in the courtyard. The larger instance was the Glencoe Massacre. Clan MacDonald stayed with the Campbell clan overnight and the laws of hospitality supposedly applied. But the Campbells arose and started butchering every MacDonald they could get their hands on. No matter how much I make up, there’s stuff in history that’s just as bad, or worse.

McAgger wrote:Btw It's funny how everyone has forgotten about the leeches already.

It's still very debatable whether that was legit or not. The red wedding plot was in motion way before the leeches got burned.

However it's at the very least pretty strong symbolism.

Also, I kind of figured the leeches would give each of the 3 men trouble, I predicted Robb would nearly be killed but overturn it.

But, apparantly, being the main good guy doesn't count for much in terms of invincibility

What gave you the idea that Robb was the protagonist of this story?

There is no 'main' character, but he was the main 'good guy'

) he seemed to be the main guy who was on the good side. Which is normally the viewers side. And they're normally near-unkillable.

McAgger wrote:Btw It's funny how everyone has forgotten about the leeches already.

It's still very debatable whether that was legit or not. The red wedding plot was in motion way before the leeches got burned.

However it's at the very least pretty strong symbolism.

I was thinking the same. We all know how strong the fire god is in GoT. I think the Leeches did have an effect.

Which makes you think if Joffery next to die ? Also i can't remember the 3rd guy Stannis named ?

Revived with her son and husband slaughtered. Not to mention the relatives that were all on friendly terms with her.

Leave her alone ffs. Let her be with the Wolf in Wolfie heaven ffs.

Yesterday at 4:14 am by Robespierre

Yesterday at 3:54 am by Myesyats

Yesterday at 2:35 am by rincon