It means having a goal scored against us by our opponents. I really hope our opponents stop toying around and start playing seriously and actually try to have goals scored for them as well so we can see the level of our defence.

I'd say we're still getting an idea of how good our defence is without conceding.

Cahill and Alonso are the obvious weak links but they're good enough for now.

I'm not sure if it's been said yet, but the thing I love most about our back line is that the wingbacks actually are wingbacks.

So many sides claim to have wingbacks and 3CBs, but in practice it's just a 5 man defense

Yeah, Moses is a quality WB, Alonso is solid but slow.

Both cover their entire wing effectively.

Just did some calculations on a whim. If we conceded 2 goals in every single remaining game from now till the end of the season, we'd still finish the campaign having let in 2 fewer goals than we did last term. Madness.

This is a byproduct of Conte never letting go of requiring his players' full concentration for 90 minutes, even when the result is largely secured. It wouldn't seem a problem to concede a 3-1/4-1 at the end, but in the long run it creates a a recurring problem when players gets lulled in a false sense of security that could be deadly when the lead is of 1 goal only. That is a huge reason our defense is doing so well.

And lol @ that stats. It really puts things to perspective knowing where Conte started and where he is right now. Compared to Mou and Pep who are pretty much in the same spot as last season, and Wenger who is always critized for never achieving anything more than a top4 for years.

What do you guys think about utilizing this thread to analyze how and why the goals conceded happened? Sort of like the "whose fault is it?" thread in the Pool section.

I blame Conte for this one. In the whole first half vs Spurs we suffered them a lot because Kane would drop and roam a lot, their AMs would get in between our midfield and defence and he didn't fix the wide gap between our cms and cbs until the second half. On this instance in particular tho, I blame Cahill. Kane was on the left and Azpi was taking care of him, there is no reason why Cahill left so much space between himself and the nearest threat in Eriksen.

We suffered on our left flank the whole game because Eden didn't track back enough and Cesc is no Matic defensively. On the goal's instance it was Alonso and Cahill's fault. Kun is back to goal, which is not his strength whatsoever, and Cahill is closing him tightly, but Alonso decides to close on him and leave acres of space to Navas

Then Cahill goes for the most uncoordinated interception ever because he can't use his left foot and scores for them.

Well, this is a bit of a *bleep*. I think it's both Cahill and Luiz's fault. Cahill got outjumped way too easily, and Luiz was just carelessly walking not marking anyone and forcing Azpi to mark both #18 and Martis Indi at the same time and one of them scored.

This is the *bleep* of *bleep* lmao. Kante, Cahill, Luiz at fault. Kanye completely whiffs the ball in a dangerous place, Cahill slips two times in our box

, and Luiz doesn't try to tackle Crouch who is 1 inch from him and in the *bleep* centre of the box but decides to go on our goal's line

Cahill and Alonso at fault for City's goal. The rest is a fair assessment.

I am fine with you doing that, as long as you're not overly critical, sometime you just have to chalk it up to the other team playing well, like Erikson's strike.

The combination of my post (regarding conceding two goals in every game from now to the end of the season) and yours (vowing to analyse every one we concede henceforward) is looking frighteningly too much like a jinx/GL curse in the making. Especially as we did in fact ship 2 today the very next game after my comment. We're doomed

In no way, shape or form I can jeopardize a Chelsea season with one of my posts http://www.goallegacy.net/t37312-how-big-of-a-pounding-are-chelsea-going-to-put-on-the-2015-2016-pl? 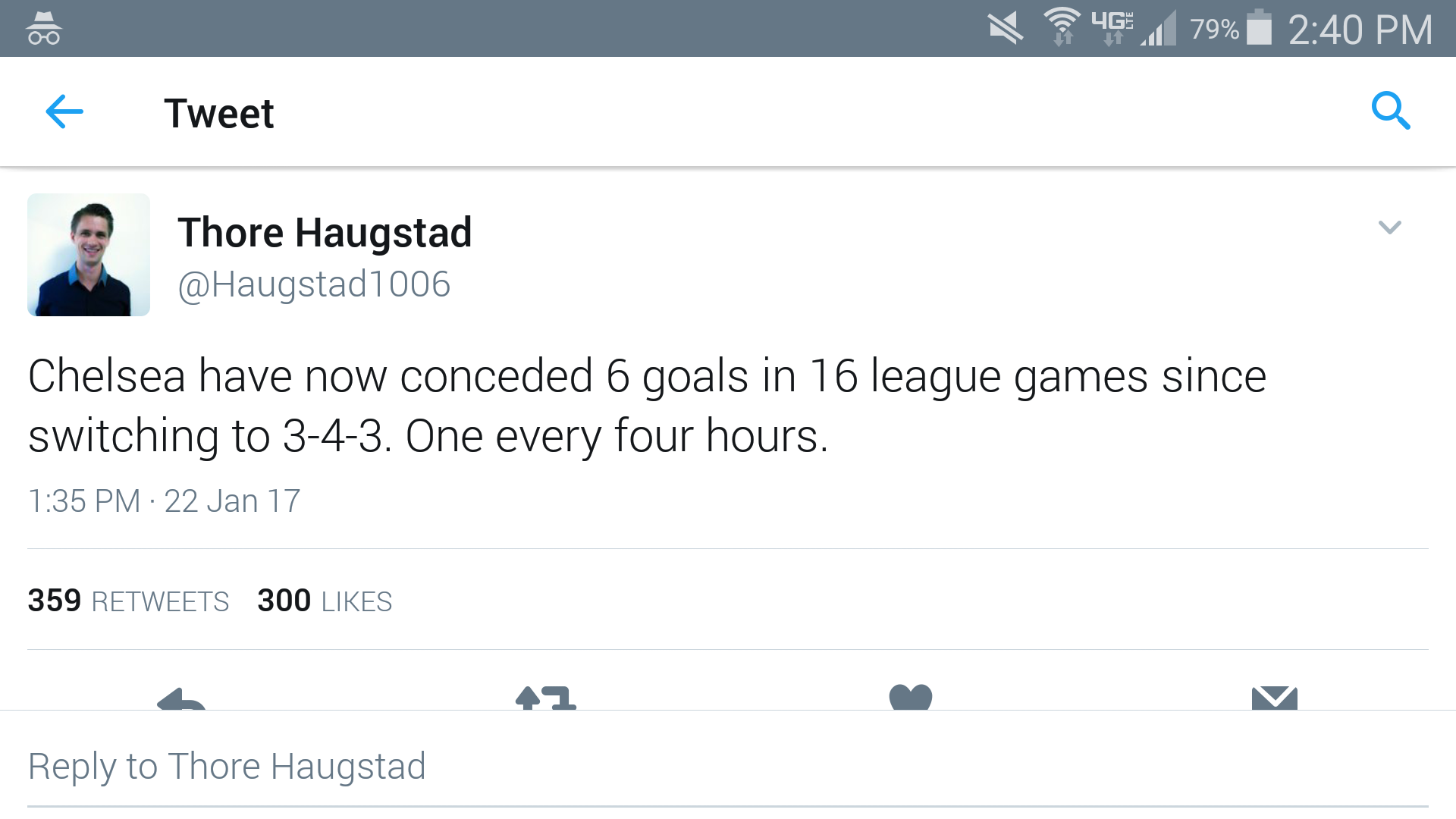 I'd say that's the biggest reason why we're 15 wins out of 16 games since switching to the 3-4-2-1. Everything is easier when you have an impenetrable defense.

And it's not like we played even one single game with the gameplan of not conceding. The fact that we didn't record a single 0-0 indicates that we never really parked the bus, we always played our game, imposed our will, and it just happened that we're conceding such a low amount of goals thanks to Conte's defensive organization and individual's brilliance from our lads.

@Katy Perry wrote:I'd say that's the biggest reason why we're 15 wins out of 16 games since switching to the 3-4-2-1. Everything is easier when you have an impenetrable defense.

And it's not like we played even one single game with the gameplan of not conceding. The fact that we didn't record a single 0-0 indicates that we never really parked the bus, we always played our game, imposed our will, and it just happened that we're conceding such a low amount of goals thanks to Conte's defensive organization and individual's brilliance from our lads.

Not having to worry about conceding always makes it easier to score, too.