Nah, Ibra has that ability to put the whole team on his back when he scores goals. It's almost as if the dimension of his goals take another meaning, like Kun is currently doing at city, or Falcao last year with Atletico, and RVP with Man Utd last season.

urbaNRoots wrote:As a neutral, I would rather have Agüero in my team. His finishing is ridiculous, the way he scores from difficult angles, dribbling, creating, big match or not, he has it all, Agüero is simply the complete forward. Oh and he doesn't miss half the season with suspensions, which is a big plus

Red Alert wrote:Suarez does all those things. And Suarez is complete, lol.

Suarez misses roughly 8-10 games from suspensions, Aguero misses half the season from injuries.

Suarez' finishing is atrocious and you know it

Aguero on the other hand is one of the best finishers in the world.

Suarez this season (where the burden isn't on him but shared between him and Sturridge) has similar stats to Aguero in terms of goals from shots ratio.

I'm not a fan of using stats, but everyone seems to use stats to attack Suarez, so I'm going to defend him using these same stats.

Comparing the rest of top 5 goal scorers (forwards) in the league right now:

But yes, with the eye test and all, Aguero is probably the best finisher in the league (it's either him or RvP for me). I just didn't agree with him only being better at doing nutmegs is all.

Mr Nick09 wrote:Best striker in europe, yes i said it, i will own it, suck it

Ibra is the best forward in Europe after Messi / Ronaldo.

How old is he? This is no kneejerk but I expect him to reach the level of Batistuta or better when he retires. Most talented Argentine after Messi.

M99 wrote:How old is he? This is no kneejerk but I expect him to reach the level of Batistuta or better when he retires. Most talented Argentine after Messi. 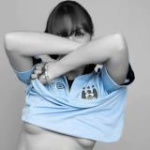 Aguero, I always liked this player (very talented). I wanted him to play along side Messi at Barcelona one day but with Neymar and Alexis great form its impossible now.

Hopefully, with Messi they'll lead Argentina to win the World Cup this summer.

M99 wrote:How old is he? This is no kneejerk but I expect him to reach the level of Batistuta or better when he retires. Most talented Argentine after Messi.

No chance. Aguero is talented, but Batistuta was a level above.

Never watched Batistuta so I take your opinion over mine, but it is worth mentioning that Aguero is just 25 years old. Still has many good years in him potentially. I really just like watching him play. Wish it wasn't for Man City.

Let's not get carried away here, Hernandez is third on that list

Hernandez gets it done off the bench, hence less minutes. He might be a scrub on the ball, but he gets his goals

Chicharito is very underrated as a poacher, no one called him Messi or Zidane just a good poacher.
Cbarca is just hating

Pique and Mascherano, the art of defense.

Becides who needs Pique and Mascherano when we have Messi

2011, that magical year when messi was still defending

True, but City have Aguero/Dezko/Negredo/Navas/Silva/Toure, who Pique/Masche have to deal with and there will be more pressure in the CL match any error can hurt them.

FPL players, this is your cue.

El Chelsea Fuerte wrote:What's there to appreciate about him? The guy's a ****.

F*cking jealous he roots for Torres rather than Messi.

Page 4 of 11
Permissions in this forum:
You cannot reply to topics in this forum
Latest topics
» 2022/2023 Premier League Discussion