An Anfield legend, but we need a better 3rd choice CB, don't you think? Jamie's just not up for it any longer, imo.

Coates should have started....and Wisdom should be called up from the reserves, Carra is past it!!!

I don't think we'll be spending money on a CB anytime soon but Vertonghen is available for about 7mill i think. He's the best choice imo and i'm sure Red would agree.

Only had two things to do all game

Past it. Nothing more, nothing less. Was at fault for the first goal and made a couple of other notable mistakes.

Was at fault for both goals poolsuporter.....At this point Kenny is riding his legendary c*ock when clearly he's not up to it anymore

Could have been three goals where Jamie was the closest defender. Who was that Arsenal player who cut in from the left near the end of a game and got an easy shot away inside our box? Can't remember, but Jamie was nothing but a passenger there, too.

Please, Kenny, stop playing him before I will start hating him. Coz now I'm merely a little sad and frustrated. But it's time to give Coates a chance, it's so bloody obvious.

disgraceful depending on rvps 1st goal

Can't say I believe Coates would have performed better today. I also don't think Vertonghen would be a good choice as a 3rd choice CB... he wants to be and needs to be a starter where-ever he goes, and neither Agger nor Skrtel deserve dropping for him.

Also... I don't understand the criticism of Kenny over this. Carra is an experienced defender who's a leader, in the absence of Agger he was the obvious choice to come in.

RedOranje wrote:
Also... I don't understand the criticism of Kenny over this. Carra is an experienced defender who's a leader, in the absence of Agger he was the obvious choice to come in.

I'm not sure about that, man. Carragher hasn't been good at any point of this season.
It's just that we haven't seen enough of Coates to tell whether he should have played or not. But starting Carragher is becoming Kenny's weakness, imo. Give Kelly a game at CB if needed and Flanagan / Robinson in FB, but I don't fancy seeing Carragher against a firepower like Arsenal's ever again.

Lets be honest, carra was the obv choice, coates was no way going to get the game time time ahead of him, carra as red said, is a leader and organizer, he messed up, end of it, id rather now focus on given coates or kelly game time rather then carra as 4th is finished.

Only criticism of kenny was making the sub so late and shouldn't of taken downing off, he was playing good.

"I was a bit surprised to be playing. The Premier League is a step up, the Carling Cup and Europa League don't have the same intensity. It's frustrating [not to play] but I understand the stage of my career now and I'd never cause a problem here. I'm delighted to be involved and I'm here if the manager needs me."

It's hard to find LFC fans who are happy to see Carragher start BPL games nowadays and I (too) think he's not good enough any longer to be relied upon time and again, but his attitude is simply superb. Legend. Legend.

Put in a great display. Although he did make some mistakes, he put his heart out for the team, which is more than we can ask from him.

Plus provided that assist to our equaliser

He definitely looked far more physically drained after today's match than I think I've ever seen him. I don't even believe it was simply down to lack of PL playing time and fitness this season; age really seems to be taking hold. Judging by his comments (as quoted by Art above) it seems he realises/feels this is the case as well.


I really hope that if he doesn't extend his deal he takes up a coaching role. Would love to see him working with the youngsters and his love for the club would be infectious, I think.

RedOranje wrote:He definitely looked far more physically drained after today's match than I think I've ever seen him. I don't even believe it was simply down to lack of PL playing time and fitness this season; age really seems to be taking hold. Judging by his comments (as quoted by Art above) it seems he realises/feels this is the case as well.


I really hope that if he doesn't extend his deal he takes up a coaching role. Would love to see him working with the youngsters and his love for the club would be infectious, I think.

Yeah, his face was covered in sweat after just 10 minutes and stayed that way until the end, whereas someone like Enrique who ran up and down the flank looked as dry as ever. Carragher is no doubt past it, but performed well today; still I'd start Coates the next time we need someone covering for Skegger in a BPL match.

IMO Coats should be considered as 3rd CB.

Liverpool defender Jamie Carragher has announced that he will retire at the end of the season.

The 35-year-old has made more than 700 senior appearances for Liverpool, and is second only to Ian Callaghan in the club's all-time appearance table.

Carragher, who won 38 caps for England, will leave the club in the summer.

"I'm making this announcement because I don't want the manager to be answering questions when I've already decided what I am going to do," he said.

Carragher, who was out of contract at the end of the season, joined Liverpool's youth system aged nine and made his first-team debut against Middlesbrough in January 1997.

He was part of the Reds side that won the Uefa Cup in 2001 and Champions League in 2005, and picked up two FA Cup winners' medals and three League Cup titles.

"I will be fully committed between now and the end of the season to doing the very best for Liverpool Football Club, as I have done my entire career since joining aged just nine," said Carragher.

"It has been a privilege and an honour to represent this great club for as long as I have. There are many memories I want to share and people to thank, but now is not the time for that.

"I won't be making any further comment on this decision until the end of the season; all our focus and concentration should be on achieving the best possible finish in the league this season and trying to win the last remaining trophy [Europa League] we are competing in."

A legend set to retire.

Legend in his hay day, true Liverpool legend. Only one left now.

Imagine the first squad photo without Carra since 1996

This will truly crush me. It'll be worse than when Owen, Torres, Fowler, Hyppia or anyone else left. Carragold is and will forever will be my favourite Liverpool CB no matter what. It'll be even worse considering the Scouse Iron Man just has had a resurgence in form in proving everyone who doubting him wrong. We will miss his big game presence and strong command of the back line.

I really hope he extends just out of sentimentality.

We all knew this was coming and yet hearing this news brings tears to my eyes. The hair on the back of my neck are standing. We will never see the likes of Jaime Carragher again. He was more than human. He was a god amongst mere mortals. One of my favorite LFC players and my biggest idols. Nothing we can ever do will repay the debt we own this great man. Sad day for football the day he hangs up his boots.

Hopefully one day Carra can be the second coming of Shankly. And I hope he joins our staff right away.

While it's sad to see such a legend retire, I think it's good that he retires while he is still at top level. It would be more sad if he desperately tried to play at Liverpool way past his expiry date.

This guy embodies the spirit of Liverpool Football Club. He has been the voice of the people & the heart & soul of the team for the last 15+ years. A man who has worked beyond advisories & injuries. Has carried the teams spirit in his heart in everything & anything he did. A scouse who was born a red, bleed red & will forever be one of the greatest men to wear the Red.

Words cannot describe the dedication this man has given for this club. We say that Liverpool Football Club is a lifestyle for him it's his ENTIRE LIFE.

For me he is & will be the greatest believer of our club.

"Some people believe football is a matter of life and death, I am very disappointed with that attitude. I can assure you it is much, much more important than that" 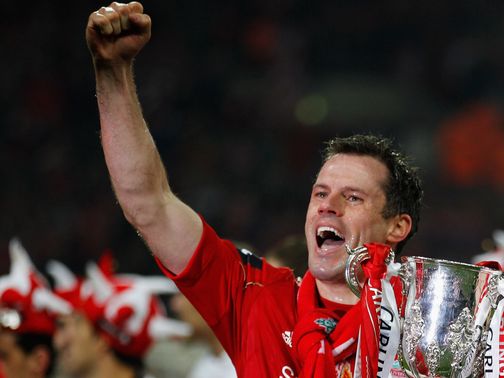