Aside from the last bit

I go into 'warmaidens' to buy some ore I need for a quest, and upon talking to the guy there he said to me 'I should bash your skull in for all you've done'

I was gonna kill him but I decided not to, and googled it

Turns out he says that if you cause his wife to die, who I didn't remember killing or getting killed as she's really useful but I figured when vampires attack the city from time to time she's right next to the gate

So I go to the hall of the dead place which I never knew about, where citizens who die in the area go and you can see their coffins (Seen some old names in there from my adventures

) so I loot a couple of their corpses and move on.

But she's nowhere to be seen. So I figured she must've been killed recently and her body would be lying somewhere

So the plan was I'd find her body, use my 100 conjuration to permenantly make her my undead follower and go and beat the crap out of her old husband for threatening me

So as I'm walking to the shop I see something...

So after all that the guy threatened me for no reason... I had a good laugh and we all moved on.

Spoiler:
Then I killed her out of spite 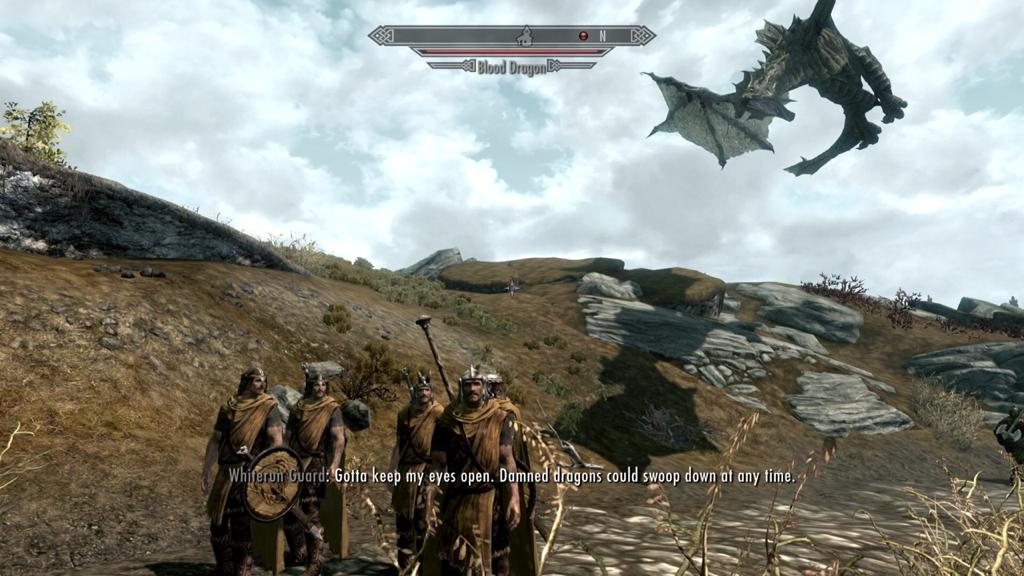 
Something that's not supposed to happen, happened earlier

Made life easier for me tbf


Something that's not supposed to happen, happened earlier

Made life easier for me tbf

I don't know what the high level vanilla dragon spawning is like (because of Deadly Dragons) but I have had more than one dragon in Vanilla; although I think it's a coincidence between a randomly spawned Dragon and a Dragon that's normally found in the world space.

Yeah if it happens I guess it's one that's predetermined to spawn and a random one, no idea why they attacked each other though, sometimes I think the game just loads awkwardly

The game loads awkwardly anyways, if you do't have vsync turned on for some reason when you load up a new area the physics of some objects go haywire, I've loaded into houses with stuff flying everywhere xD

Got Skyrim on PC

Tried running. Got into the opening scene till the character making before a BSOD OUTTA NOWHERE.

At least I can run it with Intel HD 3000 graphics

(just asking cause I've never hear of a BSOD with Skyrim being the cause >.>

nah skyrim isn't the cause. My computer is a mess. I know the problems with it, but I am too lazy to fix them. That's why I was asking for your advice in the other thread.

Oh man I have to lookup which Rootkit it was, I've "treated" it at least 3 PC's with it this year. Basically random BSOD's with a message DRIVER_IRQ_MORE_OR_LESS_EQUAL (or something of the sort, forgot the exact wording) are you getting that sort of thing?

I'll PM you when I remember which one it was.

I just saw my mod list is over 230... Dunno how my installation is stable but thank Talos it is lol and that's with Open Cities: a notoriously unstable mod o_O and a few script heavy mods.

That is quite sexy in all fairness

Phritz wrote:Oh man I have to lookup which Rootkit it was, I've "treated" it at least 3 PC's with it this year. Basically random BSOD's with a message DRIVER_IRQ_MORE_OR_LESS_EQUAL (or something of the sort, forgot the exact wording) are you getting that sort of thing?

I'll PM you when I remember which one it was.

Basically the intel drivers for the graphics are causing all sorts of problems. I downgraded it to an earlier version and it works alright so far. Apart from that, I think I have a heating problem while my windows seems to be corrupted. My HDD seems to have a lot of bad sectors too.

faulty RAM (that's the actual issue with your GPU - the integrated card borrows system RAM to use as VRAM and if it takes the part that's faulty the driver will catastrophically crash and BSOD), faulty HDD, cooling issues... How the F does it even start up o_O

ntoskrnl.exe isn't just any driver, it's part of the "core" of windows itself (It's short for Windows NT Operating System Kernel) which when attempting to acces the faulty part of your RAM will also BSOD) :/

Lol you don't want to know.

I did the memtest up till 9 passes and it came out clean. I should have went beyond that. But I don't know if it's actually the RAM or the faulty drivers writing address to the wrong/non existent stack. I setted up driver verifier and that's when I started getting the special bool bsods. But I am getting it a lot less since i downgraded the driver.

I'll rebuild my pc soon. The last time i did it, i ordered parts which were low on stock so they were probably faulty to begin with.

I did not know about the dragon.

According to Bethesda only 8% of Skyrim have used mods.


What a travesty considering the vanilla game is downright average.

Amazing the stuff you keep finding out about the game

Thought I knew everything, nope. There are even bosses I never fought lol.

64bit (it's the current limitation to modding Skyrim)

And knowing how Bethesda mods work it'll probably 99% of mods that will be compatible.

If you haven't played Skyrim with the Interesting PC's mod than when the remaster comes you must.

Yea getting it for ps4. Never played it before so excited for it


Wonder if the remaster will contain all the DLC?

I don't know for sure the details, but I'm sure it will RG.

Do you have a PC that can game? You really ought to get it for PC so you can mod. Phritz and ES aren't kidding around

Shit man if most of them mods are there i'll change my mind about day 1 purchase.

It was confirmed at the announcement that it's coming with all the DLC and Mods lol.

I already have skyrim on PC.

Page 22 of 24
Permissions in this forum:
You cannot reply to topics in this forum
Latest topics
»  USA Gun Violence & Police Brutality Thread