Our best back 4 by a long shot.

Please come back to the starting XI Martin.

When compiling the recent article that I posted where I looked at where teams conceded shots from I came across some interesting findings in relation to Liverpool.

We’ll go for a slight recap and start with the good news for Liverpool; as a defensive unit they were extremely successful at forcing teams to take shots from poor shooting locations:

So good were Liverpool in forcing teams to shoot from non optimum positions that they only permitted 18% of shots to come from what I have defined as the Prime location. As you can see, this value ensured that they led the league quite comfortably in terms of this particular metric. Of course this fact raises potential questions around how Reina performed in keeping out shots given the great job that his defence did in front of him. That question can remain unanswered until another day.

I want to look at another feature of Liverpool’s defending that caught my eye; which side of the pitch did the conceded shots originate from.

It surprised me a little to see that 47% of all the shots (excluding headers and penalties) in the Big 5 European leagues last season came from left of centre, 19% were straight on and just 34% came from an area to the right of centre. I can only presume that the large number of shots from the left side of the pitch is due to the predominate use of the right foot when shooting. It is obviously much more natural for right footed players to shoot from the left hand side.

From a defence viewpoint the image below shows the areas of the shooting zone that I am defining as right, left and centre of defence:

Which side of the pitch did the Premier League teams concede shots from last season?

Remember, this table is from a defensive viewpoint, and has been sorted in descending order on the Right hand side.

Their figure conceded down the right of 54.4% is more than 2.5 standard deviations from the league mean which is significant at a level of 1%, or in layman’s terms “there is definitely something happening that causes so many shots to come from Liverpool’s right hand side”.

Is Glen Johnson at fault?

The first possible explanation for this fact that jumped into my head was “Glen Johnson”. Although Glen Johnson offers Liverpool great attacking potential, in fact he averaged 1.5 shots per game last season which put him just behind David Luiz in terms of attempts by defenders; perhaps these attacking forays come at a price to Liverpool.
I am aware that Johnson didn’t play every game last season and I haven’t yet went to the trouble to separate the shooting statistics for the games that he did play versus the games that he missed.

Whatever the explanation it certainly seems that Liverpool is much more open on their right hand side than any other team in the Premier League. It’s safe to assume that this fact won’t have gone unnoticed by Premier League managers.

I’m interested to hear any other possible explanations for the heavy bias of shots conceded down Liverpool’s defensive right side.

Thoughts on which part exactly?

The fact that many people attack our right hand side so go down their left?

Logical answer would be there was too much rotation. Johnson, Wisom, Skrtel and Carragher all played a part there so by the time everyone settled and adapted to it all, they would of had shots go against them. GJ also suffered from fatigue towards the end of the season so was caught napping a few times. Our midfield was also overrun many times before (and to an extent, after) Lucas came back into the starting XI so it was easier for teams to put pressure on us and open the team up. 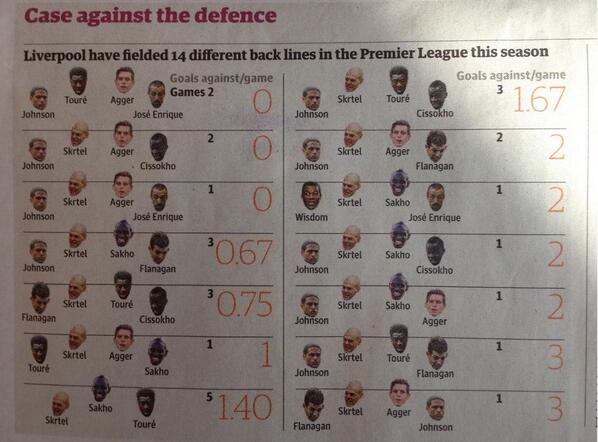 That's only because nearly everyone of our defenders has been out injured for a period of time.

I thought this was the Mignolet thread.

I was trying to say Mignolet will be a lot better next season (after his dip in form from December-January) because he's had different sort of defences in front of him.

With that said, it could also mean our defence will be a lot more solid next season when we have a settled consistent defence. Because we have struggled with injuries this season.

I know Irish_Catalan_Scouser also went by the name BarcaPool. Question is, is he still around in another name or have we lost him! Also YNWA/NJ/New Jack/Red Alert are all same, right!!!

I have seen these three partnerships since I started to watch Liverpool games.

Do you guys think we will have another such partnership in the near future (next season)!!! If so, which two do you suppose will anchor our defense for a considerable time with great competency???

Similar topics
» OFFICIAL THREAD -Juve - X [ MATCH THREAD,NEWS,LINEUPS,MATCHES, PRE-SEASON ]
» Official "I want to hit Neil Lennon" Thread. A.K.A Juve - Celtic game thread.
» The Rage thread Pt 2(AKA lets go for CL and Copa and forget about liga thread)
» Old Men's Thread: The official Bill, Shaven & Sportsczy thread
» Is this the best birthday ever? (AKA the Thank You Serbia Thread AKA I am a Happy Chilean Thread)

Today at 5:50 am by The Demon of Carthage

Yesterday at 8:38 pm by Myesyats

Yesterday at 5:24 am by sportsczy

Yesterday at 1:39 am by Arquitecto