Got Lukaku from my Ultimate Team returning player packs, sold him and built my usual Serie A squad 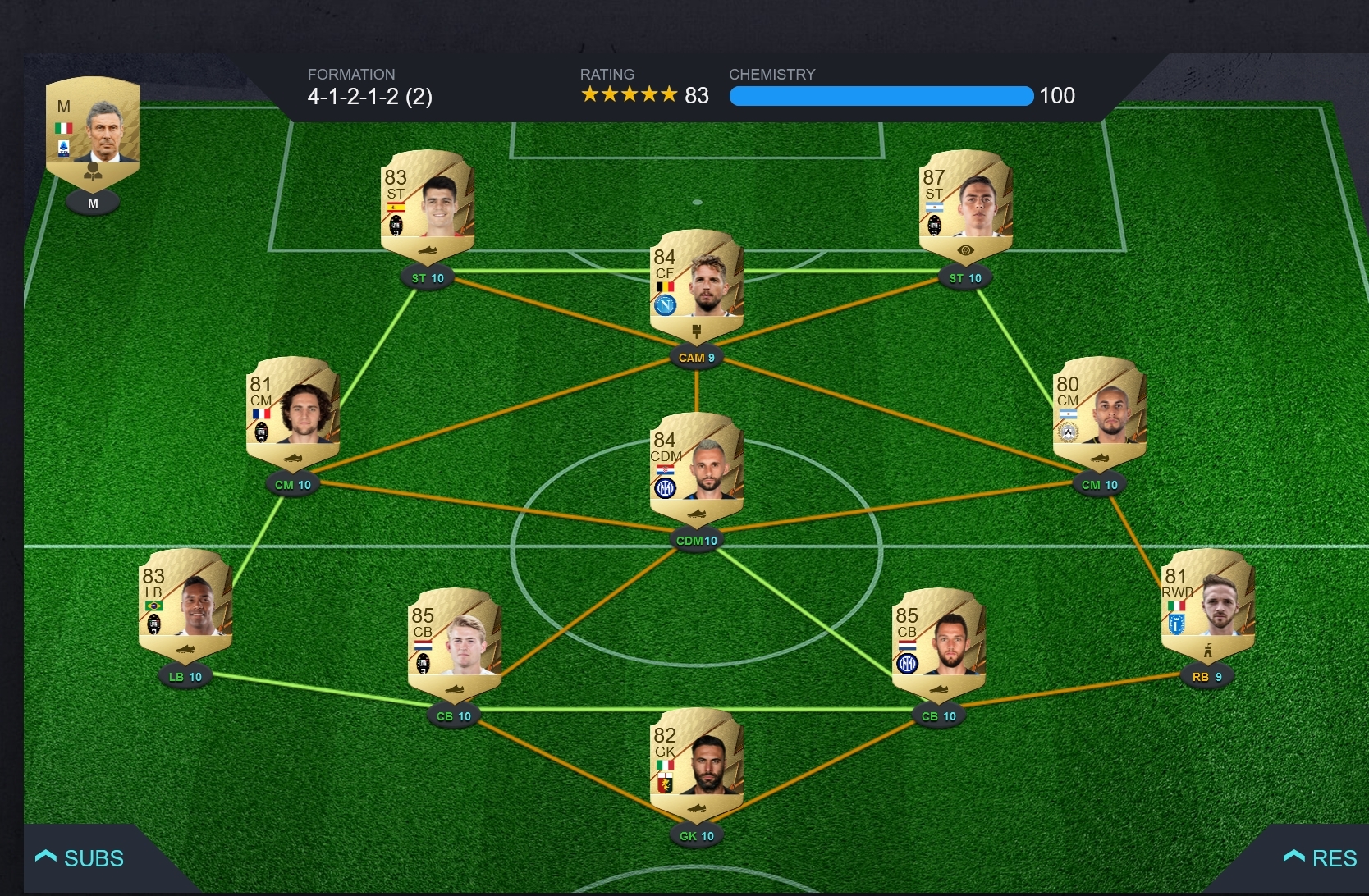 Even in the lower divisions i'd be facing Messi 99, Griezmann 99 all special cards with funny colors. The game is based only on counters and so arcade it's basically unplayable for me. My average match would be a 7-5 loss or something.

I haven't played Ultimate Team properly since Ealy 2017, I saw Di Natale is in the game this year as a 'FUT Hero' and felt nostalgic AF. He and Miccoli were in my team every year for half a decade.

But yeah I've looked around and they go overboard nowadays, 99 rated everyone with rainbow coloured cards etc.

Di Natale and Miccoli are part of the FUT folklore

Back then most people played with normal cards until the highest divisions. Special cards were actually scripted and often worse than the original version. A good trick to avoid the script was to put bronze players on the bench. Like many addictive games FUT was always objectively shit tbh

Day 1 due to lack of games this year. Specially on the MP part. Price for the game over here is cheap for some reason.

Another year another suffering of clubs.

who do you play clubs with these days?

Tom, Mole & MT. But haven’t seen MT since PS4 so probably dont have a PS5 yet.

Is career mode worth playing yet? Don't like playing online.

LeVersacci wrote:Tom, Mole & MT. But haven’t seen MT since PS4 so probably dont have a PS5 yet.

LeVersacci wrote:Tom, Mole & MT. But haven’t seen MT since PS4 so probably dont have a PS5 yet.

Lol he pops on here and there only because we need a 4th. Luckily he does 1-2 before he rage quits. If we have a 4th then we just avoid him.

Getting the ea play early access too. Want to see how it is. Might buy it if any good

man i just want to play Fifa and these guys have put in an entire RPG set up. Surprised there isn't a grind system to find 250 hidden messi shirts in Paris

What has fifa become?

EA only care about Ultimate Team mate. Rest is just there.

there's some real weird visual glitches in the game on PS5 though, ball and players look like they're in the matrix and malfunctioning at times. Hope it's fixed for full release. PPL are saying it runs/plays better on PS4.

Firenze wrote:EA only care about Ultimate Team mate. Rest is just there.

there's some real weird visual glitches in the game on PS5 though, ball and players look like they're in the matrix and malfunctioning at times. Hope it's fixed for full release. PPL are saying it runs/plays better on PS4.

It just feels really clunky and sluggish. Almost feels like how PES used to play out around 2011-2014 years.

it just feels so awful to play.

What is it like? Is it fast paced? Slow paced? How much impact does pace have?

Passing, through balls, rebounds on interception, nerf to skills etc. aswell as semi on through balls & manual headers in MP.

What is it like? Is it fast paced? Slow paced? How much impact does pace have?

It's a great game for MT to use his shitty-shatta 99% possession tactics though.

Its awful. i already had a great distaste for fifa 21, but 22 is maybe even worse. 20 was better than both

I'm done with it. For now, anyway.

Got tired of seeing the same product being packaged up as new. And I get more and more into the women's game, the ratings they put out recently for the Top 22 women's players was laughably bad. They know nothing about women's football. They literally just googled the most popular players and made a list out of them with really inaccurate ratings. And they'll get away with it too. EA are too big. There is no impetus to truly revitalize their IPs when they feel absolutely no repercussions for putting out absolutely mediocre content. They're not going to miss my 60 bucks, but at least I'll feel better about not enabling a company that just doesn't care about this sport.

I don't know if I will even play a football game this year. I may try eFootball (formerly PES), but I dunno if that's going to be any better beyond the actual gameplay. I'll probably just focus on a different sport like NBA 2K22 or something else entirely.

Much better game than 21. 21 was arcadey af with skill & pace spam.
22 is slower and more "realistic" than 21, where you actually need to pass around properly and time/aim your through balls.
No more skill spam, skill cancels, through ball from CB to pacey winger etc.

First online match in 5 years and i made the opponent quit in the first half. Arsenal vs Liverpool too ffs

Will I be able to play tiki taka in this one or is it going to be like fifa 21 where the CB passes to the opposition even though you are clearly aiming at his teammate?

Throwback to the days when I'd play MT and we would have 50% vs 50% possession with +90% pass accuracy each. Fifa version of Barca vs Spain.

Though MT was all about passing the ball into the net. I was about lobbing the ball from Alonso to a free Robben on the right since EA's lofted ball and narrow defending mechanics were broken. Good times.