Is it this going to be the best race of all time ?.

Inter won and dominated last league after February ( Milan were first after first half of season) but they got weakened after this session. They have just lost Antonio Conte (past best manager of the league), Romelu Lukaku (Serie A MVP 20-21) and Hakimi ( difference maker, just think that he wasn't in that"first" Inter 19-20 led by Conte and Lukaku but finished 2nd on table). They were replaced from Simone Inzaghi, Edin Dzeko (from Roma) + Correa (from Lazio) and Dumfreis (from PSV)

Juventus replaced that inept of Pirlo with the Max Allegri comeback, a proven Serie A winner.
They also signed Manuel Locatelli , Euro2020 star, to improve midfield but they lost Cristiano Ronaldo (30 goals last year) and he's been replaced from Moise Kean . No other signings.

Milan , 2nd on table last year, lost Donnarumma and Calhanoglu as starters . They did a legit market where the most relevant signing is Oliver Giroud (and he began good)

Roma spent more money than other clubs, they renewed his attack with Tammy Abraham signing ( amazing start for him) and especially they have signed Jose Mourinho .

Lazio signed Sarri who's a top manager and he was close to win title with Napoli.
Not faced big teams in these two matchdays but they had great beginning that should not be underrated.
As always Lotito didn't invest big money.. anyway they have  still talented team even though  they lost Tucu Correa , but Zaccagni (they last signing ) was brilliant at Hellas . And Pedro passed from Roma to Lazio (It didn't have happened since 1981)
Hype is about Sarri to develop the team.

Atalanta (two 3rd places in a row for them) have a solid and talented team, machine of goals and show , they lost Romero (voted as best Serie A defender last year) and replaced with Demiral from Juve .
Other interesting signings joined Atalanta this session (Musso is a proven great GK in Serie A . Koopmeiners from AZ Alkmaar deserves his hype)

Napoli have talented team, they 've improved about manager (Spalletti means upgrade compared with Gattuso) but signed no players . It is how De Laurentiis acts whenever Napoli don't get qualified for Champions League

Teams are ranked on poll based on their past place last season.

Could Atalanta actually have a go this season?

But 97% it's going to be Juve. The squad is rather poor compared to best European squads, but then the only other domestic top team Inter has been massively weakened and the other squads aren't better at all.
Allegri is a winner who will make the team function.

yea seems like a good a time as ever for one of the tradition 3rd to 7th placed teams in Serie A to win the league. But Allegri's experience will probably prevail.

ngl i don't have the time and energy to watch the games as much as i'd like to, but i'll try to catch some highlights throughout the season and keep up to date with the storylines

It really is anyone's call this season

But can we see a non-Milan/Inter/Juve team win it this season?

I think its the strongest year for that to happen, not since Roma and Lazio went on that 10 game winning streak a few seasons back (and they still didnt win it)

Inter will win by miles ... lukaku and Hakimi is gone but the core of the team that is best in defense and midfield in serie a still exist. plus they have correa and dzeko apart from lautaro and sanchez which will give them more options.

its upto inzaghi to deliver now. the 2nd 3rd 4th spot will be insane. its frightening to even think about it ...

Inter, then Atalanta as second favorite.

It's incredible that Lotito sold Correa to Inter. Ridiculous move. Strenghthenes a direct rival like that in an avoidable move. Inzaghi is great and will get a lot out of him (again) and the team.

We lost the position of favorites imo after selling Ronaldo. Now we need to sweat again to qualify for CL.

Napoli won't win, they be solid and the ship will be steady, shape will be good, with Spalletti.

Atalanta signed Musso who will have a bigger positive effect than the negative one of selling Romero imo. They should be in the race for the scudetto legitimately.

Roma and Milan are unknowns for me. Milan because I don't believe that Pioli will win a scudetto, but they are the club with the most continuity, a long term plan well executed. Roma because their squad is kind of a talented mess yet they signed Mou who can always compete.

Roma for me. Jose and Tammy makes the perfect combination of a title winning side.

I voted for Inter, Roma may come close. Even with the reinforcement, Juve will severely miss Cr's scoring ability.

Imma be biased and vote Roma. They stand a chance with Mou at the helm and if Abraham stays fit the entire season they will have the punch to dent any team in Serie A.

Tbh tho I think it's still Juve's to lose

so you're saying you'll get sexually aroused if MouRoma wins it?

Better than AS Roma imo 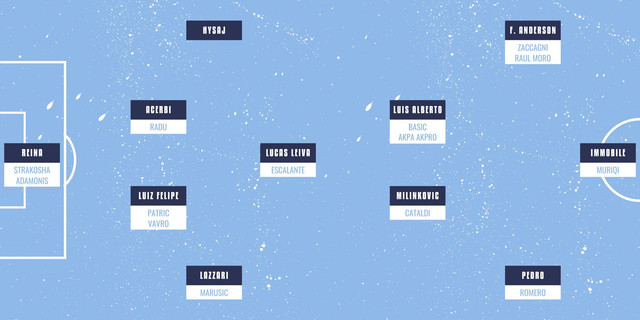 I only see a better Striker but all the others are up for debate. Mhkitaryan is surprisingly immense for Roma too

Well not more than Milinkovic Savic and Luis Alberto

Robespierre wrote:Well not more than Milinkovic Savic and Luis Alberto

There's also Veretout as well who's scored like 10 goals last season and now has 3. Not too shabby for a midfielder. The gap seems close to me right now

Lazio should finish above Roma, better lineup and better coach. Not a huge gap but they are better poised for a good season.

El Gunner wrote:so you're saying you'll get sexually aroused if MouRoma wins it?

We're not winning Serie A

Shouldn't even be in the discussion tbh.

Shouldn't even be in the discussion tbh.

I was the only one to have voted Milan , remembering it in May thanks

Robespierre wrote:I was the only one to have voted Milan , remembering it in May thanks

I predict us to do similarly to last season. We will have a flying start, probably be winter champions, then by the end of the season we'll be fighting for top 4. Its imperative we get some midfielders in January to cover for AFCON. Hell, Kessie might leave anyway.

Robespierre wrote:I was the only one to have voted Milan , remembering it in May thanks

I predict us to do similarly to last season. We will have a flying start, probably be winter champions, then by the end of the season we'll be fighting for top 4. Its imperative we get some midfielders in January to cover for AFCON. Hell, Kessie might leave anyway.

In past it was reverse jinx, Milan wasn't credible

You've been consistent on results for months (since lockdown), you've improved team, same manager, while Inter and Juve have lost their main star

Of course it's just 3rd matchday, I am not writing it for this, it would be ridicolous to make it for the 3rd matchday, but my vote was previous to it

Milan are my favorite for Scudetto, and it is just an opinion who hasn't to do with RJ.
If we had still Lukaku (despite Conte and Hakimi) I would have said Inter but ok we will see

Juve in a small crisis, Atalanta still with their slow start

Well , opinion based on table but honestly

Milan ok , 9 points,  luck on first match against Samp, after 2 massive wins. Last year it was 9 points too , but they hadn't won against Lazio under Sarri. It creates better perception

Inter 7 points ( same as last year tbf) but tbf performance were always good. Tie today was due to 3 easy open chances missed on 2-2 , and after the Sensi injury forced Inter to play 10 vs 11.
It's not a squad that is playing badly, it plays even better than last year on some moments, tie today was very unlucky basically.
Then I believe that we 'll suffer not have Lukaku and Hakimi anymore in future, but atm squad is not displeasuring

Napoli 9 points but they didn't impress me particulary, they've won against Juve just due to big errors .

Lazio looks like same thing seen in past atm, amazing against small teams ( it was under Inzaghi too) but today they didn't get ball against Milan

Roma are better, now they're a squad, last year it was garbabe , but hype about Scudetto 's based on Mourinho.
But honestly they were quite lucky against Fiorentina and Sassuolo, especially today, they've won on last minute after Sassuolo had missed 2 chances in front of Rui Patricio

Juve underachiever as last year, Atalanta with their usual soft beginning. But things will change soon for them - at least surely about Atalanta . Allegri teams need of more time