Darmian is the best inter player in the match. Immense so far.

Lautaro has been embarassing for a whole month, 6 mln every year lol

We should have been 1-4 but yet we're gonna lose this, you cannot stop this Milan

Balanced match so far. Better control from Milan, but Inter looked more dangerous on the counter. They scored their bogus penalty, but Count Tata saved their correct one (that was a major mistake from Toure, never should have allowed the situation to happen, the same can be said off Kessie).

We wasted some chances and good counters by shooting straight into Handanovic's hands or to row Z, and Inter had some extremely dangerous three minutes where they went close twice if not for a Toure goal-line clearance.

Our right flank isn't doing a good job, and I think Diaz is being wasted on the right, especially when you consider the fact that Inter apparently has a green light to foul him all day.

Krunic is useless as an AM, so Ibra has to go back and act like a bloody playmaker, which leaves us without a CF.

Inter better in the first 10 minutes of the second half. Their second or third corner now.

Freaking Bastoni playing like a left-back. When the hell did he get this fast.

WTF is this. I don't understand why Krunic is still playing. Rebic in for Leao, and Salad for Diaz.

Inter can get the ball too easily from us. Much better.

Huge match from Barrella as well (who looks like he is cramping). Vidal in for him.

Close from Ibra. His only chance this match I think. Very isolated.

Very close from Vidal, a massive mistake by Kjaer.

Poor decision making from Kalulu in a promising counter. Could have made something with that rare chance.

Inter much better at fighting for the second ball.

This is not working for us.

Ibra FK, great save from Handanovitch.

Close from Milan, waking up too late to win this.

Close from Kalulu. Not being a LB, he is not passing effectively to Rebic.

Inter are so fucking lucky, should've been 5-1 for us

Saladmaker hits the post, and 6.5 Million a year Kessie misses an open goal.

Inter walk a way with a point 1, Milan with 2 points lost. Milan the better team overall, surprised Inter didn't get a 3rd and 4th penalty as well (we should've had 3 but oh well)

Sure, the penalty was bogus, but inter still could have scored otherwise, and they missed a correct penalty. No major refereeing error otherwise.

I think we would have won it if we played like the last 15 minutes for the whole match. The Diaz RE experiment failed. (Also, we were seriously missing Theo)

Bottled 2 points
Inter wasted again 2 points,  definitely the best team again in a derby , explain me where's the difference of 7 points among Milan and Inter

Kaladin wrote:Inter are so fucking lucky, should've been 5-1 for us

Are you drunk ? Lmao ( I'd be surprised given your religion tbh)

Kessie needs to leave in January, his mind is totally checked out of the club.

Kaladin wrote:Inter are so fucking lucky, should've been 5-1 for us

Are you drunk ? Lmao ( I'd be surprised given your religion tbh)

Why the opposite hyperbole though. Inter scored from a rubbish Penalty, and then Milan shot several chances direct towards Handanovitch before Tata saved another pen. After that, Inter had a great double chance to score (Barella and Lautaro), but Leao had just shot towards Handa and scuffed the rebound to row Z.

The second half, Inter dominated for 25 minutes, with some really good chances, but Milan dominated for the last 15, missing a great Ibra chance, a free-kick, hit the post, and scuffed the rebound.

Pretty balanced in the grand scheme of things, with both GK and defenses playing really well.

Robespierre wrote:now with euphoria ended who explains me why first is penalty and second not ?
Same situation, even same minute 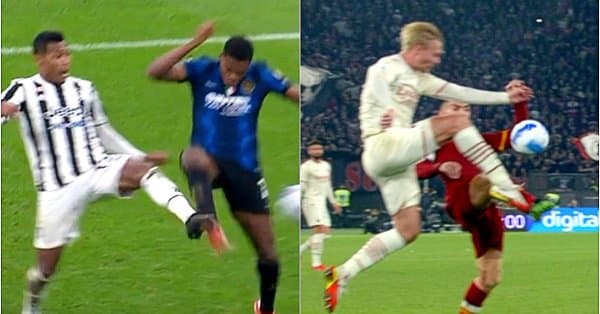 Both are not pens (said so at the Juve match). Competing for the same ball, away from goal, and not compromising a goal-scoring chance. It's barely a foul outside of the box, doesn't deserve a free shot at goal inside of it.

Luca Marelli at DAZN analyzed the decisions, and he doesn't think either are a pen. Definitely not something VAR should intervene in.

Also note, that in this case, a ref could say Pellegrini's foot was actually hitting Kjaer's foot (who was in the air first).

Marelli said they're not penalties because in his opinion they're just contattini (light touches) and those shouldn't be penalties. That's bullshit, they were straight up kicks an you can't do that even if you have possession of the ball, let alone when you're competing for it.