Such a frusterating player. TWO FREAKING PLAYERS WERE AVAILABLE.

Ibra would have killed him for that.

Such a frusterating player. TWO FREAKING PLAYERS WERE AVAILABLE.

Ibra would have killed him for that.

lol delayed feed ...
yep that was welll he should have laid for tomori or whoever to score that

at this point any conceding corners are also bad news for us. bonucci and chellini are both good at towering those headers

lol this game is going to go either way... juve looking threatening that was almost a goal by chiesa

Wasting the freaking counter to win the game.

Juventus 1 - 1 Milan
the last minute mess by florenzi ... anyway very hard fought draw... milan werent good for majority of the game only came bit alive by end of the game after rebic goal.

i dont know guys this milan isnt the same with romagnoli. we always concede something or shaky back with him

A marginally fair result. I think that Milan had the better chances to win the game, but Juve could have scored more than once in the first half.

The wrong game plan from Pioli at the start which bit him on the ass. He should have started Kalulu, who became better as the game went on. Starting with Tomori on the right wasted our entire right flank.

Also, I can't wait for Florenzi to kick Saladmaker out of the starting 11.

Touch start for Juve. Hopefully, they wake up against Inter.

i agree . juventus could scored more in first half. they also had counter with rabiot and he placed wide. dybala had opportunities, then later on kean came up and almost scored, so did chiesa.

and LS, u got that right, tomori shouldnt have started as RB when we have two dead slow CBs in kjaer and shaky romagnoli. we needed tomori's pace which was used in wrong position. kalulu injected better stability in the flank so tomori can solely focus on CB and that gave security to romagnoli too. kalulu missed few opportunities but thats ok its not fair for him because he just played his first match this season.

and i agree when u said like diaz and leao has one touch too many. florenzi i have reservation so i would rather like to see messiah soon fit to play on that flank. milan need him to be fit asap. also pellegri dunno whats up with him too 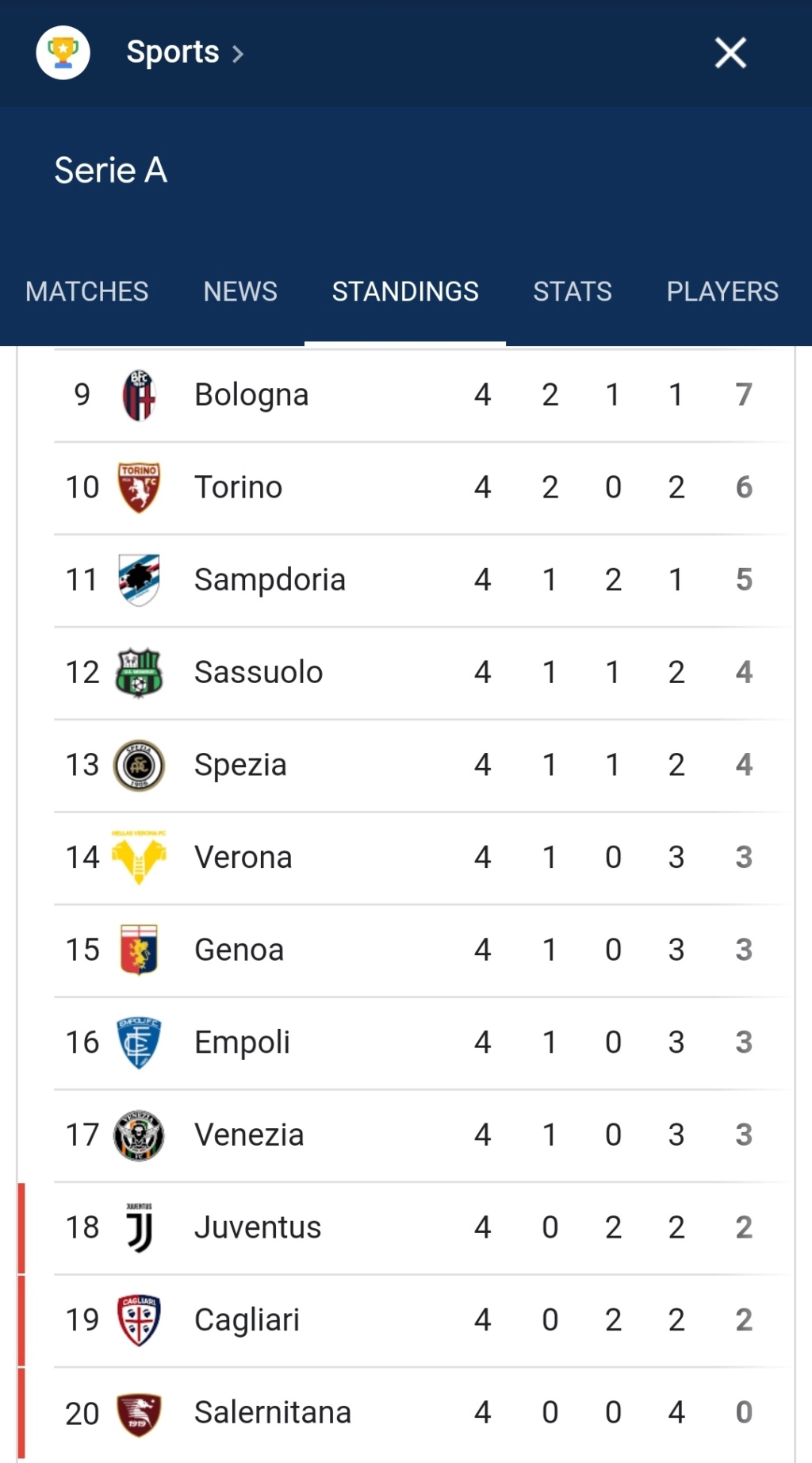 giroud pellegri messiah calabria if milan could them back it could get milan back in playing a bit better. never thought calabria could be this important at this stage of the season in big games. his progress has been enormous

Is Rebic the best big game player we've ever head?

he is more of a assist guy in big games than goals... i cant say because he hasnt done that yet against inter as far as i remember

He scored in his first derby, that derby where Milan were winning 0-2 on first half
Then it ended 4-2 for Inter

Kalulu really could have won us the game sigh...

Annoying to drop points against scrubs in the relegation zone.

couple years on from Juve's big revamp, changing their badge, signing Ronaldo to make that final push for the CL

and now they're here...behind the likes of Empoli and Spezia a month into the season

you love to see it

I think it's possible that Inter actually upgraded on Hakimi with their EXTREMELY CHEAP signing of Dumfries. As a fullback, I think he is better defensively, and has better crosses.

He may not carry the ball as well as Hakimi, and may not be as much of a goal threat, but his overall play is superior in my view.

With that, I think the only major quality drop for Inter is losing Lukaku, but Dzeko is no scrub despite his age (one player that I always wanted to play for Milan, way before he went to Man City).

It's frankly a testament to Inter's directors that they managed to get as much profit without a major weakening of the squad. They are the clear favorites for the title this year, especially with Juve dropping off and Milan having a thin squad with and injured bench.

dumfries pretty impressive. and how inter were able to broker the deal below 20m is beyond me. i understand that marotta is very respected manager, but ausilio is one smart technical director. he was pivotal in bringing skriniar, de vrij, bastoni, brozovic. i mean he and his scouts has incredibly good eyes.

also in terms of financial progress also apart from raising over 150m this summer, financially, they have brought some very good sponsors and also the fan token system (all sold) out, and their sponsorship deal has been improved with the lenovo, digitalbits, zytara media ties, and socios.
inter are due 250m plus interest in 3 years but i have to say its more than better feat they have pulled. the impossible... while staying competitive. over 150m already saved plus salary. its crazy. now its upto owner because inter has come out from impossible scenario

my hope is that come october when major election gets held, whoever wins, that new stadium plans get approved. sala has so far been finally a bit positive about stadium plans while the new candidates are pro stadium people but like many says i wont believe until its signed and sealed. it will massively improve both inter and milan in terms of in house revenues

I don't know you are serious

Hakimi >>>> Dumfries on every aspect

I think we'll need more than a decent halftime to declare Dumfries better than Hakimi, but a very nice game nonetheless.

who in the Fiorentina team is ex Inter?

Hakimi >>>> Dumfries on every aspect

I disagree about Hakimi being significantly better. Sure, he is better, and significantly so in some aspects. However, I think he makes better crosses, and is better defensively than Hakimi. Both are fast and carry the ball well, with Hakimi being better at it.

Main point is, Dumfries + the 40 million difference is better than Hakimi imo, and makes losing him less of an impact than losing Lukaku.

Fiorentina should have scored 2 already, now Inter woke up.

Page 18 of 29
Permissions in this forum:
You cannot reply to topics in this forum
Latest topics
» Donnarumma makes his fortune at PSG