Unfortunately, due to the hamstring injury he picked up against Napoli, Ramsey has played his final game for Arsenal.

It saddens me to say that the game against Napoli was my last game in an Arsenal shirt. Unfortunately it left me with an injury that rules me out of the remaining games. I am really disappointed not to play until the end and give everything for the club while I am still an Arsenal player. Unfortunately it’s out of my hands but I wanted to say thank you to the fans for your support. It has been a journey, on and off the field, and so much has happened in 11 years. I was a spotty young kid coming in and I’m leaving a man, married, father of three boys and full of pride and good memories that I will treasure. It will be emotional this weekend - my last game at home. I Look forward to seeing you there and thank you all again from the bottom of my heart for everything #arsenal #lastgame

I'm especially sad to see Ramsey go because he joined Arsenal at a time when I was coming into my own as a supporter. He's one of the first young players I saw debut and I remember how excited I was when he got a run in the first team. He looked like a world beater in the making.

10 years later, and it hasn't quite worked out that. There's still time, of course. I'm sure he'll be a success at Juventus and he can show what a big game player he is in the latter stages of the Champions League.

I'll admit, I've been frustrated with his performance and injuries many times, but I have a lot of respect for how he's conducted himself since announcing his departure and the performances he's put in since.

Respect to the man, gunner through and through. Lots of memories, I cant forget that season 2013, truly worldclass that year.

Best Arsenal related moment of last 10 or so years 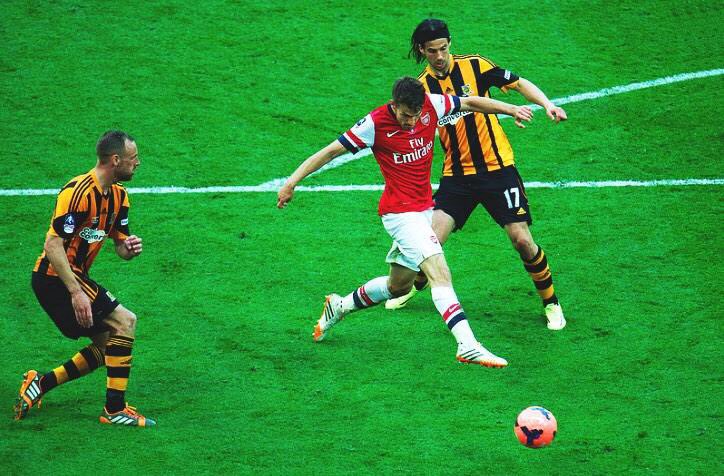 For 11 years of service, for 369 appearances, for 64 goals, for 62 assists, for those Wembley winners, for coming back from that injury to achieve what you have with us, for EVERYTHING you’ve given to this club, we just want to say…

I still remember the buzz when we signed him. Stole him from United basically. You could see it even at 17 what an incredible talent he was. The arrogance he used to play with and how he used to demand the ball from the likes of Fabregas, Nasri, Van Persie etc. We all knew he was destined to be a special player. And he became just that.

We basically watched him grow up at Arsenal. He was everything people wanted Wilshere to be. Maybe that's what ended up being the difference between them. His mentality was unbelievable and still is. I mean this season says it all. His goal against Portsmouth when he was just breaking through. His horrific leg injury and how he came back from it. We saw it all and it really does feel terrible that he is leaving. But i am glad it's on good terms.

I still maintain he is one of his kind out there. His best ability is how he always wants to be involved even if he isn't having a great match. He wants to defend, build play, attack and score. We are losing a special player and i don't think we will be able to replace him either.

He will always be remembered for Wembley and for ending our trophy drought. And then he did it again. That really does make him an Arsenal great.

I understand why he wants to go to Juve and i hope he wins trophies he deserves there. Hope we see him at the club again in some capacity.

Even though the ground was half-empty after the game, I think the reception he got and the "only one Aaron Ramsey chants" solidified him as a club legend.

), who was also honoured yesterday, which pretty much confirms he's off, too.

It was a very low key send off for Wele. Bit of a shame since he did provide some clutch moments in his career.

I think Emery would have used him A LOT if he was fit.

Ramsey has been my favourite player for a long time now and it's heartbreaking to see him go. He's an Arsenal legend in my eyes for what he's done here during a pretty frustrating decade for us. He always puts in a shift, is a big game player and puts his heart on his sleeve. It's a disgrace that we let him go for me.

Welbz can be replaced by Nelson who will hopefully be fit more often and Cech could potentially be replaced internally too (hard to say with keepers) but replacing what Ramsey brought will be a tough task.

I asked why Arsenal wanna sell him when I first read it a few months back, I thought hes a very good player for Arsenal as well and its not like hes out of favour by Emery, so why? Especially reading above all the fans love him too?

^He always wanted to move abroad at some point,so this was his chance

Aaron Ramsey | All Goals and Assists for Arsenal from k.a.18/19 on Vimeo.

Today at 3:19 pm by BarrileteCosmico