Have you guys heard of this new league?

I dont really get it, is this a replacement for the qualifiers? For the Euros?

I don't get it either, that is why I asked if anyone knew more about it.

UEFA wrote:In each league, four group winners are promoted (or play in the Finals, see below) and four teams are relegated for the next competition to be played in 2020

In addition, the UEFA Nations League will provide teams with another chance to qualify for the UEFA EURO final tournament, with four sides qualifying through play-off matches which take place in March 2020 (see below). 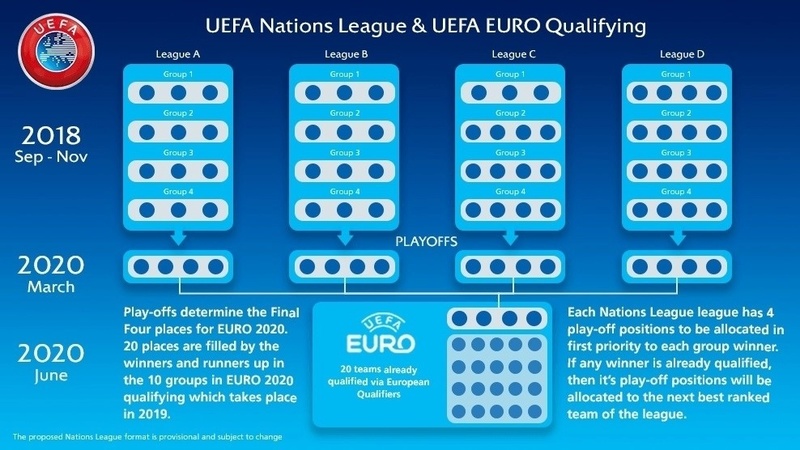 I found this explanation in Wikipedia. Sounds like a lot of games to be played in a short amount of time! It basically is the equivalent to South America's nations cup.

The UEFA Nations League[1] is an international association football competition, to be contested by the senior men's national teams of the member associations of UEFA, the sport's European governing body. The first tournament is due to commence in September 2018, after the 2018 FIFA World Cup, and the winner will be decided in June 2019. The competition will largely replace international friendly matches currently played on the FIFA International Match Calendar.

Adoption[edit]
In October 2013, Norwegian Football Association President Yngve Hallén confirmed that talks had been held to create a third full national-team international tournament for UEFA members but warned that it was only at the design stage.[3]

The concept of the UEFA Nations League would see all 55 of UEFA's members associations' national teams divided into a series of groups based upon a ranking formulated using their recent results, where they would be promoted and relegated to other groups according to their results within the group.[4] The proposed tournament would take place on dates on the International match calendar that are currently allocated for international friendlies and would not affect the FIFA World Cup or UEFA European Championship.[5]

In March 2014, UEFA general secretary Gianni Infantino stated that one of the benefits of the proposal would be to help less glamorous national associations arrange games.[5] The Football Association's chairman Greg Dyke said that the proposal is "very attractive", as England would be expected to play against top-ranking national teams.[5] Royal Belgian Football Association's general secretary Steve Martens said that lower-ranked nations would still benefit financially from the competition, as the television contract with UEFA would be centralised.[6]

The UEFA Nations League was unanimously adopted by the 54 UEFA member associations (Kosovo was not a member at this time) at the XXXVIII Ordinary UEFA Congress in Astana on 27 March 2014.[1]

The format was criticized for allegedly allowing teams not good enough to qualify through the regular qualifiers to make it to the EURO finals.[12] Also, teams already eliminated from the World Cup qualifiers would benefit from losing games on purpose, in order to drop to a lower league and improve their chances of qualifying through the Nations League playoffs.[13]

Reading a little about it, it is supposed to replace friendlies between UEFA teams. I guess playing all those games there will not be time for friendlies anyway.

I have struggles to understand UEFA's logic. The idea behind Nations League is interesting yet far too complex in its application.

UEFA wants to scrap the elitist Euros every 4 years system. Why they don't assume their real intentions, just for once ?

League with relegations give them much more money at the end of the day. Fans will also appreciate because now every game matters, even Gibraltar vs Luxembourg. In fact, my complaint is: i wish they go all-in for this. Go even further.

Create a formal competition based on Serie A/Serie B format and give a trophy to the winner each year, one for every division. Euro 2020 would then become the parallel of Coppa Italia. I'm a simple man and therefore i prefer clear, simple procedures... even more so when it concerns my hobbies like football.

What you described is what is happening. The Euro's aren't being replaced, they will happen every 4 years, after nations league season.

Its replacing the friendlies to make a league, resulting in a similar domestic league+cup format.

From UEFA's website, the leagues will be defined by the team coefficient initially, and then through promotion and relegation as it goes on.

If it were to start today:

Either you got me wrong Rincon... or the explanations on UEFA website are so complicated that i couldn't even locate my own opinion while reading them

"The UEFA Nations League will also be linked with UEFA Euro qualifying, providing teams another chance to qualify for the UEFA Euro finals tournament.[9][10][11]"

Right now it's only to patching the holes for the 4-year span between the big Euros. I want it standardized: a proper league + a proper cup together would be the real Nations League in my opinion.

In other words, scrap the current Euros + qualifiying system. The 16 teams Euros was an old scheme but the 24 teams Euros is a born-dead project in terms of credibility.

They say games (group play) are just in Sept., Oct, and Nov and then June (finals) in place of intl friendlies and it's over a two year period. Means teams like Spain, France, Germany play meaningful games (& additional television revenue) with less travel in getting ready for Euros or WC. In addition the lessor countries get winnable opponents plus more TV revenue than they do now.

Sounds in principle, ok, but I still think it's a lot of games compacted into a short amount of time. I'd want to see an overall schedule (together with normal club time slots) before making any reasonable judgement.

Futbol_bill isn't it the same than it is right now ?

There is always 2-3 international breaks in those months, enough time to play 6 games.

I guess I don't understand what you mean.

Each division (A thourgh D) has 4 teams that relegate and 4 teams for promotion for the next season. Except the top league of course which has no promotion, just a winner of the whole thing. (like in regular leagues)

The winners of each division qualify for the euro directly.

The rest of the teams have to qualify "normally".

So you have the season with the 4 leagues and the winner of each division that get rewarded with direct qualification to the euros + promotion to the next league when applicable.

I like it because anything is better than friendlies. Also you get meaningful matches that are not Germany-Lichtstenstein but Germany-Spain and Azerbaijan-Lichtstenstein so its closer in level.

@bill Warrior is right, they are just replacing the existing friendlies.

Then, would the competition take place during the Euro year too. The finals would then take place in June shortly before the Euros begin. Sounds crazy to me.

Its not happening every year, or during euro years. Its happening on odd years.

But some of those friendlies or Intl breaks are qualifying for either Euro or WC. In the case of A group, you have four groups of three, which means 4 games for each nation. Are you saying there normally are 4 friendlies in the three months (Sep, Oct & Nov). and what about the qualifying games, are they on at same time?

But Rincon, there are qualifying games, every year, next Sept the games for qualifying for Euro 2019 begin!

Regular championships
Serie A to Serie E: 11 teams each
Each teams play 10 games between September and June, a trophy is awarded to the leader.
All separate championships, with separate trophies. Top 3/Bottom 3 gets promoted/relegated.

Euro Cup
Like i said, the equivalent of Coppa Italia.
A one match knock out tournament between the 32 best teams, so 5 more games max

To me it makes more sense. I don't ask you to agree, but i hope it's clearer now.

futbol_bill wrote:But Rincon, there are qualifying games, every year, next Sept the games for qualifying for Euro 2019 begin!

@Warrior I understand what you mean now

Ok, I get it now (finally!). The real losers are the South American nations as they won't have Europe teams to play, except in real competitions. No wonder they invited France, Spain, Germany to their tournament!

futbol_bill wrote:Ok, I get it now (finally!). The real losers are the South American nations as they won't have Europe teams to play, except in real competitions. No wonder they invited France, Spain, Germany to their tournament!

I think they only invited "latin" countries:

"France, Italy, Spain and Portugal are set to be invited to play at the 2019 Copa America in Brazil."

Page 1 of 2
Permissions in this forum:
You cannot reply to topics in this forum
Latest topics
» Harry Kane Appreciation Thread A.K.A Soldado's Death Sentence