Now that I've slept on it as well, why the hell not ffs let's go and get him. We don't have much to lose.

Is zelalem in our plans

EL Patron wrote:Arsene hasn't made any attempt to sign Lacazette because he knows Aulas will hold out for at least 40 mill which is a ridiculous price for him to be honest. If Vardy flops, we will be stuck with Giroud, Vardy and Wellbeck so no space for an upgrade

So 40m is a ridiculous price for a 25 year old striker who averages 20+ league goals and can play in multiple positions, yet 20m for 29 year old one season wonder Vardy who stumbled upon a perfect storm season after playing lower divisions all his career is a steal?
And 50m for Morata who averages 4 goals or something..

Why not get Christian Fuchs as Gibbs replacement while you're at it? I'm sure he will be cheaper than RicRod.

The club only pays that sort of fee for players who are world class or players who will take the club to another level. Lacazette is a good striker but he is not even the best one in his league or in his national team. Also Ligue un is not as strong as it used to be so stat padding against likes of Guingamp doesn't really mean much. Good striker but not a player who is worth that sort of money.


guess we will find out this season

Ranieiri has told Italian press that the Vardy stuff is real, in case there was any doubt still.

Reports now from Leicester Mercury that Arsenal want the deal done in the next 24 hours, as Vardy will be leaving with the England team for France on Monday.

Could well be the fastest deal Arsenal have ever done.

This is still hard to believe.

There are some clear reasons why this signing makes sense, and numerous red flags as to why it could be a disaster. Almost definitely, Vardy will neither be messiah nor total flop, but rather somewhere in between, and it will be up to observers to gauge whether his contribution justifies the fee + contract and by extension, presumably, the decision not to go all out on e.g. Lukaku or Morata.

(If Arsenal had oil billionaire money, I don't think people would be so upset about 20m for Vardy because there'd be a reasonable expectation that more money would be laid out for another attacking player. But with Wenger & Arsenal, cash-rich as the club is, there's no guarantee for such transfer market "insurance," so I think that's why it feels crazy.)

I'm not totally sold on the idea but I'm going to try to be optimistic, and I am, at least, entertained. Wenger is thinking outside his box for this one.

@Hans Not saying it wasn't sensational or improbable. Of course it was. And, again, mixed feelings over here. I think he could very well fail to get anywhere near the clutch and clinical racist/drunk we all fell in love with and saw crowned our player of the year last season.

BUT, some players are late bloomers. It's been mentioned 400 times now but Ian Wright was. And I'm curious as to what Wenger has up his sleeve if he's, as Jay said, going for fighters and, not just that, Vardy would probably see us play more fast-paced, counter-attacking football.

Jay29 wrote:Ranieiri has told Italian press that the Vardy stuff is real, in case there was any doubt still.

Reports now from Leicester Mercury that Arsenal want the deal done in the next 24 hours, as Vardy will be leaving with the England team for France on Monday.

Could well be the fastest deal Arsenal have ever done.

Vardy knows this is his last chance to join an elite club. Wants 4 year contract worth over £100kpw. Arsenal want it done by tomorrow because Hodgson doesn't want England players involved with transfers during the Euros.

Even if he doesn't get done before then, he'll have Wilshere in his ear all summer

Have a good feeling we'll get it done in the next few days. 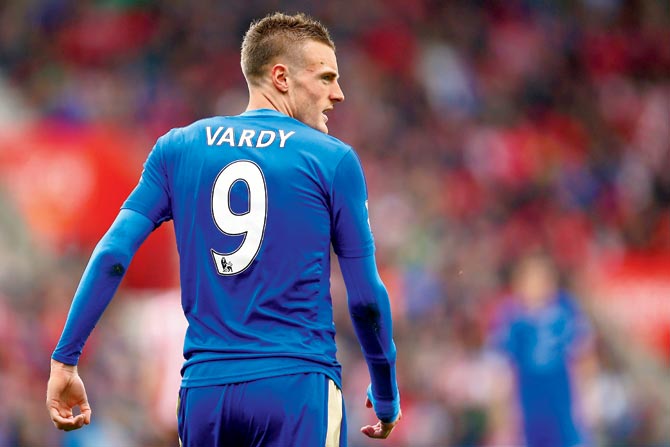 Knowing Arsenal, even if a deal is completed this weekend they'll delay the announcement until after the Euros.

We'll see if it gets done as quick as the papers are suggesting, though. Can't help but feel there'll be a complication somewhere.

Rebekah Vardy (wife) pretty much all but confirmed that they're in London on Twitter and that LCFC fans shouldn't give her abuse because she doesn't call the sh0ts when it comes to her husband's career.

Reports in Italy suggesting the fee will be £29mil, not the £20mil being reported in the English press.

Not that money really matters.

Could become only the fourth player in our history to cost over £20mil.

For Vardy or Koulibaly?

eventhough he is a WC player

RealGunner wrote:
29m for Vardy is a pls go

eventhough he is a WC player

Apparently there are some bonuses involved that could bump it up to £29mil.

but Vardy is like a clinical Welbeck so i am ok

would be well worth it when he Delivers the League Title