@rincon wrote:The official statement from Finninvest in Gazzetta (and S posted it in the general section) has details saying that the agreement includes 350 mill investment within the next 3 years.

With the signing of the agreement 15mill are paid, with 85mill due in 35 days.

Its all a bit technical so some details in timing might be off, but thats the gist of it.

There is hope for you Milan bros

I suppose the most pressing question is, given that the finalisation of this first payment falls outside the transfer window, what implications are there for the organisation and financing of the market under our new ownership.

Only time will tell. Can't wait for the rumours Gazzetta will cook up tomorrow about how we're going to wast...I mean spend this cash.

The lulz when Sosa was actually Montella's dream signing all along.

Anyways, i'm still skeptical of the deal, this could all turn out to be nothing

-The consortium headed by SOnny Wu imploded internally 10 days ago(dunno what that entails), its the group that has been negotiating with B
-A majority of the group broke away from the consortium and formed their own.
-Gancnikoff and Galatioto are NOT involved with this current 'rogue' group
-The terms are exactly like the one from the previous group, everything is the same, only the entities involved are different
-This group also has backing from the Chinese state

Obviously we dont know the details, hopefully light is shed on this in the coming days. Still very skeptical

-Apparently Han Li was part of the group under Sonny Wu, but three weeks ago the business team broke down over internal disagreements.

I owe you an apology as well, sorry for acting like a douche and sounding condescending

Soo no more loan with option to buy ..

So it happened. Guess no more boycotting the club.

No worries ES, never took it personally! Cheers for the apology.

Marco Fassone will be the new director general of Milan, having previously worked with Juventus, Napoli and Inter.

Strong Inter face, no thanks.

Contact between Fassone and Ausilio today for the sporting director role - Ausilio says 'No'. [@FabrizioRomano]

I wouldn't mind going for Sabatini, doesn't his contract expire next summer?

The Chinese want to form the new Milan management by the end of September. Fassone started talks for the new sporting director [Sky].

It looks like its final. Your Chinese overlords paid and made declarations.

“Today’s announcement represents a milestone in the process that will lead to us writing a new and glorious chapter in the life of this incredible team,” Li Yonghong said.

“For many generations of fans, Silvio Berlusconi’s Milan embodied the very idea of winning and success.

“Our goal is to return this legendary team to the level of the best clubs in the world.”

Let's hope things go better for Milan with a Chinese owner than it has for Valencia so far...

The 5 candidates of Galliani's successor: 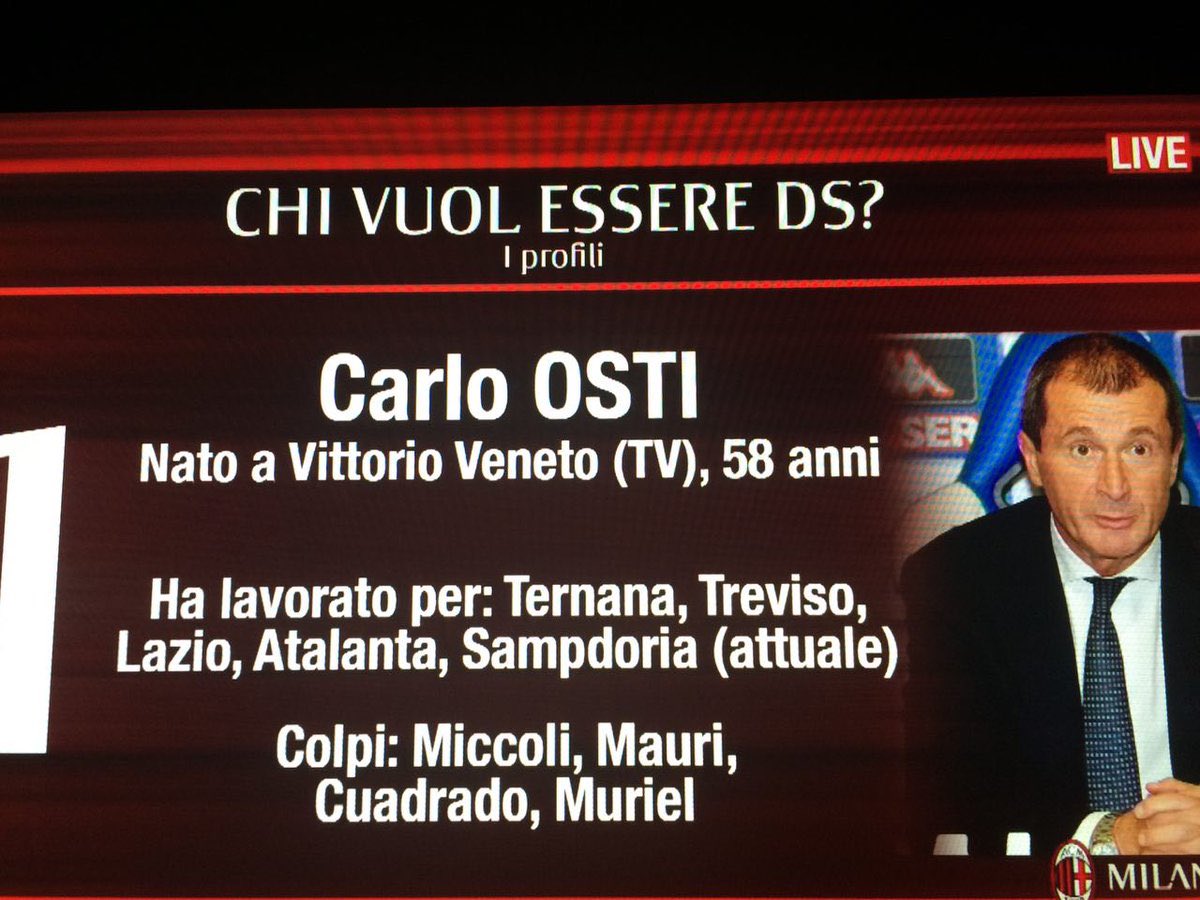 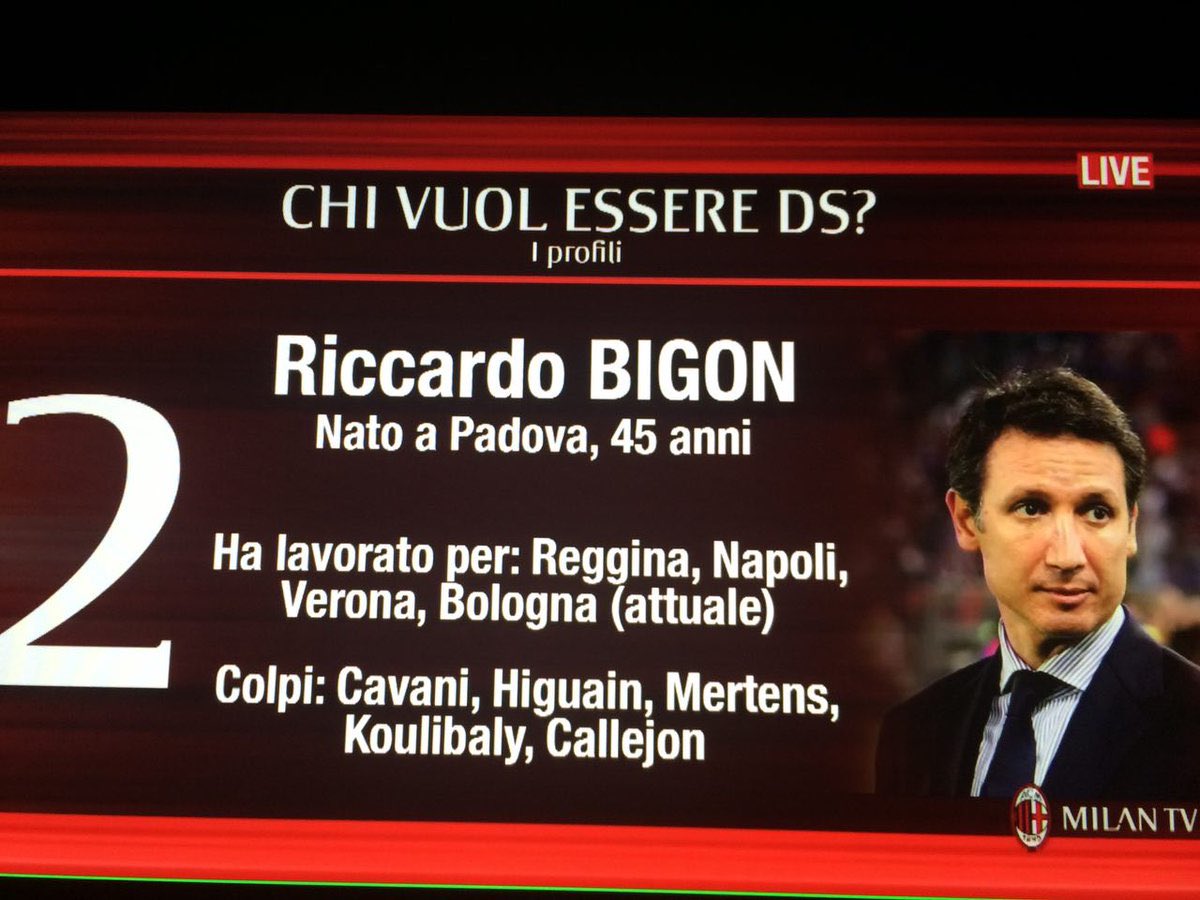 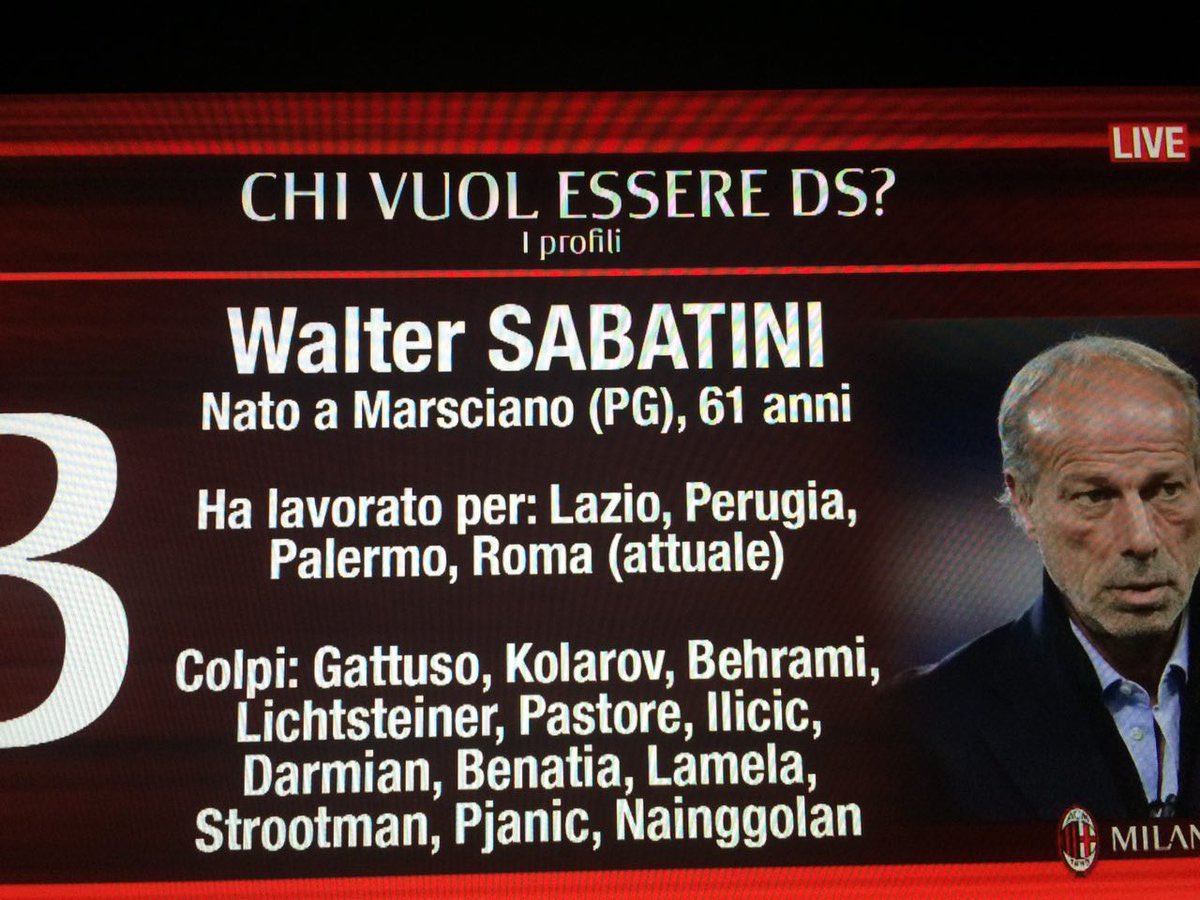 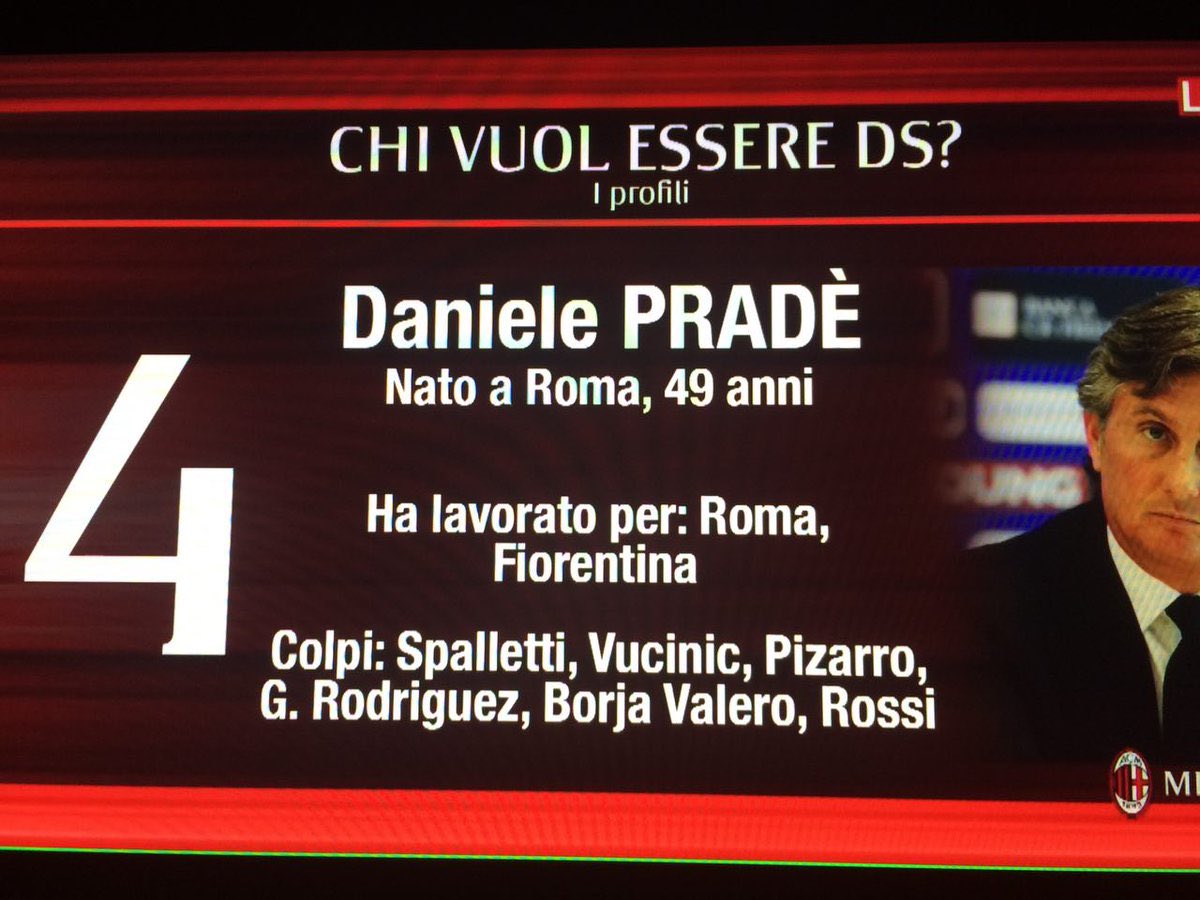 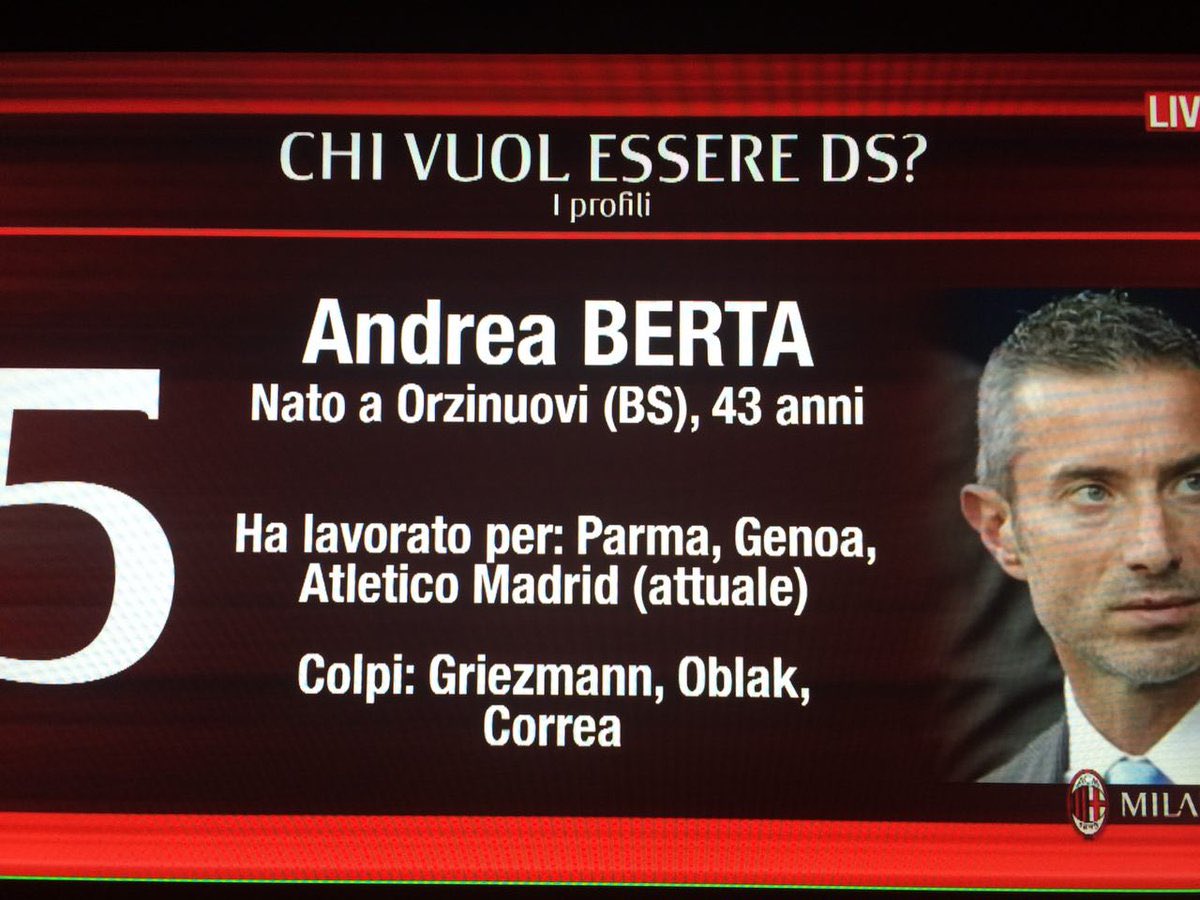 Massimiliano Mirabelli will be the new sporting director of Milan. [La Repubblica]

Now Mirabelli has to solve his technical and contractual relationship with Inter [Sky].

Maybe @Robes knows more about his involvement in transfers? First time i hear of this guy

BREAKING: Massimiliano Mirabelli will be Milan's new sporting director. Inter have given their consent [Sky Italia].

So what happened to the 5 candidates then?

I'm guessing none were chosen

So why were they the candidates then? Or rather, why wasn't the guy eventually chosen listed as a candidate? 'The 6 candidates to succeed Galliani'?
Surely you would regard the guy chosen to have been a candidate before being chosen?

I have no idea, the official Milan channel sent those pics, its retarded, but we are used to retarded now