The eras can't be compared simply because we are hell alot richer than we were in 2008. Calderon brought shit players into the club. Now we have players like isco and James on bench, unthinkable back in the day.

Does it look like CR is currently integral part of current team? I honestly don't think so. May be last season, this season no way. He has been third best in the front three itself.

Yet he was the one who got us to the quarter finals through his individual brilliance while Benzema and Bale were watching from the stands, both injured
_________________ 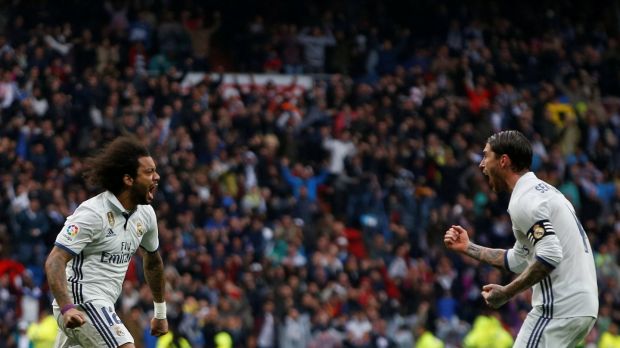 Obviously when Nick mentioned Kroos, he actually meant the merits of Ronaldo

Surprise surprise, an AM/CM isn't excelling at being a DM. There's no need to sell him, just use him in his actual position.

@chad4401 wrote:yeah right better with him how? we get to hype about having 1 of the 2 best players in the world? what else? golden boots?stats?

rm won things before him and will win after him, just because he has a mob of fanboys, doesn't makes him immune to being called out, another season another meaningless 50 goals, yay for golden boots.

i did not say that we will not win anything after him. You asked us to compare both era and i said now is better sporting wise because we are playing CL semis every year and we compete at least.

about to go another rant again? please go in another thread, i created this one to discuss a potential Kroos move out of Madrid.

Whoever is the mod watching this thread, could you please not let these people hijack the thread?

the point is the team is still gonna with things with or without cr, and what fen said is a typical fanboy rants.

You're all talk and 2nd grade grammar. First posts you make when you come back is how much Ronaldo hasn't helped us and he's always been trash, etc while defending you're fiancée Karim.

Yeah, we were so much better pre-CR. SO MUCH better. We were winning the league and making the CL finals every ye-- oh wait, no we were trash. Like laughably bad. I'm guessing you became a Real Madrid fan when you're boyfriend joined this team. No worries, I understand.

Obviously we aren't that great still. But I'm gonna go on a limb and say we make so many excuses for players like bale, James, Benzema, etc.

Oh, he's having a poor patch.
Oh, you know what, it just wasn't his day.
The personnel doesn't fit him.

Soon as Ronaldo has a bad run in form, all hell breaks loose, he's destroying our team, doesn't do shit.

If you can't see the hypocrisy, you're deluded.

And there are lot of members who know what I am saying is true.

Bale and Benzema have been crucified for doing what Ronaldo is doing now. The only thing saving Ronaldo at the moment is his goals. Apart from that he had been good in spurts. Both Bale and Benz have been excellent this season but i dont see anyone praising them in fact rumours of buying a CF to replace Benz is rife. Just when he actually gives us a full season of consistently good performances

guys please stop baiting Chad, i dont want to read another page of his nonsense. he already moved on. come on, thanks
_________________
Madridista naci.. Vikingo sere y Merengue Moriré

Back to subject on hand, I feel that Kroos and James will be gone and possibly Isco as well. That leaves Modric with Kovacic and Casemiro, supposedly retained for backup roles. I'm also assuming Asensio will be brought back from loan if Isco goes (in addition to James). That (Asensio or Isco) means being the third backup. That means we will look to sign two midfielders.

I really don't see any changes in defense, despite the latest french threatened departure theorized by Sports, other than a second left lateral.

Up front, i believe Ronaldo will go for a few reasons;
1. He is +30 and deterorization is evident.
2. End of a era, this team led by him hasn't produced expected results and a major revamping is necessary.
3. This summer likely is last market available for us for three years, so club needs to restock for next three years. 30 + doesn't cut it.
4. There is still a good market for a Ronaldo sale.

So that opens up a position for a new star player, hopefully someone with goal scoring ability, but with a better team mindset.

I also feel Benz is likely gone, probably unfairly so, but he is a big part of the era that hasn't produced. As a result a new striker is a probability. Plus, based on last night's play with seleccion, I definitely feel Morata is coming back (in addition to the new striker).

And speaking of last night's game, De Gea definitely showed he is elite. Despite this forum's love affair with Navas, he being 30+, will be replaced by the younger De Gea.

Only thing that has deteriorated is your brain from all that aging Bill.

There is no replacement for CR in the market. He's the best player in the world in his position. In NO WAY, I repeat, NO WAY is Madrid going to sell their best player.

@guest7 wrote:Only thing that has deteriorated is your brain from all that aging Bill.

There is no replacement for CR in the market. He's the best player in the world in his position. In NO WAY, I repeat, NO WAY is Madrid going to sell their best player.

Come on man, you're talking to the ultimate football hipsters. Everything they say has to stray from the norm regardless

Page 3 of 3
Permissions in this forum:
You cannot reply to topics in this forum
Latest topics
» Most dominant clubs in international stage