So praising Pep for Barca success when he was playing Messi, Iniesta, Xavi, Villa, Mascherano is like praising fielding 11 players on the pitch?

What a *bleep* tool you are kiddo

Okay if you're going to act important and cut through a conversation you're not apart of, atleast relax, breathe and then re-read what you've wrote instead of typing with hate and just making yourself look like a clown.

According to Echo 'Pundits', we will field a full-strength team with only enforced changes for Lucas (Allen/Lovren), Ibe (Markovic) and Raheem (Lallana).

Wait, What?
Sterling is out for this one as well?

Nishy wrote:Wait, What?
Sterling is out for this one as well?

Yes he is injured.

Don't like the idea of stretching Henderson & Coutinho like this. They have already started to look jaded.

HEIL MEIN REDS wrote:I always thought it is the manager who selects the team and makes changes in formation


mate you cant do cherry picking for making your argument. He deserves the credit for what he achieved in the last season. Sturridge was his buy and he decided that they need to play in a diamond formation, may be it can be also Pascoe but who cares because it is his staff. I know you are mad that after doing everything right in the last season (position in the table wise), it seems like we are back to square one but yesterday Stephen Hawking said (in the movie)

"The victim should have the right to end his life, if he wants. But I think it would be a great mistake. However bad life may seem, there is always something you can do, and succeed at. While there's life, there is hope."

So chill and have some hope, may be we can still get something out of this season. 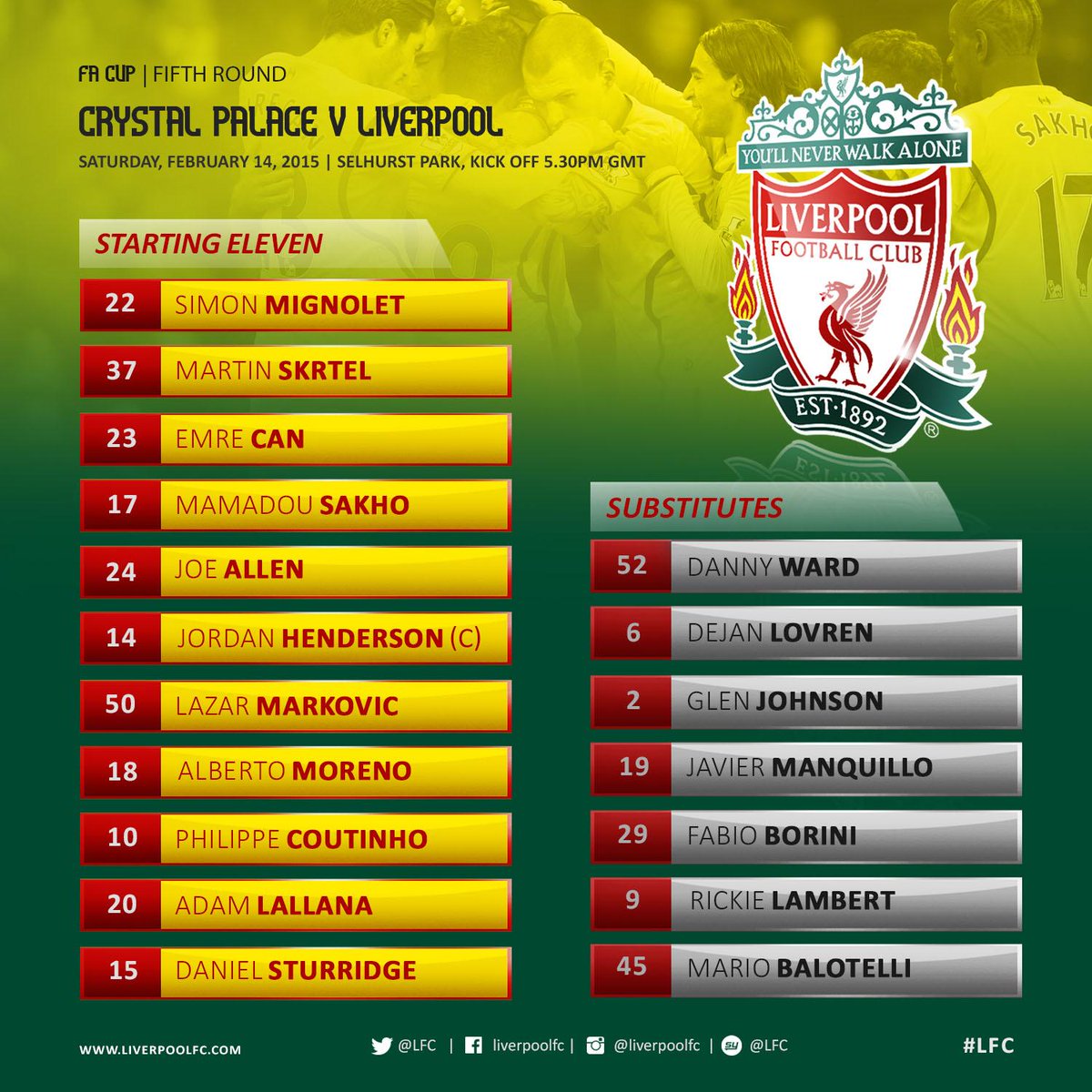 Note the absolute lack of midfielders on the bench.

what is he doing !!
If we dont win against Southampton and if we fail to advance in Europa League, I am going to join RA with his bandwagon

That's the strongest line-up we could have in this game. I don't like this zero rotation policy during a schedule like this, but at least we should have a great chance of winning this match!

exactly, we look so weak mentally despite starting such a strong line up...I hope we dont play like cowards for the rest of the time now

Should have had a pen, effing bastard ref.

And Lallana should've scored his chance. Man Palace are playing on the break, and defending well at otehr times. I can't see us creating too much. Wouldn't mind a draw and a replay at Anfield. As long as we don't get knocked out tonight.

That was actually a pretty good half from us, just couldn't score and conceded once. Speroni saved superbly from Lallana.

Why do we not use the left flank almost at all? Moreno has probably had like three touches.

Anyway, if the second-half is like the first, I believe we'll still win this one, at least draw.

Btw, Gayle is such an actor, first dives to get Henderson booked and in the end there acted like his ankle had been broken in pieces when there was barely any contact.

we need some more movement inside the box, like the Henderson's run into little pocket inside the box. We need to get it done today, no need of replay please. If we play like that we can surely score. Lets see what subs we use today

Yeah we aren't getting Moreno invovled at all. It's all right wing.

I don't mind moving Can to midfield and brinigng on Lovren for Allen.

And Mario at 60 minutes for Lallana or something.

yeah Can to midfield and Balo can be introduced !!

We need to improve, that's all. All the players look either rusted or clueless. Yes, we created the odd chances, but that's evidently not enough.

WE can do this ffs. I can feel it.

Well, that was a rather bad case of 'take the lead & start playing like shit' syndrome... But Palace didn't ask too many questions and through we go!

Yeah that was the best part of the match. I love Moreno. He seems like that goofball friend we all have.

We needed that confidence for the next few games and also I think we played good. I think Allen was also good, these are exactly the type of games where he thrives because they allowed us to have so much posession.
The way Balotelli kept smiling after every foul was amazing to see.

Similar topics
» WTF, POOL Vs Man U
» Pool vs Spurs
» Stoke vs. Pool
» Crystal Palace vs. Liverpool
» why is pool selling Meireless?

Page 2 of 3
Permissions in this forum:
You cannot reply to topics in this forum
Latest topics
» ¤¤ WORLD CUP 2022: The prediction challenge ¤¤