Liverpool FC has today announced nine new television partnerships, which will allow millions of fans across the globe to watch the most recent Reds games and enjoy access to exclusive content and behind-the-scenes footage from the club.

Working with Pitch International, the new TV partnerships will bring the club closer to the global Liverpool family, enabling fans to get more of an insight into the team they love.

The deals will also help to bolster the football credentials of the various TV platforms, allowing them to become true destinations of Barclays Premier League action in each region.

Matthew Baxter, chief media officer at Liverpool FC, said: "It's fantastic that the club has been able to secure the new host of TV partnerships, allowing passionate Reds to watch the heroes they love.

"One of the club's main aims is to extend engagement through our various media with the millions of fans across the world, so that they feel part of the Liverpool FC family, and these deals are another step in that direction."

The Star network covers HK, Indonesia, India and possibly ME too. I think it will be the networks that will benefit (from an enriched portfolio) most. Not that I'm complaining. However, fans will get some thing more. Just hope Sony doesn't use some scantly dressed lady who knows (and gives) shit about football & LFC.

Getting it right off the pitch, let's just get us CL.

This new partnership will see Dunkin' Brands enter the UK's top-flight football league and Reds fans will benefit from this relationship as Dunkin' look to expand their businesses into new territories.

Dunkin' Brands is the parent company for both Dunkin' Donuts and Baskin-Robbins and together they will bring fans closer to the club through innovative promotions and activity across the globe.

"We're delighted to be joining forces with Dunkin' Brands, one of the world's most iconic names. Dunkin' Donuts will be our official coffee, tea and bakery provider, and Baskin-Robbins will be our official ice cream provider - we welcome both to the LFC family," said Billy Hogan, chief commercial officer at Liverpool FC.

"Fans across the globe will benefit from this partnership as Dunkin' Brands look to expand their business in locations including the UK and Asia, bringing exciting partnership activation to new territories and ultimately helping to bring fans closer to the club no matter how far away from Anfield they live."

John Costello, president of global marketing and innovation for Dunkin' Brands, commented: "With 18 English league titles and five European Cups, Liverpool FC is one of the world's most renowned football clubs, so we're very excited to partner with them as we continue to grow our two winning brands, Dunkin' Donuts and Baskin-Robbins, around the world.

"We look forward to working with Liverpool FC on a number of exciting marketing initiatives and engaging with football fans worldwide in the coming years through this partnership."

Dunkin' Brands currently has more than 18,000 points of distribution in nearly 60 countries worldwide, including nearly 11,000 Dunkin' Donuts restaurants in 33 countries and more than 7,250 Baskin-Robbins shops in nearly 50 countries.

In 2013, Dunkin' Brands opened 790 new restaurants around the world, with 415 of these restaurants located outside the USA.

That would have been a terrible idea. The club would have ended up OWING money to Dunkin Donuts rather than receiving it, as Adam would have eaten the compensation's worth of donuts and then some.

It might have been a performance based thing, 1 Donut for a assist and 2 Donuts for 1 goal

Adam to help slowly pay back his transfer fee. 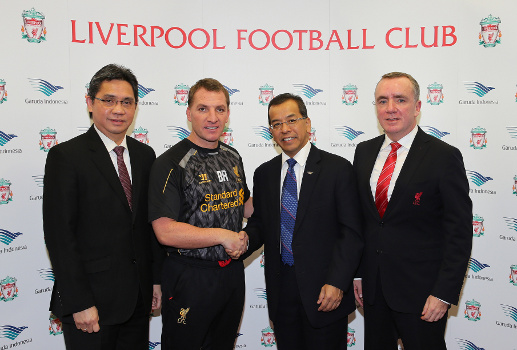 
You kidding me ffs

This was last year (2012-13), so none of the new commercial deals are accounted for. 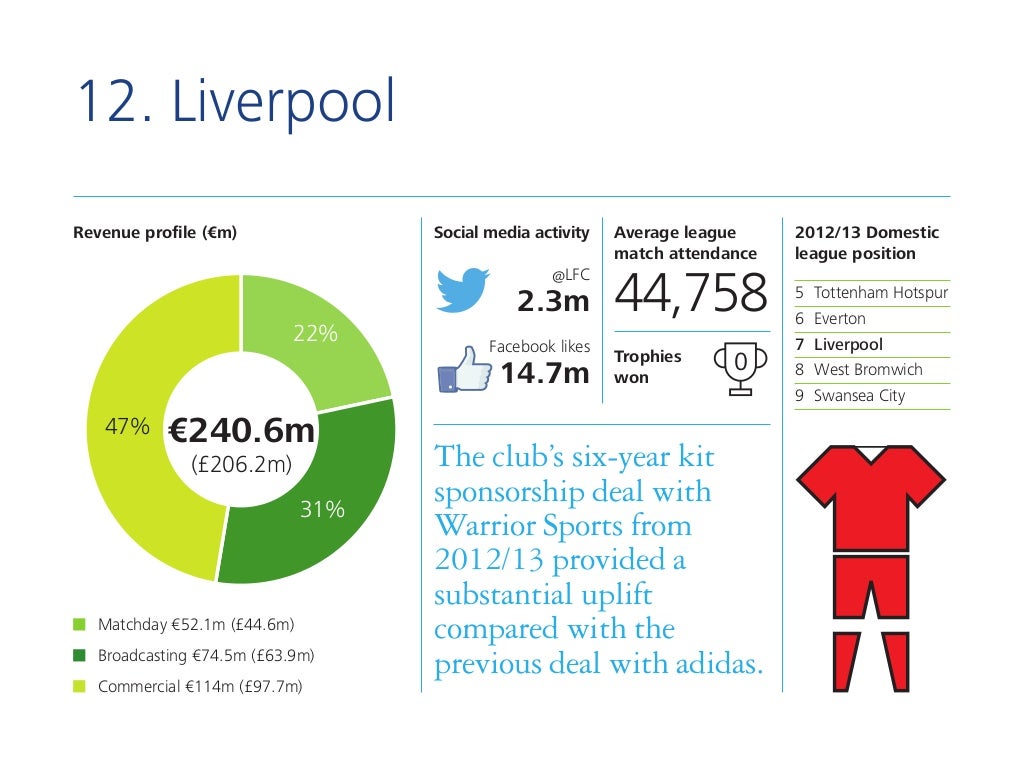 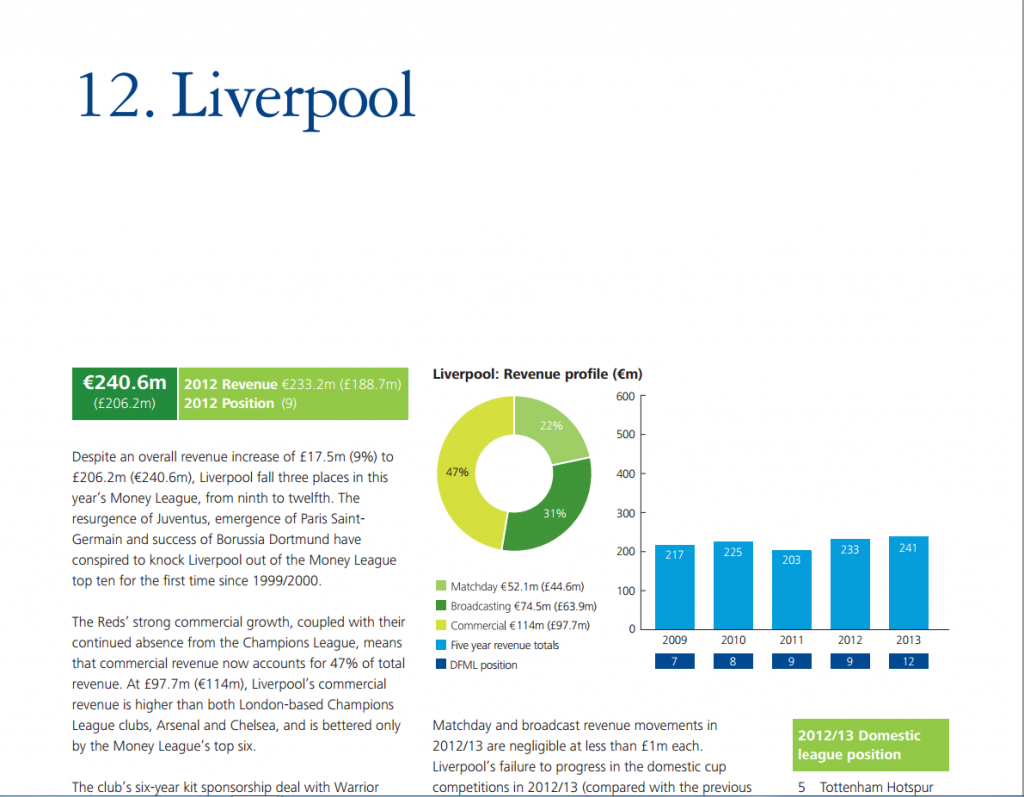 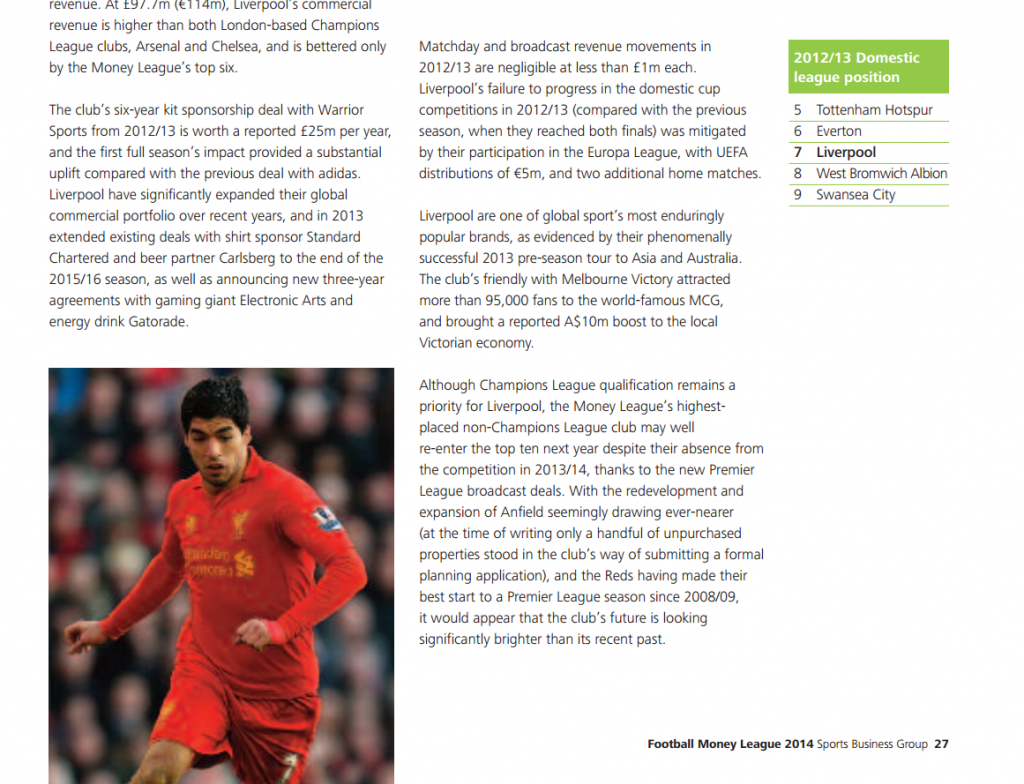 Remmeber the days we used to make fun of Arsenal for boasting on their balance sheet and commercial deals only, only buying young players and not caring about buying trophies ??!!

Top times...now we've become a worse version of them

When will be buy Özil

The Guardian's Andy Hunter reports that the new Garuda Indonesia deal at #LFC is worth £32m over 2 years.

There was a deal with Vauxhall a couple of days ago but the terms weren't made public. A host of other commercial deals made in 2013 including Gatorade, Carlsberg, EA Sports, Jack Wolfskin and a bunch of others.

Deloitte put us at £97.7m for the 2012/13 season in commercial revenue, now this is excluding the Vauxhall, Garuda, Donuts, and a host of others.

Broadcasting should improve significantly as well with the new 9 global tv deals.

FSG keeping the books very neat I must say. Looking mighty healthy for the future.

Let's not forget that 70m we'll get for Luis in the summer.

Red Alert wrote:Let's not forget that 70m we'll get for Luis in the summer.

Hopefully significantly more than 70m though

you people talking about our best Player like this

In light of your recent thread...

Remember the days when we were almost in administration? Those were great times. Being profitable sucks.

In light of your recent thread...

Remember the days when we were almost in administration?  Those were great times.  Being profitable sucks.

Page 1 of 2
Permissions in this forum:
You cannot reply to topics in this forum
Latest topics
» The Gospel of Gabriel Jesus according to Pep