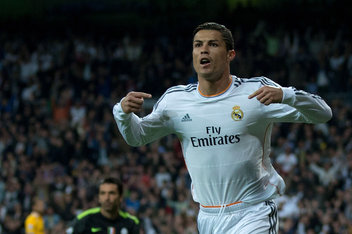 Cristiano Ronaldo has scored on his last 7 visits to the Camp Nou.

"It is difficult to prepare for this game, motivation and concentration are very large. The players are confident because the last match at the Camp Nou was a great game and so we look forward. The timing is good for us last week was good and we improved a lot in all aspects, we can do well. The idea we have is going to play and show our quality and our game. Do not know who is favorite. Everyone thinks Barcelona, ​​but this is not bad for us. "

Both teams aren't solid defensively, so I expect there to be goals from both sides. Against Juventus it was a victory, however overall it wasn't the best game. Juventus were the better side. As usual, we need to improve defensively. Possession play needs to improve and the overall system needs to be more clearly defined. Right now it's too random.

In terms of Barca, they're more pragmatic under Martino. They've played a deeper backline and countered recently, so this could turn out to be an end to end game.

2-2 is very generous to us imho. Barca will keep most of the ball so its important all our midfielders have a set task tomorrow. we can't just sit back and invite them to our half because messi is at his best when we do that

we need to press their cbs because thats where their posession starts, I'd rather mascherano hoofs it back to us than finding a pass to busquets or xavi or whoever

for this reason we should start morata. he presses alot better and will generally just occupy the cbs and bring fear into them
_________________

Apparently Ancelotti said he'll see in training and will decide whether to start Bale or not.

Hope this is a good match to watch from a neutral perspective, been waiting for this game a long time

I don't feel very confident considering the way we've been playing away from home in the league.

I don't want any "Make a player happy subs".

The lineup that Marca is reporting is complete

If Di Maria plays left of Modric then I love this lineup....it's something I've been hoping we try for quite a while.

I think we need the extra centre back to cover Marcelo and to make sure that Varane doesn't need to come up....that way he can control the game from the back rather than needing to leave the spots where he can see the game to cover for a break in midfield...which is going to happen.

For me, I would say isco and Morata instead of Bale and Di Maria, but it's the same thing really.

Morata isn't even on the bench.
Let's experiment a lineup in a very important game against Barcelona that could see up go level on points.

And you are content with that?
When was the last time we've seen Ramos in the mid...ever?

If it was Pepe, I'd still be upset, but I could see why Carlo would have put him there.

We have to win. No excuses after coming out with a lineup like that.

I don't think he's going to be a midfielder. Even if he's positioned slightly ahead of the other two...I think Varane is going to be behind and Pepe will and Ramos will find themselves in a more natural position somewhere between CB and DM.

Experimentation? I don't see what's wrong with making a change in an important game. Do we really have the type of winning formula that says we can't make a change?

I see the logic in the structure, I see him trying to accomplish a goal with the change...so yea..I'm happy. This isn't Mourinhio throwing people in and waiting on expecting miracles....it's thought out.

That logic about Mourinho throwing players out is flawed because if anything, that's what Ancelotti has been doing this whole season. And I'm not sure how you haven't noticed that.


Or how you forget to recognize that we haven't lost a Clasico in our 6 previous encounters. I doubt we would have accomplished that if Mou would experiment everytime.

For the whole month and a half? Ancelotti has a basic idea of what he wants to do and is trying people out, testing where they fit and where they don't. When that's sorted out - we'll see the dividends.

The last 6 don't matter, we sold key players, key players injured, we haven't played that way in a while. To try that now would be as much an experiment as this is.

They'll do the same things, high press middle press, fall back after lines are down then look to counter, but it's just a different structure...that distributes roles more evenly at the back and gives the front more freedom.
_________________

You type a lot without saying a lot.

This lineup that Carlo put out is practically inviting Barcelona to come play in out own half.

There is nothing good about this "experiment".

This *bleep* experiment ancelotti did was pointless and a waste. And he picked the best time to do so.

all those chances yet again in a clasico

@FalcaoPunch wrote:This lineup that Carlo put out is practically inviting Barcelona to come play in out own half.

There is nothing good about this "experiment".

He plays better when we are chasing the game, or any time he sees the ball more than once every 25 minutes really.

Carlo it seems wanted to lock it down in the first and push toward the end, and I think he timed it well, individual lapses from Khedira and Lopez were unlucky. Hitting the post was unlucky, not getting the penalty was unlucky.

I genuinely thought Ramos was going to be a centre back, in my mind 3 at the back is really a worthwhile experiment. But in the middle, he's a better passer than Khedira and that showed. Still, playing him as a floating DM with none to track was a mistake. The minute Messi veered right he should have slotted in behind Marcelo.

Yesterday at 11:46 pm by AlphaBeast

Yesterday at 7:48 pm by RealGunner

Yesterday at 7:28 pm by Hapless_Hans

Yesterday at 6:31 pm by danyjr