why would playing bale in the biggest rivalry match please perez? especially if you are saying he wasnt fit enough and hasn't had enough decent performances.

if carlo wanted to please perez bale would be playing against stomp-prone la liga sides, not barca away from home.

bale was played out of necessity and tactical experimentation. simple as that. no need for this perez conspiracy theory.

if you hear hoof beats think horse not zebra.

You reaaally think Perez cares about Bales fittness?? as for Carlo he probably took a gamble which didn't pay off.....he is trying to prove he is an independent coach and doesnt budge to presidential pressure but so far he isn't showing it honestly

the clasico is the world's most famous football game nothing would please Perez more than seeing Bale blast one in from 50 yards to show off his shiny new toy to the doubters. Other LaLiga teams aren't that appealing and wouldn't attract the same audience as this game would

I am not going to buy this "experiment" people keep talking about. He couldn't bench Ronaldo or DiMaria because they had played well this season but he could bench Benz and so he did. Anybody with any knowledge about football knows Bale does not compliment the other two and against these small laliga teams you are talking about he probably would have continued with Benz or played Morata who is Benz' back up not bale
_________________

how do you know bale can't complement ronaldo or di maria if you've never seen him in a formation like that?

getting pretty tired of posters making such prejudiced assumptions.

perez wants to see bale do well, not get embarrassed against our biggest rival.

the line up was carlo's call, if you don't buy into that then continue chasing these phantom motives.. you'll be doing it forever, and i won't accompany that trip, as no logical person would/should

because I have seen him play before joining us....... looking at three individually I am sure you can tell who will compliment who

when it comes to Perez buys I think selections are politically motivated. Everything else is the coaches choice because Perez couldn't give a fck about the others

for example persisting with an under performing Benz and only indirectly putting on Morata by subbing somebody else then benz and THEN put Morata as a cf to prevent a straight swap is to protect the reputation of Perez' boy. Playing with Bale after insisting he didn't need/want him in the summer and after he hasn't even had one good cameo over Jese or Morata who have both taken their minutes and really performed well in them is also to please the president

the function of the club, at his present time, is to buy 'investments'. its perez. nothing gets his rocks off more than seeing his latest galactico out there. why would perez be pleased? its barca like you said and its a big game. barca has their latest jewel on the field and the media *hit-storm that would've come of it would've been 100x worse than bale flopping.

the only experiment was to play ramos which was driven out of fear. bale was a forced move by el presidente from upon high. who experiments with a half fit player at the nou camp? its a battle field, you send ur wounded home - not let them fight.

haha i do appreciate the horse and zebra analogy. made me chuckle.

its a common phrase. occams razor.

learn something new each day. thanks vanDEEZ! (no sarcasm) What are ur thoughts on isco?

fantastic young talent but i think a lot of madrid fans expect him to be a CM when hes a CAM.

he hasnt been playing lately for this reason. Carlo doesn't need a 10 he needs a player like illarramendi

so until he adapts to a CM (which i think hes capable of because he is young) hes unfortunately only going to have bit parts unless modric gets injured.

I haven't seen Isco play like a CAM in a whole though.
He's amazing ( that chance against Sevilla was

)but not the kind of player to play that final ball.

Bale having his best game vs Sevilla so far

Bale totally MOTM against Sevilla...
The 3 goals conceded May have us worried, but Bale was frikken phenomenal. 2 goals, 2 assists. And (perhaps just as important) CR7 got a hat trick at the same time and they CAN play together...
_________________

I'm more proud at the fact that CR7 let two freekicks go to Bale and Ramos. 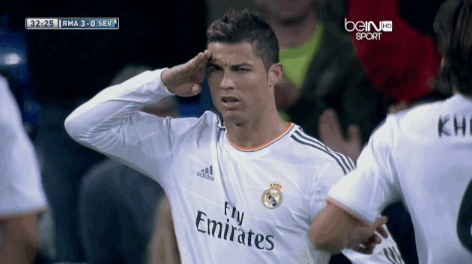 Definltey showing his form. A fine physical specimen but definitely needs to develop technically, link-up, and overall reading of the game. Anytime Madrid is not on the break or quick counter Bale seems very lost and his game and the motion of the team stales. Whenever he gets the ball and is being guarded needs to make a quick decision in his head to give up the ball and go instead of trying the 'Ronaldo' size up move. He is not Ronaldo, Messi, or Neymar in that regard so he needs to stop it.

Have yet to really see him take players on 1-on-1, but his link up play is good, particularly with Benzema. He is certainly racking up the stats chart with both goals and assists. Good finisher too.

There isn't as much space in La Liga compared to the EPL so you won't see him having too many successful 1vs1. He doesn't have the skills and technicality of a Ronaldo/Isco/Ozil in tight spaces but he does have the pace and strength of a Ronaldo to pull the "kick and chase" move he does but it's so easy to stop in La Liga due to tight spaces.

His right foot needs work... some of his shot attempts are even worse than Ronaldo's at time. Overall, he is adapting and will only get better but I don't ever see him taking players 1vs1... and if you watched him in the EPL he never really took players 1vs1. He accelerates and uses his pace to cut through the seams and makes it a race but like I said... not enough space in La Liga to do that.

may be not in last match, but quite a no. in few matches before it.

but definitely not a numbers ppl will miss out.

his link up is no good, not even with benzema.

Some of you guys act like bale is a donkey with no technical ability. I mean the guy isnt like isco or cr but he can control the ball well and ive seen him beat players on the 1v1 more then once. dont know what games yall are watching.

Giggity5313 wrote:Some of you guys act like bale is a donkey with no technical ability. I mean the guy isnt like isco or cr but he can control the ball well and ive seen him beat players on the 1v1 more then once. dont know what games yall are watching.

Bale is still too shy. players can mark him out of games easily. he needs to demand the ball alot more and generally just make himself available more imo

he spends most of his time making runs behind the defence waiting from a long ball from Alonso or Ramos, as a result we become a little predictable

Sorry, but to me Bale has been outstanding. He takes his shots... but is smart enough to use his teammates and play the space rather than forcing it. Also tracks back to my amazement. He understands the game.