Discuss upcoming games that is going to be shown at E3.

Xbox One E3 showing will 'get it right,' assures Microsoft exec

Microsoft executive Aaron Greenberg has further reiterated that the company's E3 2013 press conference will shed light on many gamers' issues and concerns surrounding the recently unveiled Xbox One.

Since the console's unveiling last week gamers have questioned the Xbox One's handling of preowned software, the privacy implications of its always-connected Kinect peripheral, and the company's decision to leave the bulk of its gaming announcements until E3 2013 in June.

Greenberg, who serves as Microsoft's chief of staff for interactive entertainment business, took to Twitter (via OXM) in response to a complaint about the Xbox One needing to check-in online. "A lot of assumptions but very little based on facts," he said. "We will share more at E3. We will get it right."

Responding to a comment questioning the mood at Microsoft's Redmond HQ, Greenberg responded by saying the "mood is positive, good to be able to start sharing what we are doing. But too many details to cover in one day. Stay tuned."

When asked if Microsoft will showcase indie developers at E3, Greenberg pledged that "our team loves indie devs too" and that fans needn't worry.

I should mention btw that despite the floors will be open to the public on the 11th, that Microsoft's presser will be on the 10th.

Do you know when the Sony presser is ?

Sony will hold its E3 2013 press conference after Microsoft, Ubisoft, and EA.

Away from the standard PS4/Xbone talk.

Talk that Retro Studios, the people behind the Metroid Prime trilogy and DKC Returns among other things is going to reveal what they are doing for the Wii U.

Should be interesting, they are a brilliant team.

Obviously Nintendo will want to hit hard at this E3 and then show it to everybody else during the Nintendo Direct . I expect a new Mario Kart to be shown , they need that in time for Christmas to sell the Wii U !

Really hope we get some massive surprises in terms of games.

Most excited for the Nintendo conference.

Please Nintendo just hit it out of the park this time. I know we will see Smash Bros and Mario, but I really want to see what else you've got. Just show off something unexpected. You've been doing so awesome with the 3DS, now show the WiiU the love it needs.

The voice actor of Ryo Hazuki in the shenmue series posted these pictures on twitter the other day.. hinting at an e3 reveal.. (Also, When Shenmue 2 came out Arsenal won the league, if this happens, Arsenal to win the PL in 2014?

RealGunner wrote:Really hope we get some massive surprises in terms of games.

We will, its a new generation. These companies have to convince us to get our wallets out.

This is the time when its likely that you will see new ideas and risks taken.

No way we are getting a Shenmue 3 .... they need to make the HD version's first , to raise awareness about the game , and then after , maker the 3rd ... but i doubt even that's gonna happen ... we've been waiting for years and Sega are just a bunch of pussycats ...

The voice actor of Ryo Hazuki in the shenmue series posted these pictures on twitter the other day.. hinting at an e3 reveal..

(Also, When Shenmue 2 came out Arsenal won the league, if this happens, Arsenal to win the PL in 2014?

I remember you saying there was some ground behind it yet not to this extent. Seeing Yu & Ryu's voice actor together can only mean one thing.

Frankly I am still sceptical after years of disappointment. Yu Suzuki apparently doesn't enjoy the industry any more. Reason for its "delay" is that Shenmue costs a shit ton of money to produce. Part I is the 2nd most expensively produced game of all time. Fanbase is limited and based on cult followers while Sega is literally bankrupt.

I think maybe after more than a decade of wait, Suzuki and his team have decided to serve the fans a conclusion to Shenmue. How he left us hanging with Part II was criminal. Plus with his ambition and new generation technology he can implement his original ambitions which exceeding the hardware of Dreamcast.

Been more than a decade since I've played it and I remember each and every single detail in both games. Would be over the moon if this project was real, no matter how long it takes to produce, as long as it exists.


Montreal —May 29, 2013 — Today, Ubisoft revealed its lineup of titles for what the company expects to be one of the most significant editions of the Electronic Entertainment Expo (E3) in years. At 3 p.m. PDT on June 10, Ubisoft leads off with an invitation-only media briefing at the Los Angeles Theatre that will feature first looks at Ubisoft’s upcoming lineup, including exclusive next-generation games, innovative editions of popular franchises and new brands and titles.


Following the press conference, E3 attendees can visit Ubisoft’s booth (#1023 situated in the South Hall at the Los Angeles Convention Center) to check out a number of highly anticipated games, including Assassin’s Creed IV Black Flag, Rayman Legends, South Park™: The Stick of Truth™, Tom Clancy’s Splinter Cell Blacklist, Watch Dogs and more. Throughout the week, there also will be a number of special guests and live performances at the booth.


“This is a pivotal moment for the video game industry, and E3 is the opportunity for us to share our vision for the future,” said Yves Guillemot, co-founder and CEO, Ubisoft, “We have many incredible games in development, and we’re especially excited to share more on our next-gen titles, which will deliver more connected, immersive and interactive experiences to our fans.”


As the industry transitions to a new console cycle, past market trends and Ubisoft’s internal estimates indicate that within two years the next-gen consoles’ installed base could double that of the previous generation over a comparable period. Ubisoft’s cross-studio collaboration structure allowed the company’s creative teams to get an early start on the transition, with next-gen games like Watch Dogs already scheduled for release this year and more next-gen titles to be announced during E3.

In addition to its E3 activities, Ubisoft is creating the Uplay Lounge, a space near the Los Angeles Convention Center designed to give select Uplay members hands-on experience with Ubisoft’s E3 lineup and the opportunity to discuss their favorite titles with members of Ubisoft’s development teams. Uplay® will have pre-show coverage and a live broadcast of Ubisoft’s media briefing.

Ubisoft’s media briefing will also be available to watch live or on demand on Ubisoft’s YouTube channel and press partners are welcome to embed the YouTube live video feed on their site using the embed link. All of Ubisoft’s videos and trailers will be available on YouTube.

After GTA5 I would fap fap fappity fap all over a new Red Dead game.

Lol good luck with that Tom, games like Red Dead take like 4-5 years to make so you won't be getting your hands anywhere near that to at least 2015.

Luckily the Red Dead series is made by a different dev to GTA.

Red Dead Redemption is Rockstar's finest work. It was literally twice as good than GTA IV in every possible way. I don't play games when I finish them yet I spent almost a week just roaming around on a horse and absorbing the depth of the game.

All this hype about GTA V as it probably will be better than RDR, yet Rockstar need to realize the potential of creating another Read Dead following up with GTA.

It takes longer and comes after because the developers know the calibre of the game which exceeds GTA.

I'm sure they do Arq, after all it wasn't just a critical success it was a commercial success too and fans are consistently clamouring them for a sequel.

But as i said Red Dead Redemption was mainly worked on by a different developer than GTA 4 so it could be worked on already.

Especially when you consider work began on GTA 5 as soon GTA 4 ended.

These games take so long make that its impossible to bring out GTA 4, Red Dead Redemption and Max Payne 3 all in space of 4 years with one team.

Major Nelson says Microsoft is putting together a definitive list of answers to lingering Xbox One questions, and that "they look pretty good."

Microsoft has said it is "listening" to the various complaints and concerns surrounding the unveiling of its next-generation Xbox One console last week.

Microsoft spokesperson Larry "Major Nelson" Hyrb said that Microsoft is readying up a series of answers relating to key concerns over DRM, the need for the console to check-in online, and a perceived lack of focus from Microsoft on gaming.

Responding to a critical statement on Twitter, Hyrb said that "I am working on rounding up answers, and they look pretty good. Once I have them all I'll make a post."

"And yes, we are listening," he asserted.

Many core questions about the nature of the Xbox One currently remain unanswered by Microsoft at this point, though the company has repeatedly assured gamers to wait for E3. The company earlier this week tried to calm fears about users' privacy surrounding the Xbox One's new Kinect sensor.

Last week Hryb said that "reports about our policies for trade in and resale are inaccurate and incomplete. We will disclose more information in the near future." A previous report had said Microsoft and the original publisher will receive a cut of every used game sold in stores.

I really hope they give answers on used games DRM and always online.

The main problem is the confusion surrounding it all and anger that proceeds it with all these mixed answers leading to such horrible PR.

Obviously the games too but if they give good answers to both questions then it stop a lot of the hate tbh. 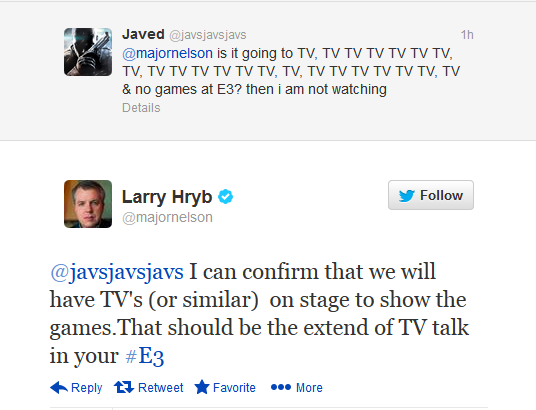 They must have shit loads to show if they are having hour long live streams during each day of the event on top of their presser.

So apparently Sony won't have DRM for their games , and for 3rd parties , it's up to them to choose ....

Good news if true but having said that i can't see publishers turning down potential profit somehow....

Page 1 of 40
Permissions in this forum:
You cannot reply to topics in this forum
Latest topics
» The Official Real Madrid 21-22 Match Day Thread