After months of speculation, rumors and fierce negotiations, Take-Two Interactive has officially acquired the exclusive rights to the WWE video game license for the next five years and will publish the popular wrestling franchise as part of its 2K Sports brand.

Video game publisher THQ, which has held the exclusive WWE gaming rights since 1999, was forced to sell its assets after the U.S. Bankruptcy Court struck down its potential sale to Clearlake Capital Group in January.

The first WWE game under the Take-Two umbrella will be titled "WWE 2K14." As part of the deal, Take-Two hired key employees from THQ to work on the game with their design team. The company also agreed to work with longtime WWE games developer Yukes from Japan for the game, and plan to release it in the fall.

"Everything that we've done with NBA is what we're trying to contribute to WWE," said 2K Sports VP of Marketing Jason Argent. "So the growth that you've see in the NBA franchise from the authenticity in the game to the excitement of the marketing that surrounds it is all something we expect to add to the franchise. We're going to create one hell of a video game franchise."

1. Take Two do a great job with basically anything they touch and expect similar with the WWE games.

2. Unfortunately the developer is f*cking Yukes who haven't changed a thing to their games since Here Comes the f*cking Pain.

If they can get a decent developer on board then it will be very good IMO.

No Take Two is a publisher.

Haven't bought a WWE game for 5 or 6 years but I might buy it. I need to make a guy and call him sully Muntari then take the world by storm when I beat John Cena and The Rock in one night ffs

I'll make a stable with 'Arry RedKnapp as a manager, i'll give him the hot Diva manager entrance and he'll hang all over my Wrestler and do the splits on the rope and shit

I dont understand how hard it can be to make a good wrestling game, just take HCP, add the new superstars, improve the graphics and then sell it.

Stephanie McMahon announced on Twitter that The Rock will grace the cover of the WWE 2K14 video game:

This has been news for a while now and I thought I'd post it here for those of you that don't know about it.

The most interesting part about THQ as a company dissolving is that the WWE license(THQ's biggest source of income tbh) changed hands. That license now belongs to Take Two Interactive, makers of 2K games(and 2K Sports games like NBA 2K, etc).

This was the last WWE game made by THQ: WWE 13

And a few other videos about it I found


Okay I think these are WWE 13 gameplays but oh well

A new development is, IT WILL BE RELEASED FOR PC!. Yes, this is news for PC gamers like myself who haven't had a WWE game since RAW Impact which was like a decade ago.

My conclusion: I have enough confidence in Take Two to revive this franchise because it had been stale for like the past 5 years. The graphics do look shoite but that's to be expected, considering the shift in ownership just happened this year. The major changes will probably be next year, although I'm definitely getting the game this year. I've waited long enough

FFS I searched the forum for that


NEW NAVIGATION SYSTEM
The entire navigation system has been overhauled and reanimated including all walking, running, and dragging motions to give the game a more fluid and life-like feel and look.
Overall Superstar movement has been accelerated, meaning the action is faster-paced and more like what you see on WWE television.
There is now a "starting up" animation for when Superstars begin running. This leads to a more natural-looking match, where it is more difficult to "spam" running attacks.
Animation gestures have been added such as adjusting wrist bands, motioning for your opponent to get up, and many more to give a human-like appearance to the navigation system.


REVERSAL SYSTEM IMPROVEMENTS
Reversing a grapple move now causes the reverser to do a move of his/her own automatically.
This cuts down on the endless back-and-forth "reversal fest" some users complained of in WWE '13 while also making the match move faster.


CATAPULT FINISHERS
Catching Finishers can now be executed offensively, by Irish Whipping your opponent to the ropes with a finisher stored or catapulting your opponent up when they run towards you.
Select finisher moves give you the ability to launch an opponent into the air and then hit them with a Catch Finisher on the way back down.


NEW OMG MOMENTS
New multi-man OMG Moments added to help you gain the upper-hand in multi-man matches. One OMG move can take out two opponents in one shot making it easier to get the win against multiple opponents.
Double Attitude Adjustment
Double Shellshock
Double Chokeslam
New OMG Moments added to allow you to dole out even more damage using the ring environment.
Boot-to-head on outside ringpost
DDT on the apron


TWO-COUNTS
One of the most reviled bugs in WWE '13 was the dearth of two-counts. This issue has been addressed, bringing back the dramatic near falls you know and love.

Why not IMO moments?

If only season mode from here comes the pain/shut your mouth was in it. Where you get to roam around backstage etc.

Last game I bought was Smackdown vs RAW 2010 which was pretty good. How are the recent ones? 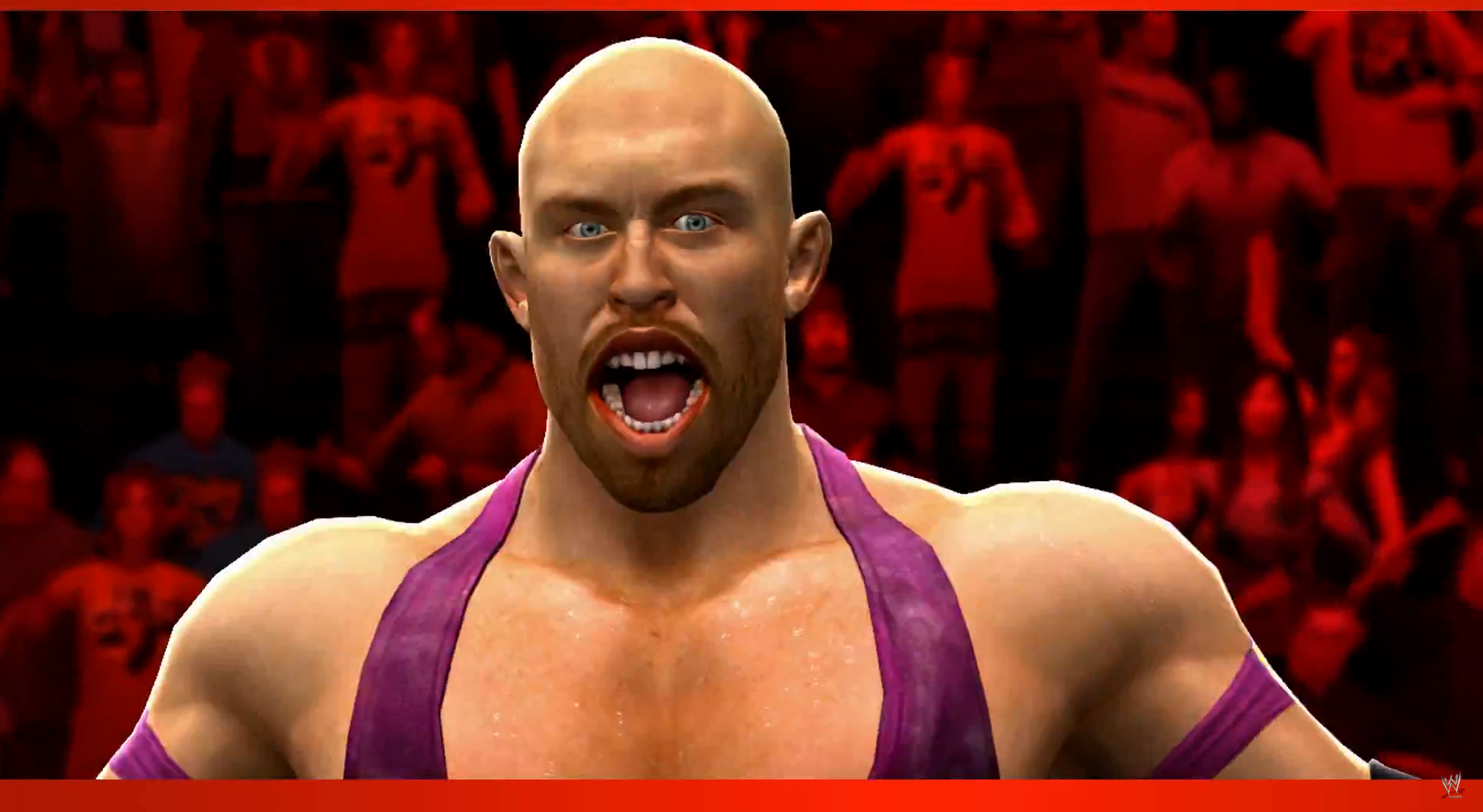 
I'll buy 2k13 whenever just to get used to the controls, which will no doubt be similar to what they'll have on 2k14. So I can go online straight away with my lamb mask and jump people

I swear it was better on Smackdown 'shut your mouth'

Don't hate on SYM ffs that was legit.

Story mode was good too, that armageddon 6 man hell in a cell main event undisputed title story line followed up by Royal Rumble, NWO and WM

I remember that HIAC match Mole

Of course every SINGLE.TIME. I would do the right thing and break open the door, climb onto the roof and most people would follow me up

But one time, I slammed a guy through the the two hatches on the top of the cell only for somebody to pin somebody else whilst I was recovering

Was brilliant tbh.... had a 6 man hell in a cell for the title and HHH would come out and attack the winner like he did in real life.

Some of the storylines on the WWE games were fantastic.

Online will be great when it's all sorted out

I hired 2009 on the ps3 ages ago, and my mate had it anyway. We went online in tag matches and this one match was messed up

Some massive fat 'create a wrestler' on the other team was called Mr. Peanut, he had skinny legs, massive torso, pink trunks and a tophat + monacle. Plus he had some mental diva moveset

He absolutely destroyed me and my mate for the entire match because his stats were like John FKN Cenas so my mate pulled the reff down (You can get away with it a few times) then attacked Peanuts teammate with a chair. I grabbed a sledgehammer and smashed Mr Peanut with it and we won. But got smashed for a good 15 minutes.

Yeh the graphics don't look the best. Hopefully they're good for 2k15.

Great Leader Sprucenuce wrote:I wouldn't get your hopes up Tom....

Yeah still made by Yukes, meh. I like WWE 13, picked it up recently. The graphics could be better and there's a whole lot of glitches(like doing a move and I end up standing on my opponents head dafuq), but it's still pretty fun to play with a couple people or just Attitude Era. From the Trailer it looks like they are gonna take you back farther, like in the 80s Macho Man, Hogan, Ric Flair

Attitude Era mode in the latest one is tons of fun though. Recreating D-X.  All the cheap shots HHH and HBK pulled

The HBK/Undertaker match where Kane first comes out.

Similar topics
» Video Game Music Thread
» Your favorite Video Game characters.
» Diego Maradona-The Video Game
» If you were stuck in the last Video game you played..
» Now THIS is what I call playing a video game.