This is an extremely good signing. De Jong is one of the best DMs in Europe, perfect replacement for Van Bommel. Now before the trolls start saying DMilan, De Jong is the only good DM in our squad. Ambrosini is way past it, Flamini is seriously meh and Traore is

I do take reservation with the statement that he is one of the best defensive midfielders in Europe, however he does fill a need within the squad and the deal is an inexpensive one, it's an improvement to our first team at the very least and he should be very handy in Europe.

Was he a free transfer? or Loan with option to buy?

OT: De Jong is a thug but indeed a very good DM. As the OP says, one of the best in europe

the best u can find to replace MvB.. the absolute best

M99 wrote:This is an extremely good signing. De Jong is one of the best DMs in Europe, perfect replacement for Van Bommel. Now before the trolls start saying DMilan, De Jong is the only good DM in our squad. Ambrosini is way past it, Flamini is seriously meh and Traore is

made a thread about this in gen sec

Pretty sure its a done deal. Inzaghi said this on the official website:

MILAN - Here's what Pippo Inzaghi had to say about Milan's new signing: "De Jong was on the other side of that legendary 3-2 and in other Champions League matches between Milan and Ajax. He'll be very useful, I'm happy he's here."

De Jong was actually my first choice to replace MVB at the end of the season, so im quite pleased with his acquisition. Although he might be a psychopath, i'd rather he be on our team than the oppositions

The Dutch defensive midfielder revealed that playing for the Rossoneri has been a childhood dream of his, and is looking forward to seize the opportunity.

He also challenged his new team-mates to compete for honours both domestically and abroad - saying the quality of the squad is good enough to fight on all fronts.

"I'm happy, AC Milan is a great club and they are a new important chance for me in my life," he told Sky Sports Italia.
"Everyone knows AC Milan's history. Everyone wants to play for AC Milan as a child.

"With this team we can compete both in Italy and in Europe, we have so many good players."

AC Milan CEO Adriano Galliani has praised his clubs recent moves in the transfer markets, and told coach Massimiliano Allegri that only winning Serie A would be an acceptable return on this summer's spending.

"We think De Jong is one of the best defensive midfielders in Europe," he told TV 7 Gold.

We believe we are making a good last market week with Niang, Bojan and De Jong. We thank president Silvio Berlusconi, who again has built a competitive AC Milan to win the Scudetto. LOL

"[AC Milan coach, Massimiliano] Allegri has to worry now because our goal is no longer the third place, but the first. Among the players arrived in Italy from abroad, De Jong is the best."

Does Allegri seriously expect us to believe that De Jong is some footballing god and that we should kneel before Berlusconi and Galliani since we are not worthy of De Jong's presence?

I think Galliani expects us to kneel to Berlusconi. Allegri is just talking up his new player as per usual.

Galliani is probably saying that we got u what u asked for, now start winning.

though galliani is bragging too much, bojan de jong pazzini mbaye is good signing but is not enough to win scudetto, they are all good players but not like champions who would make difference consistently.

atleast i hope they prove me wrong. i rate our squad is ok atm... well atleast good enough to finish 3rd...

but de jong for 3.5 million (pounds) is quite a good deal.. a very good deal 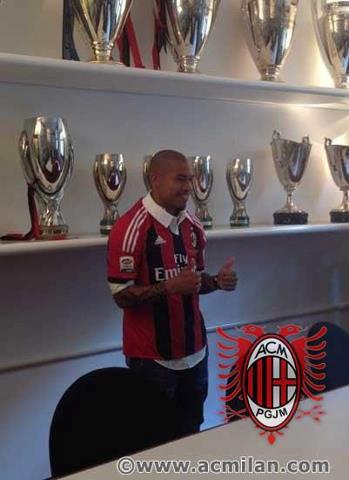 Good signing for sure

Full ownership, Great defensive mid. I can't wait until he gets into the pitch

Page 1 of 1
Permissions in this forum:
You cannot reply to topics in this forum
Latest topics
» OFFICIAL : Cristiano Ronaldo returns to United

Today at 6:18 pm by The Demon of Carthage