When i hear it on radio this morning i was quite surprised... our first victory vs USA since 30 years can you *bleeping* believe

Very lucky to play in CONCACAF where all nations except Mexico have mediocre teams that are built only on strength and running. In the end Gold Cup and Nations League have no importance, exhibition games from european NTs are more interesting, what really matters are the 3½ spots for World Cup 2022. You will qualify and we won't.

Clutch wrote:I honestly think that Americans just dont understand the sport. They treat it like basketball or football when it comes to evaluations or it's just super political and the good players slip through. I played at a very competitive level growing up and they're are some really good players I've came across, I dont know what happened to them though. Most of those players were foreign also tbf

Yup, there are stories like this all over. Had these kids lived in Europe, South America or even Mexico, they would've had a much better chance of getting discovered and that talent being nurtured to higher levels of the game. Would they have ultimately made it? Some would've, others wouldn't have. Either way, they would've had a much better chance than they do here.

And that's because, for some mystifying reason, soccer is still seen as a sport of the affluent and suburban where everywhere else, it's the sport of the poor. That's American capitalism for you though. We can monetize literally anything, even a sport that requires essentially nothing more than a ball at your feet. The lack of access or path to progress gated by significant costs in the youth game was a major topic in the run up to the USSF elections. Everyone knows there's a problem, there just isn't much will to change things to solve it. USSF are raking in far too much money with the current model and if they can keep polishing the turd that is our Men's program to gaslight people into thinking it's not as shitty as it actually is, they'll do that as long as they can get away with it.

Only way to change things is stop watching this awful team, both on TV and in person. I have 0 incentive to watch them as of now so this will be easy. I'll spend my money and TV time watching the Women's and youth teams instead.

Also, it should be noted that Tata Martino, Oscar Pareja and Julen Lopetegui all expressed interest in the USMNT job before Berhalter got the job.

Martino was coaching a MLS team wasn't he? Kansas City? Atlanta? Dallas? (Remember it was something with lots of A's lol) Apparently the language barrier wasn't that big of a problem there.

Not only did he coach Atlanta, he won an MLS cup with them. Language was absolutely not a barrier then and Atlanta reaped the dividends. It paints the USSF in an even worse light.

And now he's coaching Mexico, who destroyed us in our last meeting.

McLewis wrote:Also, it should be noted that Tata Martino, Oscar Pareja and Julen Lopetegui all expressed interest in the USMNT job before Berhalter got the job.

Imagine rejecting a coach with Barcelona and Argentina in their CV

McLewis wrote:Also, it should be noted that Tata Martino, Oscar Pareja and Julen Lopetegui all expressed interest in the USMNT job before Berhalter got the job.

Imagine rejecting a coach with Barcelona and Argentina in their CV

I laugh at this delusion in order not to rage. The arrogance of the USSF knows absolutely no limits.

It has had absolutely everything expected of rivalry of this magnitude.

I doubted this USA team and they've proved me wrong. Gutsy win against a very experienced Mexican side. Lost their starting keeper and his backup (Club Brugge's Ethan Horvath) has come in to make several big stops and save a penalty deep into extra time.

Weston McKennie has been absolute lion. Pulisic wore the armband, but this man is the captain. Heart and soul of this team.

Gio Reyna is as much a generational talent as Pulisic. Scored and assisted in the biggest game of his international career....at 18.....oh and he got hit in the dome by a missile from the Mexico fans....that's his proper introduction into this derby.

What is the point of VAR sometimes lol

They used VAR for both pens. The ref initially didn't call either pen, which was the correct call. Then he went over to the monitor and changed both of his decisions to a penalty, which was the wrong decision.

They canceled each other out, at least. Not to mention the use of VAR to get the Mexico goal ruled out for offside, which was the correct decision.

Anyway, the match was a classic and it's good to see the US go home with a win in a big cup final against Mexico.

Yeah that ref was a mess. The occasion was too big for him.

I still don't think Berhalter is the right coach and would've much preferred Tata with this group, but Gregg did make the right subs deep into the game. They were all pretty much game changers. I can't forgive him for taking off Dest and putting Ream at LB against such a speedy player like Lainez, who dutifully skinned him several times before Acosta got moved into that position.

This group has a lot of character though. I was not expecting that type of fight back.

You could clearly see USA's lack of experience at the back. They are clearly dont have enough chemestry yet and it was the main problem to fix. As the game went on it got better but the transition from the defense to attack was just disorganized and would go awry. USA got through with grit alone at the back. The front was at least talented enough to breack through Alvarez Araujo and Moreno. All in all tho this game was the greastest Ive seen yet and USA finally after 14 manage to defeat Mex in a final

So no one really cares about the US here (including me tbh) but the past month has been like a soap opera for them. A condensed summary for those out of the loop.

Involved parties:
-Gregg Berhalter: Coach of USMNT, former player of the NT. Has a contract expiring at year-end and is looking for an extension.
-Giovanni Reyna: Borussia Dortmund winger, considered one of the most promising young players in the squad. Fans were looking forward to his WC performance.
-Claudio Reyna: Giovanni's dad and former USMNT captain. Close friend of Berhalter, played with him in high school, college and professionally. Their wives were college roommates.

World Cup: In spite of a lot of hype, G.Reyna barely played in their 4 games, leading to a lot of questioning of Berhalter by fans. While the US achieved Last 16, they were soundly beat by the Netherlands and a lot of fans were asking for an upgrade over Berhalter for the next world cup. The US federation was assessing whether to renew him or not.

Dec 12: Gregg Berhalter, completely unprompted, talks up his managerial experience by mentioning a "problem player" that "almost had to be sent back home". The player was a hot prospect that upon joining the team for practice was informed he would rarely play and did not react well. He encouraged the relevant parties to address it, the player changed his behavior and was allowed to stay with the team. 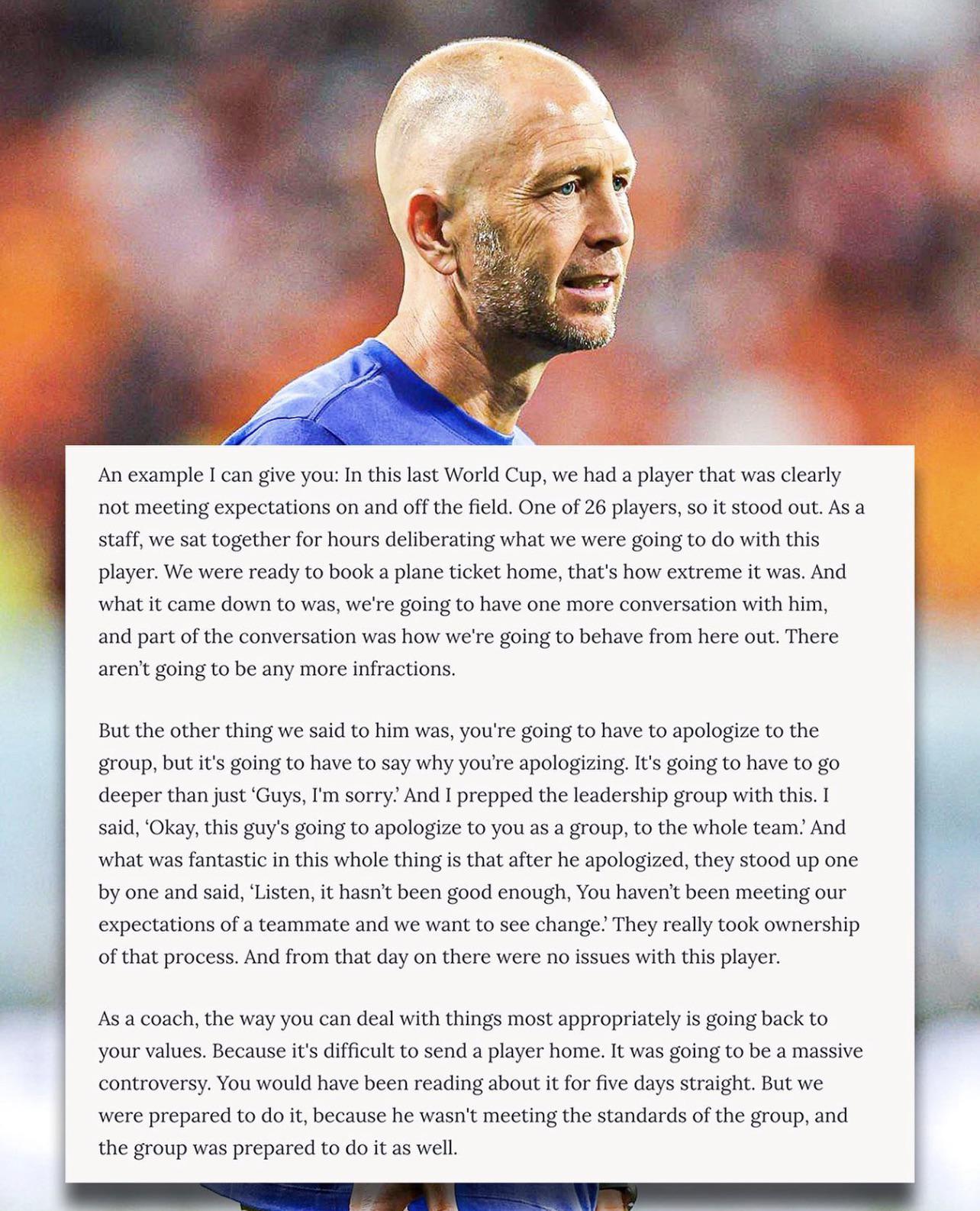 The media and fans quickly identify the unnamed player as Reyna, causing him to publish a response

The incident was regarded as odd. These kind of items typically stay in-house and it was obvious people would know who he talked about. It was widely regarded as a clumsy attempt by Berhalter to increase his managerial clout with the media that backfired.

Dec 31: Berhalter's contract deadline comes and no news from the US federation on whether he will be renewed.

Jan 4: The US federation announces it has completed an investigation onto allegations of domestic violence by Berhalter that occurred 31 years ago.

Berhalter and his wife publish this joint statement as well

In summary: It says that in college when just started dating his now wife, he once kicked her while going out. The couple broke up, Berhalter sought therapy and apologized, and a few months later they were dating again. They're now happily married and the incident has never repeated itself. He's announcing this private event now because he was blackmailed with this information during the world cup.

A few hours later, it's discovered that the blackmailers are Claudio and Danielle Reyna, upset that their son did not get more playing time and that Berhalter had publicly shamed their son after he asked for forgiveness in spite of him "doing something much worse at a similar age".

U.S. Soccer did not receive any details about the claims against Berhalter until Dec. 11, when an executive was informed in a call with Claudio and Danielle Reyna that Berhalter, 49, had a past domestic violence incident, sources told ESPN.

So that's where we stand

Both parties come off as idiots here imo, Berhalter for sharing locker room stuff recklessly and then the Reynas for being such scum. If the Federation was planning to extend Berhalter's contract then they should still do that while blacklisting Reyna. Fuck em. Although USMNT seem to have a fishy role in all of this as well.

Yeah regardless of how this plays out its clear the main losers are Gio (who will now forever have a stain on his record for the crime of sulking for a few days) and Berhalter's wife who didn't deserve this being public knowledge.

I think it's interesting that in Gregg's account he was threatened (that he will be "brought down") and in Danielle's that she just merely vented about how "unfair it is he won't forgive after we forgave him". So which is it, was he blackmailed or not?

This is peak soccer parenting shit right here. You'd expect to see it at the lower levels of US Soccer, but because it's so pervasive and ubiquitous at all levels, it's reared it's really ugly head in the most public way possible.

One of the truly best feelings I had, as a referee for the local rec league, is throwing out unruly parents. That's a power trip I would absolutely overdose on. It's a great high.

Thank you very much for the write up, BC.

This is astonishing. I read the Berhalter thing during the WC about how he had a player (everyone immediately knew he was talking about Reyna) apologize and I thought it was a massively odd and dumb thing to say publicly, especially how proud and self-satisfied he sounded while giving out way, way, way TMI.

Now of course, this behaviour of Reyna's parents is another level, and they've hurt their son mostly who funnily and sadly enough is probably the biggest talent this hopeless football nation has ever had.

Would blacklisting him because of his parents behaviour be fair? Would it be the right thing to do?

it's petty... fire the coach, and free Reyna.

WHAT A WEEK FOR THE 20-YEAR-OLD! pic.twitter.com/Mqd2QPnhU5

He's been pouring more and more egg on Berhalter's face each time he scores post-WC.

Today at 3:21 pm by BarrileteCosmico