Goodson is much slower than OG and Brooks is not at OG's level yet. I think Klinsmann finally did some justice putting him on the first team.

Is it possible to be slower than Omar Gonzalez ?

Honestly, this game made me feel quite comfortable about our chances of finishing second in the group. Our defensive shape was fantastic, and when we broke down there was always another player sliding in to cover. We dictated the middle of the pitch and forced everything out wide where Beasley and Johnson had the wings locked down. Admittedly, I think this was the best defensive performance I have seen from the US in a very long time.

However, more than anything, getting Jozy going was important and once he scored, whether he admits it or not, you could see him ooze the confidence we are used to and everything from then on was top notch including that amazing golazo on the second

Regarding the bad, it is not surprising the penalty only came after Gonzalez came on leading to the defensive breakdown and Besler taking down Moses. Gonzalez has no business anywhere near this team. Personally, I would send Gonzalez, Green, and Yedlin or Chandler home and replace them with useful pieces: Parkhurst, Donovan, and Corona.
_________________

@Motogp69 wrote:Our defensive shape was fantastic, and when we broke down there was always another player sliding in to cover. We dictated the middle of the pitch and forced everything out wide where Beasley and Johnson had the wings locked down. Admittedly, I think this was the best defensive performance I have seen from the US in a very long time.

@Motogp69 wrote:However, more than anything, getting Jozy going was important and once he scored, whether he admits it or not, you could see him ooze the confidence we are used to and everything from then on was top notch including that amazing golazo on the second

the finish on the second was emphatic! confidence is such a difference maker ... the beauty of the goal was also in the build-up, with the one-touch passing, and Bradley executing a true trequartista assist ...
_________________

Beckerman- Jones partnership is the way to go! Look how free bradley was...

Lets go to war. I think this should be the starting 11..Very defensively sound and Bradley is going to be free to do control the game and do whatever he wants. The beast with Beckerman and Jones behind him will be unchained. Altidore needs Bradley behind him as well.. And in a 4-2-3-1 Clint can play on the left and drift in and come in late. He sucks when he plays up front. But I think this will be the best balanced team we can field, with the most chemistry.

as soon as I saw which team was wearing red, my concerns disappeared ... 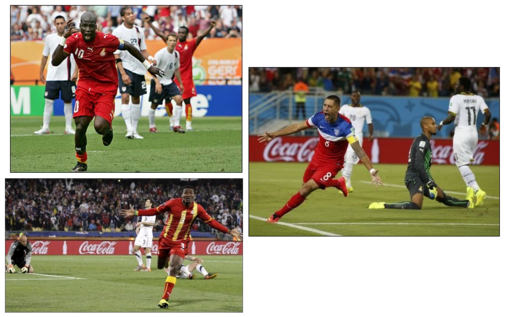 How do you think we will fare against Portugal? Coming off that awful defeat by Germany has to ignite some kind of a fire under their team.

To put it in simple words, the Portugal side is too individualistic whereas our play is all about team work. I think we can get a favorable result.
_________________

Not to mention an extremely limited Ronaldo

I noticed that MLS matches are being played during the World Cup. What about the MLS players that are playing on the US team?

@Hapless_Hans wrote:Are there plans to adapt the MLS calendar to the European and FIFA calendar?
Are there reasons to not do this?

It is the most heavily debated issue involving mls probably ever. But ultimately I don't see it at least not for a long time.. Because first there's the weather.. Places like Colorado, New England, Canada, hard to imagine playing there in Winter.

Also, there's is a lot more competition in terms f other sports during the year that could effect mls attendances. Mls only really has to compete with baseball on it's current schedule for the majority of the year.

It would only happen if the sport boosted majorly in popularity where it wasn't afraid of competing with the nfl, nba, nhl, college sports, for the majority of it's schedule and where the league has much better  cash flow so that the teams in colder areas could possibly afford to build domed stadiums or something of that sort.

Personally I hope it is possible one day.. Because I hate how little attention the biggest, most important games of the year get overshadowed by just normal regular season NFL games and MLB playoffs. I'd rather have some regular season matches get glossed over rather than the title competing matches. Plus, it would help align the transfer windows and Champions League. Plus, missing players for international duty for soooo long is just absolutely killer.. and imo hurts the leagues legitimacy. People wouldn't stand for it in the NBA if players like Lebron and Kevin Durant missed massive segments of the season because of the olympics or something.. It would cheapen the results that happen in their absence.. as teams get punished for having better players, essentially..

Under the best case scenario though, I think it would still have to have a massive, even longer than Bundesliga winter break, followed by teams like Chicago, Montreal, New England, etc. playing their first 3 or 4 games back from the break, away at places like Orlando, San Jose, LA, etc.
_________________

Pepe out, Coentrão out, Rui Patrício out (though I believe most are happy Beto will start), and Cristiano not looking 100% ... 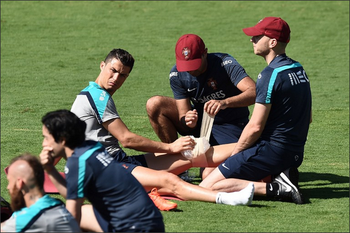 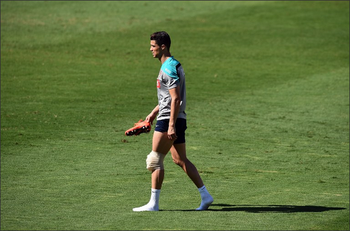 One player I think deserves some attention is Matt Besler.

This kid has been absolutely amazing. Some other defenders have let us down. Only MLS'er on the back line and he's been by far the best of them all, which is pretty hilarious honestly. His positioning and reading of the game are simply amazing.

There are not many defenders that I think are worth DP spots in MLS. But Besler is 100% worthy.

@Artilleristen wrote:Has anyone else been underwhelmed with Michael Bradley's play in the WC?

He's been a bit underwhelming. First game he had to chase the game and was pretty much neutralized. Against Portugal he showed his class, however he had two crucial mistakes (giving the ball away at the end, and he didn't convert on that sitter)
_________________

@Artilleristen wrote:Has anyone else been underwhelmed with Michael Bradley's play in the WC?

Enraged would be a better word tbh.