Behind the scenes tour of your teams stadium

Behind the scenes tour of your teams stadium

After reading a thread on the Sunderland forum where some one has been on a stadium tour, I thought it would be cool make a similar thread here where you can post pictures of cool features and information relating to your teams stadium, fans of other teams might not know about or have seen.

When you enter the Stadium of light by car you see this giant Davy lamp monument. A tribute to the mining industry of the area. The SOL is build on the site of a old coal mine.

Apparently when Roy Keane took over, he said too many of the walls were bare. So had various pictures of former players etc hung around the tunnel.

He also had this hung at the exit of the dressing room which players pass as they head towards the pitch.

Exit of the tunnel

The main thing I wanted to post was a few pictures of the main entrance to the SOL. But unfortunately there are not many around on the net. The main entrance is all marble and was designed to house this painting, which is quite historical. 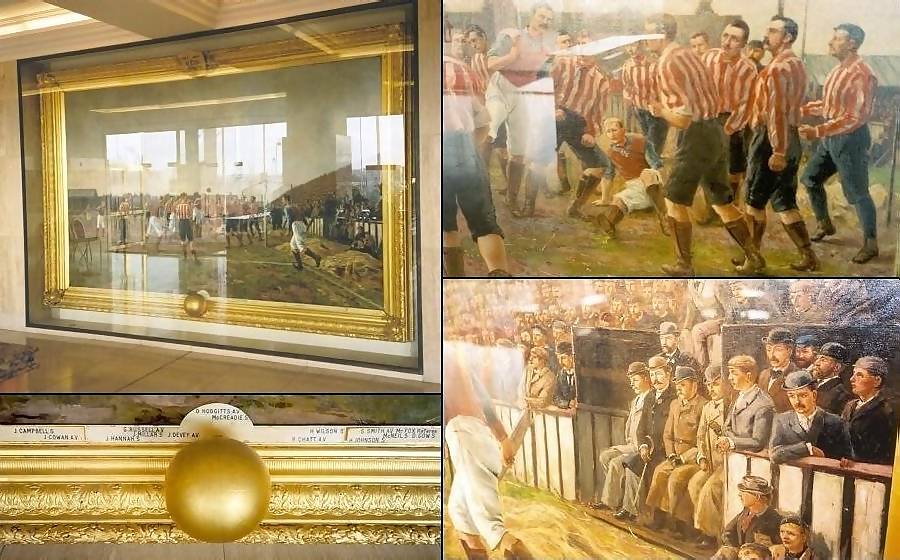 Those pictures dont really do it justice, it is much more impressive to see up close. It was painted in 1895 to celebrate Sunderland winning the title 3 times, depicting Sunderland Vs Aston Villa. It is the oldest painting in the world of a profesional football match.

The painting is huge, the gold ball at the bottom of the painting is the actual size of a football. In the 1900s the club nearly lost it. In a bid to raise money they offered it as a prize in a raffle. But the winner never came forward to collect it, because it probably wouldnt fit in any ones house.

Re: Behind the scenes tour of your teams stadium