oh well.. we're screwed.. only possible hope is that we play him in the DM spot.. but even then idk if it's worth it.

I'm now reading the link and I would have been okay with this if we lowered his buy-out clause. Little did I know it is for 100 MILLION

He cant play DM anymore than he can play CB. Mascherano has quickly become the new Keita.

Cant get rid of him and his genuinely great attitude is the reason, not his football.

Pls lucho, don't play him as CB next season...pls 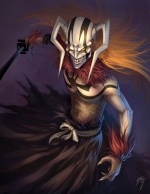 He cant play DM anymore than he can play CB. Mascherano has quickly become the new Keita.

Cant get rid of him and his genuinely great attitude is the reason, not his football.


agreed but he's less of a liability in DM then in the backline.

I am not so sure. I think it depends on the opponent.

Against a mid level and bad teams, he is more of a liability in midfield because we will struggle in build up under pressure. And thats more crucial than ever for the small teams because if they throw you out of rhythm they get alot of confidence.

He does okay at the back against bad teams because he dont have to do much and can just physically overwhelm forwards who are usually totally isolated from the midfield.

But against a strong team, at the back he will always get exposed by the world's best forwards.

I'm not that worried that he could rotate at DM in easier games. It won't be a problem against most opponents IMO. Song is mechanic and cumbersome and it isn't a problem against most La Liga teams. I worry that Lucho sees him as an integral part and leader and will attempt to play Busquets and Mascherano together in midfield permanently. He already said he doesn't see Masche as a CB and we're (hopefully) buying some defenders this summer. So now renewing him only makes sense when he gets an important role. I can't envision him accepting just the "Song role".

I think Song is a step above Mascherano with the ball, that's being kind. Perhaps he has improved since he last played there for us.

I just dont see the point of keeping him around for that Song role, Sergi Roberto can do that in his sleep.

Can he play midfield?

He has improved dramatically with the ball, no question about that. In the previous games Argentina had not pressed with the ball so it was alot easier for him but in the final Germany was doing a decent job of pressing and he dealt with it quite well.

He made a couple ball mistakes here and there (like when he got the yellow card) but on the whole, not bad.

Im torn. Before the Germany game I felt no different about him playing in the midfield, but after it, feel it might be a possibility.

The biggest thing which interests me is understanding we wont sell him and I dont want him anywhere near the center of defence any more.

IMO he can. His job at Barca will actually be a lot easier. First of all no team in the world will press Barca this high:

Unless teams want to give Messi, Neymar, Suarez, Iniesta 40 yards of space behind their last defensive line.

He'll also be surrounded with a lot more and better options. Busquets will obviously be the build-up player alongside him instead of Biglia / Gago with Iniesta and Messi coming towards the ball to aid carry the ball forward (I expect Messi to play like a #10 with Suarez upfront from now on) as well as Alves who is basically another midfielder compared to Zabaleta and Pique who can also pass from the back. At Argentina he has much more responsibility and workload if you ask me. 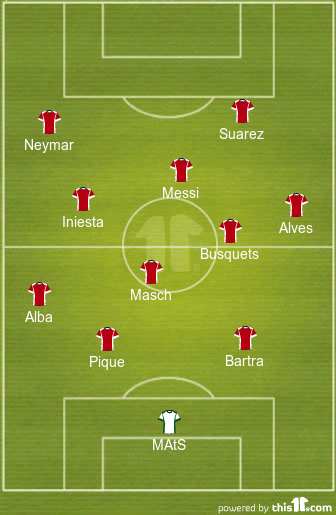 His technique is not on techno midget level like Xavi, Iniesta, Messi and Co. obviously but he ain't a turd either and his energy, defensive ability and leadership outweigh that anyway for me.

If they just add some defensive cover to this we're fixing all the issues we had last season. Lack of legs in midfield, lack of diversity in midfield (now Mascherano, Rakitic, Rafinha all adding different things) a deadly predator upfront, decent cover in the goalkeeping position (Pinto in a CL quarter final and domestic Cup final

) and hopefully some height and strength at the back. As well as a well rested Spanish core after their early WC exit. No deep tournament run like Euro 2012 or Confeds Cup 2013 in the Amazonas.

We'll have to see if he maintains his form with Barca, your right that most teams wont press us so high but they do expose weaknesses and Mascherano has constantly let us down when pressured highly, especially against both madrids.

I'd give him a chance no doubt, but move Buscuit to Mascherano's place, change alba to mathieu and bartra with a marquinhos... rakitic in the rcm and we'd be solid.

When Barca first bought him thats what they had in mind right? But he went to CB since Busquet is too perfect for the role

Barca's formation means the lone DM will always be asked to do a lot himself and requires a special player. I would like to see it tried perhaps in the friendlies and early season? Since Busquets has dropped his level recently.

His agent said he asked to go to Italy.
WTF????


It has already been denied by Masch's entourage. Juve want him but there's no way he leaves.

"Today is the Gamper party and with it begins a new season full of amazing challenges. Visca Barça!"

Masch is already 4th most capped foreigner for Barcelona. Time sure flies.

Yeah, dat tackle is probably the most important seconds of his career, Robben tackle in WC in good second.

That tackle was very important, and he showed his spirit and never give up attitue. However, it wasn't really that extraordinary as it's mostly Bendtner who screwes up because of his miscontrol. He wasn't even reaching the ball or would have shot 10 metres wide.

Mascherano has been renewed until 2019.

Page 3 of 5
Permissions in this forum:
You cannot reply to topics in this forum
Latest topics
» The Official Summer Transfer Rumours Thread

Today at 5:25 pm by BarcaLearning

Today at 5:19 pm by BarrileteCosmico

Today at 5:03 pm by BarcaLearning

Today at 4:20 pm by RealGunner