where is CSpurs and BC?

Both teams are poor defensively

Every attack nearly creates something dangerous.

I meant the Roma derby

Nuno is rotating like he can bring on Jota or Adama based on fixtures. Spurs can't afford these defeats unlike Wolves. He made the right subs after 45' mins of tactical shite and did barely average but that is the team he should have started with. Poch there and the story would be a bit different. Arsenal capitalized very well but I doubt they will be lucky to have invisible midfields with clown managers in their upcoming games.

Poch or not, Spurs are shite, pls get that shit out of my face

@El Gunner wrote:Poch or not, Spurs are shite, pls get that shit out of my face

Kane and Son can outscore your entire Arsenal generation so let's not start throwing a limp dick around.

pls post things that make sense, or don't at all

Time to give Arteta a contract extension imo

why don't you and CSpurs talk about your beloved Spurs though... where is it going wrong? Why did you hang on to Kane when he is going to half-arse performances and Nuno is going to experiment with playing him on the left to try and give him a "challenge"

Brighton could go top of the league. Unreal

Nuno is going from using a deep-block 3-4-3 at Wolves to Spurs where he's expected to control games using a more aggressive system and it's not really working out at the moment. Nor do I think Spurs have the players to control games, now that Vertonghen and Alderweireld aren't there anymore. He's relying on Alli and Ndombele to cover the flanks when they don't have the ball when those players aren't the right profile. His current set-up vaguely resembles Liverpool's, with a hard-working central midfield and a reliance on attacking wing-backs for creativity, but doesn't have anywhere near the compactness.

What Spurs did well under Poch was be a really compact team who could suffocate the opposition and sustain pressure with their pressing. Since he was sacked, they've become a more basic team. Deep block, over reliance on the Kane-Son partnership, unable to pressure the opposition all that much. Teams can keep the ball from them much easier now.

I think they'll change to a 3-4-3 soon. Suits Romero better since he can play as an aggressive outside centre back, allows the wing-backs to be attacking and keeps the narrow front three of Kane, Son + one more.

Brighton could go top of the league. Unreal

I told anyone who'd listen Brighton were a much better team than last year's table showed. Potter is a very promising manager. Much more so than the likes of Eddie Howe.

Clearly, it's because Graham Potter is the best manager in the world. I mean, he did manage the awesome, Östersund up until a few years ago

Viera has been doing very good job with Palace so far imo. Legit see them finish in the top ten at least.

@El Gunner wrote:something i noticed with Man City yesterday to look out for heading forward... Grealish is too slow for City in these tight, high pressure type of games. He is not the nifty type of player for that's needed to move the ball quickly and smartly, neither is he quick enough to spot out runs or positions on the pitch to put himself and the team in on the front-foot when attacking. Grealish is by all means just a ball-carrier that can draw in defenders and pick a pass, but he needs time and space for that.

In high pressure games throughout the season and the latter stages of the CL i do not think he should play because he'll just become a non-factor that slows down City's momentum whenever they move forward. He only came alive yesterday after City scored and hence the Chelsea defense gave him more space because they were trying to get back into the game. Now of course, i think Grealish could still adapt to the system and become more fluid in it and that could help (much like Sterling and Mahrez became more efficient in the system over time as well), but his fundamentals will never change. So let's see if Pep will be aware to this.

I want to see Grealish play in David Silva's old role as an 8. It seems like he'll be the starting LW this season instead. Foden's been training to play CM all season apparently so no more LW for him either.


I am curious how City will set up against Liverpool next weekend. Liverpool are having a mixed season so far in terms of performances. I felt like Klopp already tried 4-2-4 as a test towards the end against Wolves and it worked to great extent the last time Liverpool had played against ManCity. But 4-2-4 means surrendering midfield control. With Thiago being injured, I guess Klopp might go for the same.
Pep on the other hand is unpredictable and may go with some weird line up.

yea we've been off the hook for half of our performances this season, big game to rustle up for feathers for us. Thiago is a huge miss, he calms everything down in midfield alone.

Thiago is swiftly becoming the Xhaka-version of the Liverpool fanbase. Gets a lot of hype from some naiive fans, when he is actually more a liability than an asset.


A whole fucking essay for a penalty miss, his livelihood. Go back to Setubal you scrub.


I cant believe this is real

United definitely have the most cringeworthy PR 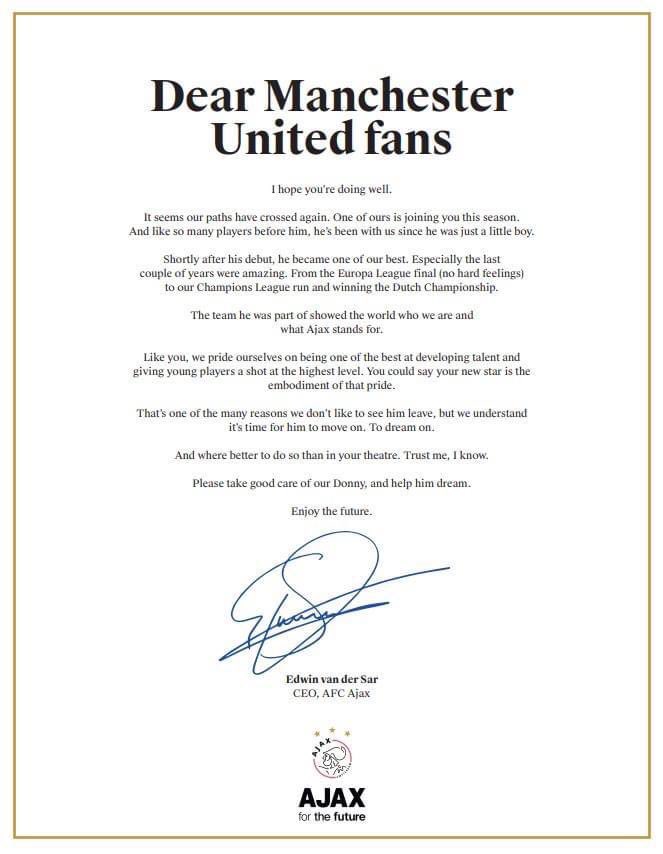 @RealGunner wrote:if our CEO wrote that he would be hanged live on AFTV

"Take good care of our Cesc"

https://twitter.com/TikiTakaConnor/status/1442790468136443906
not only was prime Arsene a very great coach, but he was also a progressive philosopher, social scientist and Marxist. Truly incredible.

Page 19 of 24
Permissions in this forum:
You cannot reply to topics in this forum
Latest topics
» Donnarumma makes his fortune at PSG