close beef in the injury derby as well
still confident i can take the W, all depends on what my boys do tonight

I stay awake til 3AM to pick up Dennis Smith Jr. now i cannot find sleep. How low have i fallen

Props to Tyus Jones he's been a great guy this week

Well i have done my best hopefully 90 pts and 32 ast are sufficient buffers, what a shit schedule

Not counting too much on free throws and steals

I must have set some sort of a record for injuries this week.

Was finally in a position to rek Habs, and 10 players miss games not even counting Lillard on IL. 4 yesterday alone FFS

I have no hope, LG's 200 dollar fantasy simulators were right after all

You were cursed for competition's sake i believe. Fantasy gods wanted us to have a real beef and now if you finally beat me the W will be deserved. I always make a count on monday you had +10 games advantage wtf.

Currently we are 1st-2nd in points-rebounds-assists-turnovers by quite large margins. I hope we can square off full strength next time it's a shame to delay this clash of big ballers.

I must have the record for # of players for one team right?


just as long as they don't go into a bubble again... play thru it, see it thru


bad strategy, but hey it's you after all

Go to the end of the process and trade for Giannis

As for DiVincenzo he could be mine. That was this morning. Fair enough 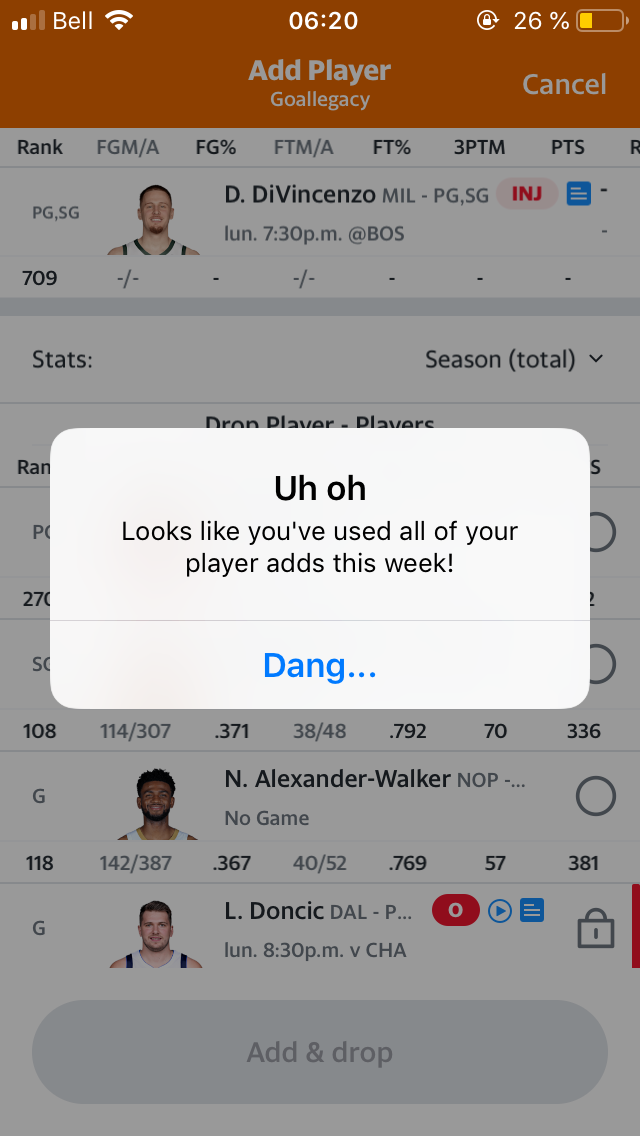 Go to the end of the process and trade for Giannis

As for DiVincenzo he could be mine. That was this morning. Fair enough

The benefits of never streaming players :')

Btw, Derrick White IS my dad, if anyone was wondering. 4 steals and a block, get in. Can he *add* to that total?

Boy is that close. Vibe you are lucky to sleep right now this one is a nail biter

Dennis Shit Jr can you even pretend to be useful ffs

Is this real life

Lillard and Simons came back so no minutes for Shit Jr and since you can't play Lillard you win turnovers. Fantasy is cruel and next time i will WRECK you

Inter's takeover is complete i am still in shock to lose vs you. Beat you by thin margins every time has been a pillar of Habs history.

It is well deserved, congrats

It may have taken 5 years and 20 beefs... But David has finally beaten Goliath.

I woke up at 6-3 for Habs, with 5 minutes remaining. Cole Anthony hits 4 FT's and gets a couple assist

It was destined. Both Russell and Lillard were INJ and playing at 3, and Russell wasn't on IL because I also had Kuzma there. So Lillard looks like he's gonna play and since you can swap INJ players around, I decide to let Lillard play instead of Russell. And as I click the swap, Russell gets INJ removed and the swap doesn't go through. Why is this important? Because Lillard missed 4 FT's and made 5 turnovers, so I would lose 6-3 with Lillard instead of Russell.

Fantasy gods looked at me tonight

what about that last minute pickup, hey?

you're always a respectful opponent Ghost and i always enjoy our tight beefs so i wanted to keep it fair and as close as possible with all the unavailable players on both sides. Bogdan was an absolute flamethrower towards the end of last season so i'm still holding on in hopes for that to happen for me, i guess i wanted to keep Harris because i want to win with as many of my draftees as possible, but then realised he's prime waiver wire whore material.

only took you so long

El Gunner wrote:
what about that last minute pickup, hey?

you're always a respectful opponent Ghost and slurp slurp

In the beef history of Numpteam and Habs, the current champions is me

Fantasy will never be the same for me

Vibe are you also getting married?

Page 17 of 33
Permissions in this forum:
You cannot reply to topics in this forum
Latest topics
» The Official Real Madrid 21-22 Match Day Thread