Honestly, Dzeko should be taken off for that miss.

Who's this lad chewing gum like he gives no fck

Barca legend Artur coming on to score that much needed goal....

If Roma wins tonight, and it looks like they are heading that way, They should give the MOTM to Rabiot.

Roma are missing 3-1 too many times 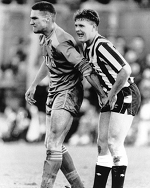 What is wrong with Dzeko?! Seriously, this is the second time he has wasted an unbelievably easy chance to score from the spot.

Danilo making a perfect cross for Ronaldo to equalize. I have seen it all

@Robespierre wrote:Roma are missing 3-1 too many times

We obviously played far better with 10 than with 11 men. Impressive debut from Arthur too. Have a feeling he'll be a regular fixture in the starting lineup soon.

Maybe with better team selection today, things could've gone differently but it's alright. It's very tough to win in Rome anyway so I'll take the point.

Pirlo got it wrong at the start and Rabiot bottled the game. Better with the subs and solid performance with 10 players.

The midfield I want to see is Bentancur-Arthur. Glad to see a bit of it. We need Alex Sandro and Dybala back to see how the team will look like. Prefer to play Frabotta at LWB than this Cuadrado/Kulusevski combination. That was the mistake at the start.


second game in a row of McKennie-Rabiot-Ramsey

well you're in luck as Rabiot's banned now


second game in a row of McKennie-Rabiot-Ramsey

well you're in luck as Rabiot's banned now


Matter of fitness. Pirlo said from the start that Arthur hadn't played in so long that he needed to get into shape and adapt. For Bentancur is the opposite, recovering from fatigue apparently. Ramsey is separate, his role is Dybala's so for now he has been a sure starter.

Pirlo was a goat today. He was afraid to start Frabotta, so he put Cuadrado out of position at LB and, as a result, Kulu on the right, who was also out of position. Dude is not a winger.

And that wasn't his worst mistake. Rabiot was awful last week, but today he was a starter. He was awful in the first half, but at the beginning of the second half he was still on the pitch. He was on a yellow and he was fouling right and left and he was still on the pitch. Eventually, the ref did what Pirlo should have done. Rabiot is soft and slow-minded, he has no business being in the middle of the pitch. He should be tried on the wings and if can't do it there either, then ciao

Morata, it was only the first match, but he looked like vintage Morata.

Ramsey is a smart player, but he's too limited technically. Should be a backup

@Luca wrote:We really did look a lot better once Arthur and Bentancur came on

But why Bentancur on bench ?

It's as if Inter would bench Barella . It doesn't make sense, he should be  always a starter

@Luca wrote:We really did look a lot better once Arthur and Bentancur came on

But why Bentancur on bench ?

It's as if Inter would bench Barella . It doesn't make sense, he should be  always a starter

I don’t know robes but I’m also not worried. It’s only two games in and both Bentancur and Arthur showed enough today to warrant more time on the field.

Sunday afternoon nap made me miss the match. The highlights i saw give me a good idea about the Rabiot shitshow, can't say it's surprising. Defensively his tackling is very bad, positionning is useless, creativity is average. Can't blame Pirlo experimenting some strategies in his first few matches, as long as he makes the right conclusions. For example it should now be clear to HIM that Rabiot is not Juve starter quality, sub at best. Within next year same date he is gone i bet my shoes on it

But the footage i lack is what followed the red card, Arthur and Bentancur came in and played well ? Was McKennie solid ? He gave me a good impression vs Samp, we lack players of this profile since so long

McKennie was underwhelming, an average game. He was subbed out for Arthur and the team looked much stronger today.

The theme of this season will be finding the right combination in the midfield.

Rabiot was on a great run of games and was good until the Rona goal. He'll still be an important player this season. Should be a sub to Arthur though.

Next match is Napoli, tougher than Roma but at least at home. Then we can have 3 easier matches to figure things out after this tough start.

Genoa announce that 14 members of their match squad, believed to include eight players, tested positive for COVID-19 after the game with Napoli https://t.co/DYJnu4PEOA #Genoa #Napoli #SerieA pic.twitter.com/Ygcs2v2IzP

yep that was the one of those fears that it could go affect so many players at once and they will have to go isolation for a while.

We actually want to sell Skriniar.

ma man vibe! welcome back!
lol - actually i find it really strange that Skriniar is sellable - its just one season and already how quick they gave up on a collosus of a defender.

without skriniar and godin gone - de virj is the only CB, unless u guys get milekovic - perhaps that is the goal but otherwise u guys are left with de ambrosio, kolarov forced to play as CB if something happens to bastoni or de vrij

and there is covid matter to take also, how easily it could take any top player out of the squad. as a rival team i would miss skriniar because every time we played against him he always was at top of his game, and i really want us to beat him - thats how good he has been

Today at 10:49 pm by BarcaLearning