yea why so long

Because the players need to prepare to play again obviously, if they did it when people wanted then the product would likely suck for the same reason pre season and training camp are things which exist.

Plus not everything is done yet, they need clearance from the state and other things.

Yeah they may have it planned out, but there is a massive gap between having it planned and it taking place. That gap being "doing it".

Grateful that this year won't go to waste for the Bucks. We aren't good enough consistently (or really ever) to have an opportunity like this go to waste.

And better yet, if we flop, we can just blame it on coronavirus and the break!

I feel a certain way about our season just being ended like that. We could have won a game, maybe 2, in a 8 game play in format

cant believe these ball players are making a fuss about returning to play. bunch of divas. LITERALLY every other sport is returning without much fuss.

@El Gunner wrote:cant believe these ball players are making a fuss about returning to play. bunch of divas. LITERALLY every other sport is returning without much fuss.

Baseball, which is the biggest sport in America that is currently in season, certainly isnt returning.

In fact I dont think they will play at all this season...or even next.

But what about golf and nascar and ufc being in action atm as we speak, havent heard them making a fuss??

@El Gunner wrote:cant believe these ball players are making a fuss about returning to play. bunch of divas. LITERALLY every other sport is returning without much fuss.

USA is reopening without having beat the virus. The NBA is due to resume in Florida where the number of new daily cases is trending upwards, I think yesterday was their highest daily increase, 1900 new confirmed cases. I can totally understand if some players are questioning the season resumption plan in these circumstances.

But what about golf and nascar and ufc being in action atm as we speak, havent heard them making a fuss??

They cant agree to any games paid or even a schedule. They are also most likely about to enter a strike next season. The strike in the 90s led to them pretty much falling out of relevance to a generation. It happening again might cement them to 3rd tier status.

- Hockey is coming back in Las Vegas in july lol. So far so good

- NBA (and MLS) will resume their season in Orlando, supposedly they have everything needed. But there is one big problem, last week in Florida +8000 cases. If the curve don't flatten within the next 2 weeks i don't see it happening. Would be a blessing in disguise for NBA players.

- Baseball is stuck in contractual issues, players and owners don't agree how many games to play etc.
162 games was always ridiculous, then try to split the contracts into 50 games

The season is in danger if not screwed already.

- Not sure about NFL it's the major league i follow the least. Video games are cool tho


No way Basketball comes back there.

Jokic tested positive and Bradley (Lakers) opts out of the restart.

they might as well just cancel the season, the eventual winner will have a huuuuge asterisk beside their name

Eh I'd rather wait to see what happens before proclaiming that. Ain't no asterisk for Bradley and Bertans.

Although all teams will be obviously in a different shape, but that affects all teams equally sooooo

i believe more players will drop out, and it's not just shape and fitness, obviously because of the virus and the political atmosphere, a lot of players won't be 100% mentally.

@El Gunner wrote:i believe more players will drop out, and it's not just shape and fitness, obviously because of the virus and the political atmosphere, a lot of players won't be 100% mentally.

And they will be separated from their families for up to 3 months, playing basketball to empty stadium. That can't bring the best out of them.

This is the meal given to NBA players in Orlando

I got better treatment by Cuba Air in economic class 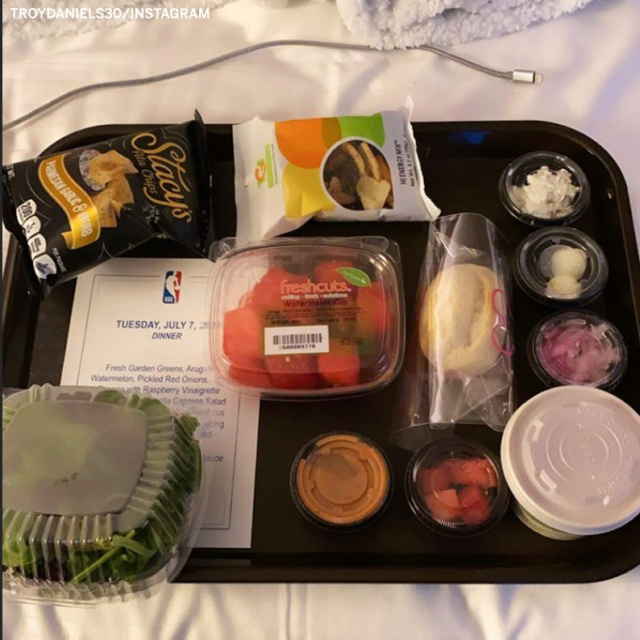 ^^im sure that's misinformation, because just the other day i heard they said they'll treat them full buffet style and make it as luxurious as possible for them.

Apprently the players can order from restaurants

Still i found it funny by NBA/Disney, they convince millionaire athletes to attend a tournament and they serve some cafeteria food

After a brief search on twitter there is a second plate... looks yummy 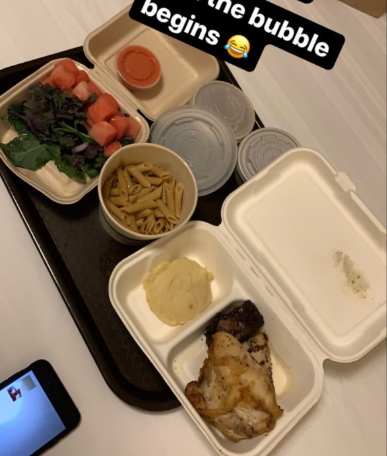 Makes sense, but doesn't make them a contender.

I'm actually watching a scrimmage, what a world.

i just had a thought, i don't know if it's possible cap wise, but Warriors could flip their next two draft picks to get Al Horford out of his Philly mess. Philly are never afraid of being hungry in the draft.

Horford is trash now, you do not want that.