Culers, the world record for attendance at a women's football match is ours! pic.twitter.com/Hu94A9PXDO

Madrid put up a better fight than I thought. Still got thumped, but it wasn't as one-sided as expected.

Can be watched for free here if anyone's interested - https://www.youtube.com/watch?v=WVvH2sPaMmo

Its great that CL games are available for free on YT. I watched the entire el clasico today, was a great game actually and some of these players are amazing. Also expected more of a one-sided game but it looked like could go either way until minute 50 and then Barca shifted 2 gears up and scored 3 goals in quick succession

Fantastic to see 90k+ attendance in a women's game.

This PSG attack is quite scary. Some really powerful black women

Yup, the quality of these games has been a sight to see.

The PSG-Bayern game is a good one right now. PSG are clear favorites with their attacking ability, but Bayern are hitting them effectively on the counter. Great match so far.

And I got a full slate of NWSL Challenge Cup matches to watch later tonight. Good day for the women's game.

#8 for PSG is so good. Her technique is sublime 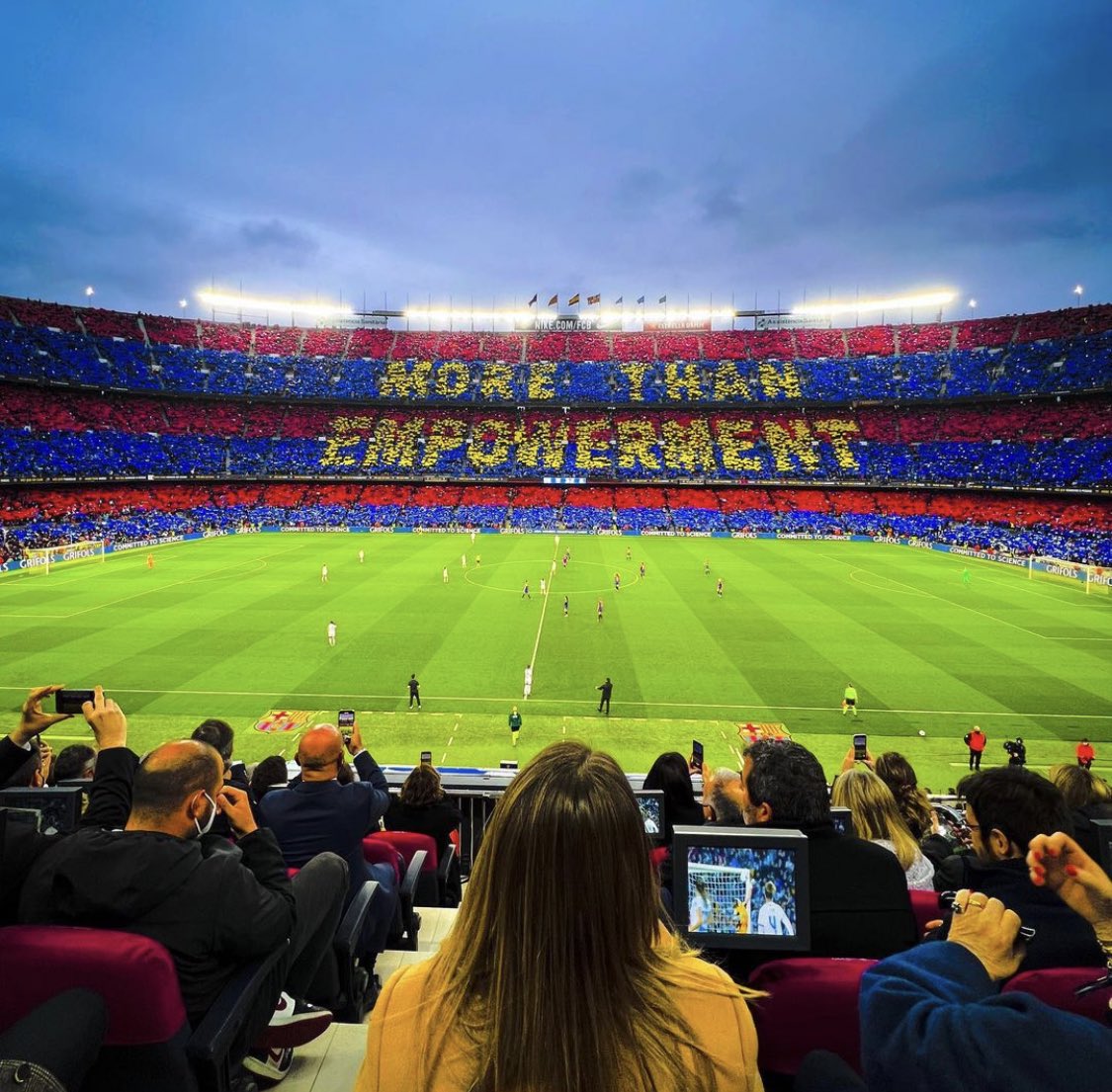 Frankly, Bayern have outplayed PSG for long stretches of this match. They've been excellent on the counter and have really put significant pressure on that PSG backline, forcing a ton of errors to create chances. Saki Kumagai has been excellent at the back and a threat on set pieces, which is why she has Bayern's goal. Their keeper, Leitzig, has made some great saves too. And they have a truly dire situation on their bench.  Covid and injuries have left them with only 4 players on the bench, 2 of them are keepers and all of them are under 20. This Bayern in general has been decimated. Half the starters today are regularly bench players. And yet they've taken a very stacked PSG side into ET in their own stadium. WOW.

As for PSG, they've been uncharasteristically off today. No verve or dynamism. It's all been a bit tepid. Their star front line has been pretty subdued, particularly superstars Marie-Antoinette Katoto and Kadidiatou Diani. Grace Geyoro has been overrun in midfield as well. Ashley Lawrence has been struggling with Klara Buehl and Lineth Beerensteyn for most of the match as well outwide. Their brightest player has probably been Sandy Baltimore, who has their goal.

This is going to be a game of attrition. If Bayern can make it to penalties without conceding that would be a feat in itself.

PSG simply have a very very good bench that they're beginning to call on.

Feel like bayern deserved it more on the day but Bachmann made for a great substitution for PSG. I was rooting for them all game so I'm happy but thoroughly impressed with Bayern, they controlled the midfield completely

both quarter-finals today were very high quality displays. I haven't been consistent in following women's football but seems like the quality overall has gone up rapidly. The worst part was the refereeing

Yeah Bayern played with a lot of heart today. They are not quite at the level of Lyon, Barca, and Wolfsburg, but they're gaining rapidly. This was a seriously impressive effort given the circumstances. With more options, PSG would be out.

PSG are going to need to fix the issues on display today or they will get embarrassed by the likes of Lyon or Barca and maybe Wolfsburg, if they manage to get by a really good Juve side.

Barca clear favorites this year though.

Honestly I believe that Bayern were the better team in both matches, depite PSG's impressive individual quality. PSG played rather poorly and created little, already in the first leg which was rather a smash and grab kind of win. But they are experienced.

Bayern were without 12 players yesterday due to Covid, just 15 players in the match day squad, of the 4 players on the bench two were goalies

Still, they didn't deserve to go out, had PSG on the ropes in the last 10 minutes of normal time and HAD to close the game then, seeing how knackered they were and how strong PSGs bench is (and turned out to be)

Gutted that they didn't go through, but they were really great.
The atmosphere in Paris was amazing, 27000 apparently a record.
Last week 12000 came to the Allianz Arena.

And yes, in international breaks I'm now at the point where I'd watch Bayern women over the German NT any day any time

Wolfsburg took care of business against Arsenal, they go through to the semis 3-1 on aggregate.

Tabea Wassmuth has had some season so far. She's probably the more in-form striker of the sides that have made it this far. Being able to bring Alex Popp off the bench is a a luxury as well.

Arsenal were in a similar situation as Bayern, only able to call up 4 subs. That said, this was still a strong side, but they haven't looked up for it at all in Europe. Personally I just don't like the tactics of their coach. Works well in the WSL, but he's getting found out everytime in Europe.

So the semi-finalists are: Barcelona, Wolfsburg, Lyon and PSG.

TICKETS FOR @FCBfemeni - WOLFSBURG AT CAMP NOU ARE SOLD OUT pic.twitter.com/1hrmjx3we8

That should put to bed the " it was El Clasico" excuse for thinking this was a fluke.

Ada Hegerberg scoring a hat trick on her return to the Norwegian National team is a vibe.

Barca dominating Wolfsburg in front of a sold out Camp Nou.

Wolfsburg haven't gotten out of their halve in roughly 15 minutes or so, I reckon.

Wolfsburg playing such a high line is absolutely suicidal. The predictable happened in that first half.

They need to do what Inter did against the men's side. Go compact, defend doggedly and hit them on the counter effectively. Deny Barca passing lanes and space.

This barca team is so far ahead of competition it's crazy. It's like watching aliens play against pitiful earthlings.

So Wolfsburg tried to make a comeback in that 2nd leg, but the gap was too far. They beat Barca 2-0, but Barca advance on 5-3 aggregate. This was the Wolfsburg that needed to show up at the Camp Nou: Aggressive, confident and dogged in playing their game. For Barca, they looked really complacent and not up to speed. I wouldn't worry too much though. They played like they didn't want to expend a lot of energy as they knew they did enough in the 1st leg to advance.

PSG gave Lyon a good game and came within a goal of forcing ET, but Lyon pulled away with a brace from Ada Hegerberg and a header from Wendie Renard. PSG biggest problem was defending Lyon on crosses and on set pieces. Lyon were utterly dominant there. This was an overall better performance from PSG though. They bypassed Lyon's strong midfield and attacked well down the flanks, particularly through Diani, who caused a significant amount of issues, one of which resulted in a goal for Marie-Antoinette Katoto. Just wasn't enough though.

So OL will meet Barca in the Final. It's the final everyone's wanted for sometime now.

It's going to be a very fun match.

Super late here, but I watched the Women's CL final yesterday between OL and Barca and it was indeed a lot of fun, particulary for OL. Barca chose the biggest game of their season not to show up and they got thoroughly outplayed as a result. OL ran out 3-1 winners.

This OL team looked imperious. Aggressive, confident and so assured. They just looked comfortable in all facets of this game, even when Barca got a goal back. The big names (Ada Hegerberg, Amandine Henry, Wendie Renard, Christiane Endler, Melvine Malard, Delphine Cascarino, Lindsey Horan and Cat Macario) all showed up and showed out. Ellie Carpenter and Amel Majiri are 2 big names as well, though the former came off with a bad injury and the latter is out due to pregnancy. A new name emerged as a future star as well - Selma Bacha, who single-handledly limited the influence of Alexia Putellas. One to watch for sure. Amandine Henry scored what should be a Puskas contender and Cat Macario became the first US international to both play and score in a UWCL final. And yet she received only 7 minutes of total play time for the US at the Tokyo Olympics, a major reason why they finished with a Bronze medal. This OL side are just stacked both with seasoned veterans and a new generations who are going to continue this dominance.

As for Barca, losing Jenni Hermoso so early was a blow they just couldn't recover from. They needed big games from Asisat Oshoala and Caroline Graham Hansen, but didn't get them. The former's finishing deserted her and the latter was overrun completely. Maria Leon defended extremely well at the back, but everyone else around her just couldn't cope with OL's movement. They're still an extremely talented team and will be very hard to beat, but they need a rival in domestic play to push them like PSG and Paris FC have pushed Lyon. Real Madrid will be that team at some point, but I doubt it will be next season, even though they have qualified for next season's compettion. It's going to take at least another 2 imo.

There's also the notion that the likes of Arsenal and Chelsea in the WSL, Juventus in Serie A, and Wolfsburg and Bayern in the Frauen Bundesliga will be an ever present threat.

Too bad I can't bring myself to care about Women's football, I'd be a very happy and satisfied fan if I did.

A shame honestly. I find it very entertaining.

The key is to stop comparing it to the men's game. That takes a lot of work. When I stopped trying to find male-equivalent parallels, I found the women's game much easier to immerse myself in than I had before.

Page 5 of 5
Permissions in this forum:
You cannot reply to topics in this forum
Latest topics
» The Official Comicbook Movies Thread: Part 3

Yesterday at 6:19 pm by RealGunner

Yesterday at 5:07 pm by Robespierre

Yesterday at 4:10 pm by futbol_bill

Yesterday at 3:38 pm by futbol_bill

Yesterday at 2:54 pm by Warrior