unbelievable we do not have a thread for this unbelievable young player, and that's with the whole forum full of Americans or people living in the States?

Have previous disappointments with hyped US talents dulled the capacity for soccer-related enthusiasm of this great nation, the greatest country on God's earth? Have countless years of having to suffer Jürgen Klinsmann left nothing but disillusionment and fatigue?

There's no need for caution with this kid, he is the real deal. A proper US top player in the making.

Will make a proper introduction post about this wonderful youngster at some point but right now we at least need a thread.

never mind that, gotze's back and fit? ffs

Hope those issues he had are behind him for good

Pulisic, one goal one assist

We need to talk about the pronunciation of his name though.
It's not okay what's going on.

Croatian heritage, but I think he pronounces it the Americanised way himself. I pronounce the first name in English and last name with the Croatian pronunciation.

will go to PSG to that Nike can have south america, north america, france and italy in the same team. Just missing Delle All for the all Nike team

Pulisic, one goal one assist

We need to talk about the pronunciation of his name though.
It's not okay what's going on.

That's how all people of ex-Yugoslav descent pronounce their last names in English-speaking countries.

Great great humility and attitude. Great family too. Gonna be a smashing player.
Hope he realizes his dream move soon.

There's really not that many Americans on here tbh

Either way he's a *bleep* incredible talent. He's already having more success in Europe than any American player ever not named Dempsey (and tbh, that was at Fulham) and he's only a teenager. He was Dortmund's best player against Tottenham (is he one of their better players in general?)

Barring a career ending injury of any sort, he'll go down as the best ever American player easily. Honestly from what I've seen of him, he looks like he'll be one of the best around for a while too as long as he develops right. He has the talent to be a big name for years to come.

Extremely exciting from a US point of view because we've never had one of these yet. If he becomes as good as he can be, it will be huge for US football--viewership, interest and excitement. US likes to be the best at things and having a player who is a legitimate name in football will do big things here in the states.

What strikes about him most for me is his grounded personality. The kid comes around soft spoken, humble and hard working. The hype around him right now is simply insane and when a whole country is rooting for you, it can easily get to your head. But he seems so calm and genuine.
Actually reminds me of Rashford in a way and may be Mbappe too. Because of this particular quality, chances of these players making it big are more I reckon. 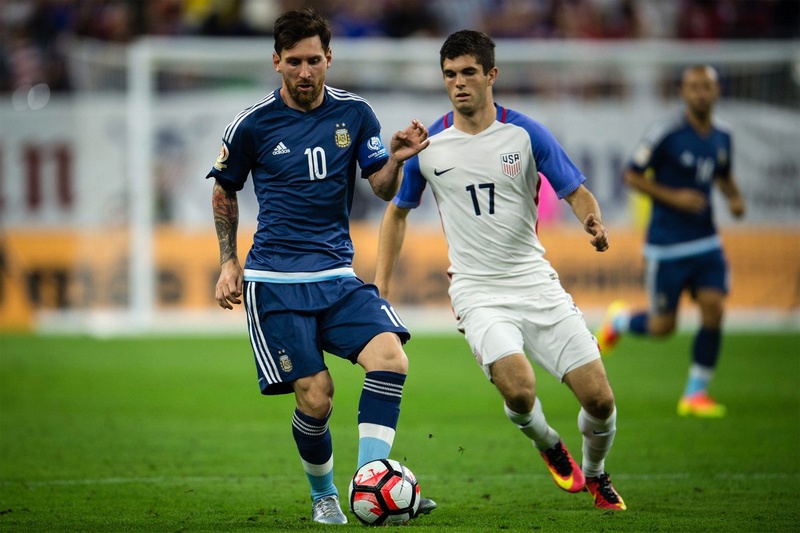 Only one showed up for a world cup qualifier this week

he is pretty damn good this kid, and whichever team signs him (i bet a Nike team) will eat marketing gold in the USA, specially if he succeeds

That USA marketing part is where my and a million other United fans's hopes are pinned. (inb4 some typical mocking comment by Hans

If arguably the biggest club in terms of popularity in the US that has US owners can't get a star US prodigy who has grown up as an United fan, then well..

For his career tho, with Jose in charge, may be he should go somewhere else. But would like him more than someone like Griezmann any day tbh.

I'm with the tabloids on this one: I think people like Hoeness and KHR don't want Tuchel at Bayern, he thinks too much for himself.

He's awesome for us. Don't think we've had a player this good talent wise. Not even Dempsey or Donovan, though both players are good.

what do you mean us? you are Algerian dude, got whooped today by cameroon

Mr Nick09 wrote:what do you mean us? you are Algerian dude, got whooped today by cameroon

Oh I see, even though my mom is Algerian and my dad is morrocan and I was born in the US, I "have" to pick a side. I'll play by my own rules.

Algerian NT is in freefall. I gave up on them when gourcuff left. The team needs an overhaul and is filled with primadonas and terrible coaching.

Even today, we played you guys with guys who have never played a game together. The team is experimenting and going in the right direction but its gonna take more then that to get us out of the shithole we're in.

when you have a generation of Mahrez, Goulham, Brahimi, Slimani, Ounas etc..., but you are experimenting and not even going to the WC

Those players don't give it their all, so maybe if they gave a shit we'd be qualified but as it stands we suck.

I wish we played the paradou kids and players who gave it their all, not these overrated primadonas who can't get over the fact gourcuff is gone.
I don't understand why you're still talking buddy, I gave you the read up on why lol, so try sticking on topic.

A once in a generation player, I'd say. Surely the best club player we've ever produced. I still think he has a ways to go with USA though, as that's a completely different beast from Dortmund.

Panama hacked him up most of that game to the point of him having to be subbed, but he was nigh on unplayable so I can understand that. Mentally, he's already mature enough not to let games like that get to him I think. Just needs to be there physically too.

Pulisic's ceiling is endless and I think we all know he can do great things with Dortmund, but I really need to see him in a pressure cooker game for USA. This Panama one was nice, but let's be honest....it was no Algeria from 7 years ago, which was absolutely make or break. Let's see what he can do against a top team at the WC. Cautiously optimistic.

I just don't see top talent in this guy. He's very mature in his decision making but his skill is decent, nothing more. His raw ability doesn't stand out

What do you mean raw talent. That literally makes no sense unless you explain it.

Page 1 of 4
Permissions in this forum:
You cannot reply to topics in this forum
Latest topics
» The Official Netflix, Disney+, Amazon and HBO Max Thread