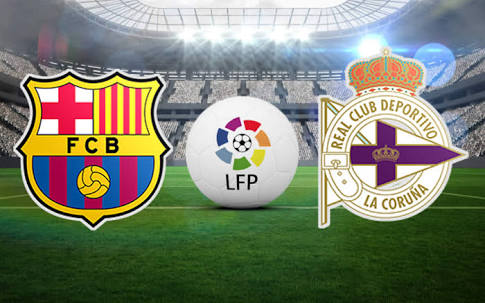 TEAM NEWS
Jasper Cillessen, Jordi Alba and Sergi Roberto reported back from World Cup qualifying duty with injuries. Leo Messi, Samuel Umtiti and Ivan Rakitic all three have made good progress and could even be included in the squad.

Lucho:  “Looking at our league position, we need to recover points" he said. "And this game comes right after the internationals. We have only had two days to prepare for the game and Depor have had two weeks, although I’m not going to use that as an excuse.”
The Barca coach was also asked about Messi's chances of appearing on Saturday, but “I’ll speak with him and then decide” was all he was able to say on that matter.

Garitano: “In a game like this we have to play our very best, and hope that they don’t have their day and we get a little bit of luck. You need all three of those things and the only one we can do anything about is the first. For the rest, we’re at the mercy of what they can do and of fortune too.”

The visitors gave Deportivo the mauling of the season, as Luis Suarez put on the best display of his career, scoring four goals and assisting another three in a memorable rout that moved the Blaugrana one win closer to the title.

Will miss the game again.

I hope Messi comes on for a couple of minutes.

This is a must win.

Vidal not called in Barca squad

probably to come off the bench.

it's confirmed digne will play rightback???

i think its going to be more of a 3 in the back digne LM rafinha RM being wingbacks in defense.

either way too much yolo from enrique he has to stop the drastic rotations.
anyways messi to save us when he comes in.. ima go to a bar to watch the game so will post when i get back

Neymar 9 assists already this season. 2 in the game. Messi what a comeback. Barca march on...

Seemed like it was a great game, it's a shame i had to miss it.

I saw all of Alcacer's misses, it's getting ridiculous now.

Rafinha, what a signing. 4 goals in just 4 games.

"Alcacer, the poacher who couldn't poach."
The story that moved Spielberg.

Suarez has been off for some games now.. Now messi is back, I expect him to be ready for man city as normal service resumes.
We need to teach city a lesson. Expecting a 4-1 win..