As it is expected that Olympique Lyonnais will advance to the CL final after beating PSG 7:0 in the semi final first leg, this means that at least one Norwegian player will lift the CL trophy ^^

I suppose I shouldn't be surprised, considering OL have a goal machine in Ada Hegerberg

Ada Hegerberg indeed scored twice in the steamrolling of Paris ^^ Tonight's the second leg of PSG vs OL, btw (just kicked off).

I'm looking forward to watching the final between Wolfsburg and Lyon! I'm sure it will be a tense match again (they met before in the final of 2013 where Wolfsburg took the trophy with a 1:0 win).

Talking about finals - title holders VfL Wolfsburg won the DFB-Pokal final against SC Sand today.  It's their 3rd DFB-Pokal win after 2013 and 2015.

The Bundesliga was won by title holders Bayern München with VfL Wolfsburg as runners-up. 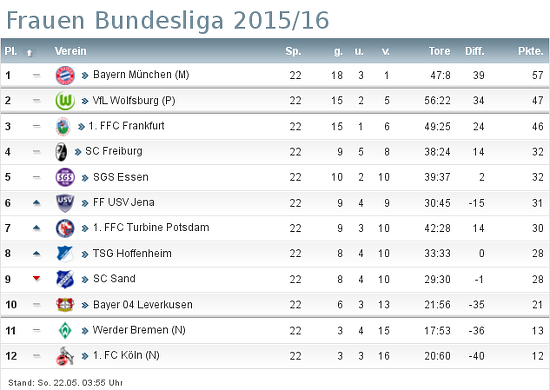 This means that 1.FFC Frankfurt will miss out on CL football next season, while 1.FC Köln and Werder Bremen get relegated.

Next season Borussia Mönchengladbach and MSV Duisburg will be promoted to the Bundesliga. MSV Duisburg won the 2nd Bundesliga Nord with 22 clean wins and thus the full 66 points in 22 matchdays, which means they got the absolute 2nd League record in women Bundesliga history.

Does that indicate that Bayern allowed only 8 goals all season?

Yup. A good goalie + defense is never a bad thing to have.

BTW, MSV Duisburg only allowed 14 goals when winning the 2nd BL, which isn't so bad either. They managed to score vastly more goals, though with 75 ^^ 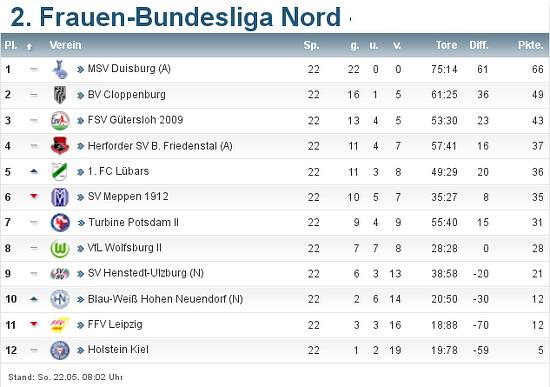 17 year old football player, Andrea Norheim has signed for Olympique Lyon! Her fellow Norwegian team mate, Ada Hegerberg will help her ease into her new surroundings and in teaching her the French language

We seem to have a great generation of female football players coming up.

I predict that 17 year old, Emilie Nautnes will also make her breakthrough soon. She's already playing for our U17 team

Oh, by the way - I forgot to mention that the Women's CL 2016 was won by Olympique Lyon who prevailed in a penalty shootout against VfL Wolfsburg.

rwo power wrote:Oh, by the way - I forgot to mention that the Women's CL 2016 was won by Olympique Lyon who prevailed in a penalty shootout against VfL Wolfsburg.

Yep, I read the match summary

I'll try and watch more of OL's games in the upcoming season.

Well, OL have a really good squad! I watched the CL final and it was really tense. My main problem was that I had an infection and high fever, so I don't really remember much of the game -_-'

By the way - the Swiss Nati managed to qualify for their first ever Euro in 2017 with two matches to spare!

Yesterday at 4:11 pm by Myesyats

Yesterday at 2:24 pm by halamadrid2

Yesterday at 1:04 pm by Myesyats