Tourney starts in less than a week. Here are the groups:
It's in OSTRAYA !!!!!

Some facts and notes:

** After poor showing of Asian nations in the WC, the importance of this tournament for continent's heavy weights has massively gone up

** Qatar seemed to have had the best preparation plans of all teams, playing 15 friendly matches against international sides in the last 4 months

** Two of continent's top 4 traditional power houses, South Korea and Iran, have not won the Asian cup for over 30 years.

**From top of my head, Japan/Korea/Saudi/Bahrain/and I believe Jordan have all new managers than what they had 7 months ago. Which shows the massive lack of managerial stability in Asian football.


Games are in Australia, which means nasty watching time for those in North America. But should be a good atmosphere and I think Australia will be a great host and they are favourites for the cup. Can't see Japan winning it AGAIN. Asian teams are getting very closer to each other every year and I wouldn't be surprised at some dirty surprises at all.

Japan has a much better team than Australia on paper.

Yeah Japan will walk this. Japan and Iran in the finals. S. Korea finishing third.

Don't follow Asian football much (barely any) these days, but I think Oman has made tremendous strides in last few years.

Saudi Arabia is possibly the most regressed team over last two decades. Others are notoriously inconsistent and underachievers.

If Iran can repeat their WC form, drive and discpline; they will be favorite. Bahrain is another team that quietly progressed over last few years.

The later three have all developed substantially in last few years.

rooting for Japan and Iran

North Korea's going to win this.

Tim Cahill is aiming to play in the 2018 WC, so it may not be his last Tournament.

Should be good. I'll try watch a few games.

them timing of games for me 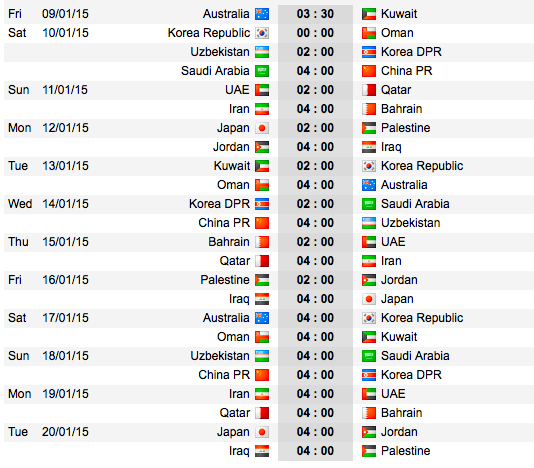 That's pretty much the times we Aussies have to wake up to watch the Premier League.

them timing of games for me

That's pretty much the times we Aussies have to wake up to watch the Premier League.

Back on topic, Asian cup starts tonight Australian time with the host nation playing against Kuwait.

UAE and Iran are the favorites for Group C imo, though we did win the Gulf Cup. South Korea, Japan, Oman and Australia are the only other sides from the other groups that i feel we can't take down.

That was a good game in the end after a pretty ordinary start. Massimo Luongo was excellent.

Honestly the first impressive game under Ange. If this is what we'll see from him, we can maybe challenge Japan for best team in Asia.

More than that by the looks of it

More than that by the looks of it


I really hope people turn up for non-Australia games and Iwould be interested to know what the attendance is like for those games.

the S.Korean v Oman game had a really good crowd, quite loud aswell

. Was really surprised since it was raining.