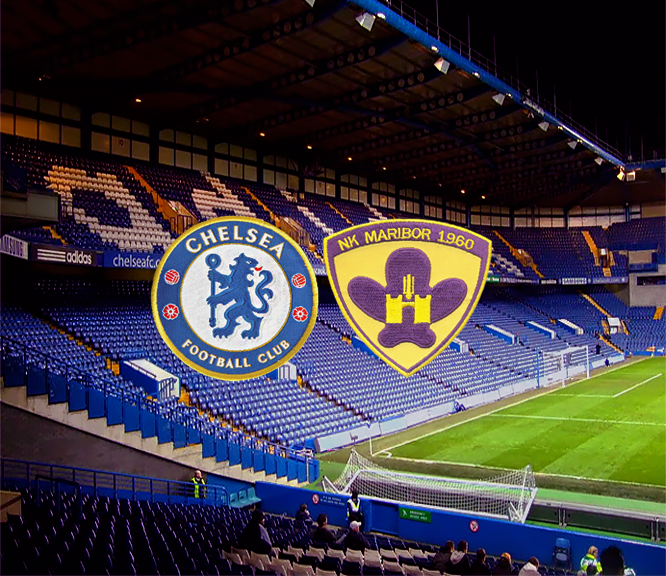 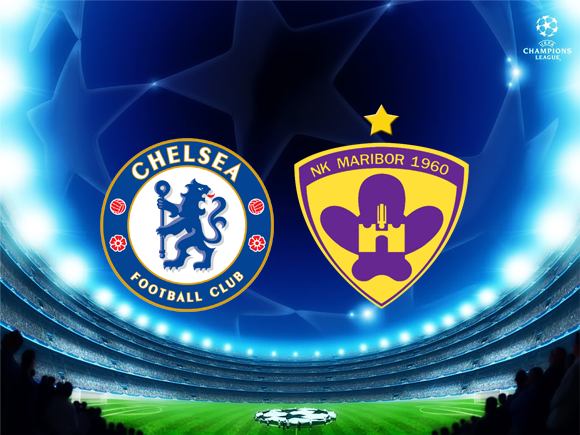 The third matchweek of the Champions League group stage sees Chelsea play host to Slovenian champions Maribor at Stamford Bridge. The clash represents the first of 2 back-to-back games the sides will contest against each other in Matchweeks 3 and 4, a set that could well prove to be make or break for either.
-

The sides were involved in 2 low-scoring affairs the matchweek previous in Portugal and Germany respectively. The Blues overcame capital club Sporting in Lisbon courtesy of a 34th minute header from former Benfica man Nemanja Matic sandwiched in between José Mourinho's men missing scores of gilt-edged sitters literally from the first minute to the last to put the game firmly in their grasp, while Maribor earned a respectable and indeed unexpected 1-1 draw away to Schalke, having achieved the same scoreline in their Matchweek 1 fixture at home to Sporting.

As a result, the two sides find themselves first and second in Group G heading into this 3rd week of play. The Blues have a firm grasp on the group and will know a result here will only tighten that grip going into the second half of this stage of the competition, while Maribor, finding themselves unexpectedly though none the less deservedly just behind them in second, may well be starting to believe an upset could be on the cards should they continue the fine form they've produced thus far. 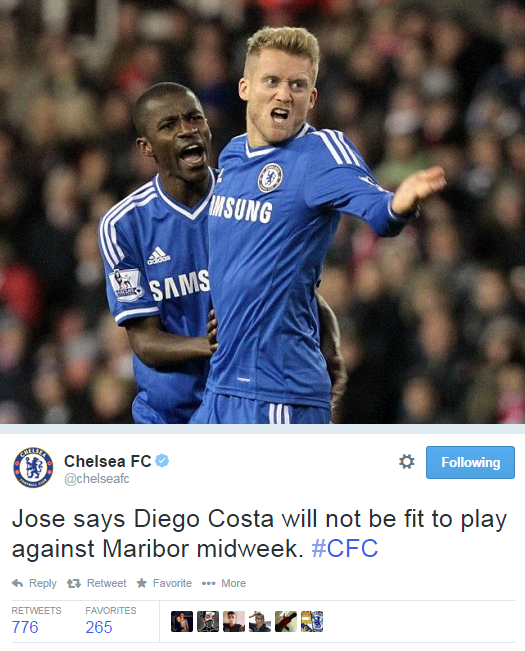 Injured for the Blues will likely be Diego Costa, José Mourinho confirmed after his side's 2-1 victory over Crystal Palace at the weekend, while winger Andre Schurrle and midfielder Ramires also look likely to be unavailable.
- 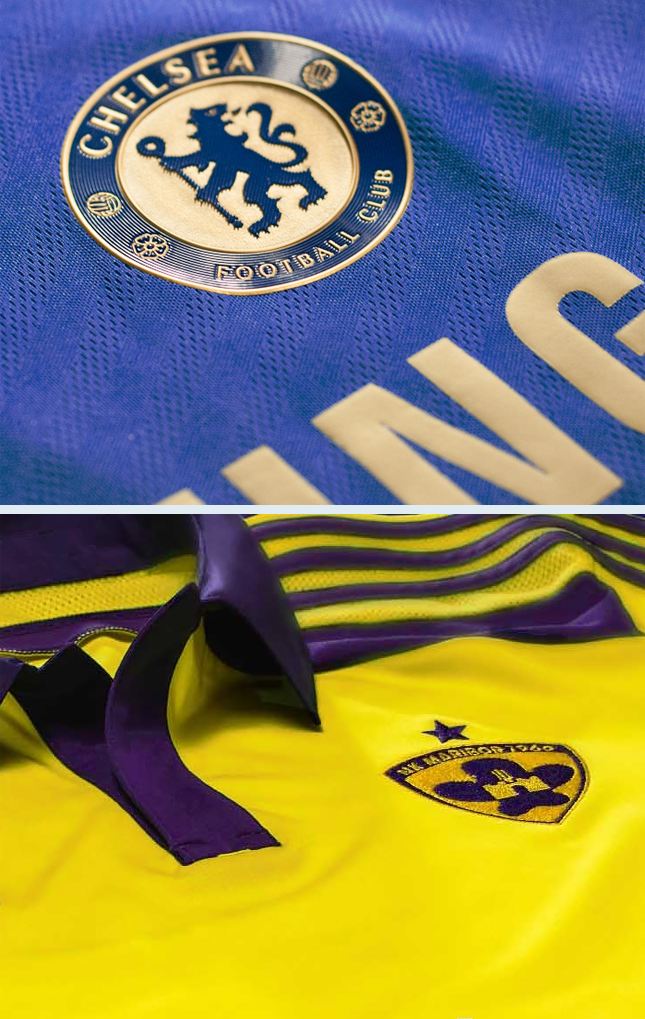 A very good chance to put daylight between us and the others.

I think if we win the next two games, we'll basically assure a knockout place.

Remy will be fine up top.

Courtois
Ivanovic Zouma Terry Luis
Fabregas Mikel
Willian Oscar Hazard
Remy
Get some rotation in there and take off Oscar or Hazard early in the second half. Perhaps Cesc, too, if we're winning.

Biggest shame about Azpi is that I think Luis would have started this game to give him a rest for United at the weekend. Now, Luis is gonna have to play twice. But oh well - he's more than capable.


As for up top, I'm just hoping José doesn't make the same idiotic mistake for this match as he did against Schalke in underestimating the opponent and starting Drogba. Would be lunacy, especially considering how badly his first time trying it failed.

Actually, Dave will probably play since he can. Luis will get a rest for the weekend, imo.

But even still. I think Luis would have played so Azpi would have had a full week's rest for United. Filipe will be walking out at Old Trafford having not started since, what, Bolton?

Yeah, oh well. I am not too worried about Luis playing, he is quality, time for him to show it.

Agreed. Anyway. back to the game at hand. As you said, 2 wins against these in the 2 back-to-back games and we're effectively there.

Very much so, regardless of the Schalke v Sporting results.

José Mourinho promises to field strongest Chelsea side against Champions League minnows Maribor:
The Blues are heavy favourites against the Slovenians at Stamford Bridge Tuesday, but boss José Mourinho says he is not taking anything for granted come tomorrow evening
http://www.mirror.co.uk/sport/football/news/jose-mourinho-promises-field-strongest-4466156

"They have two points. They are unbeaten in the Champions League."

"I think in this moment people will have thought they would have zero points but they got one point against Sporting and they went to Germany and they got exactly the same result as we got against Schalke, only ours was at Stamford Bridge."

"So they come to Stamford Bridge for another result."

"We need the three points. I'm going to play with the strongest possible team, trying to get the points, respecting them."

"I have studied them already, because I had these 15 days without football. I had time already to study them, so now I'm ready to start with my players preparing a difficult game."

I can't imagine it'll be entirely full strength, but it won't be full of youth players.

As I said earlier in the thread, hopefully he'll have learned from our last home match in the CL that underestimating the opponent is asking for trouble.

Mourinho not thinking about United as Maribor tie beckons:
José Mourinho says he is not thinking about his side's clash against Manchester United at Old Trafford at the weekend with the Blues set to face Maribor in the Champions League this evening, and that he'll not be resting players in the latter for the former
http://www.london24.com/sport/football/clubs/chelsea/jose_mourinho_talks_up_biggest_week_in_chelsea_s_season_so_far_1_3813826

“I don’t have Man United in mind. I have Maribor in mind.”

“I don’t rest players. We must play with what we have, with the best we have.”

“We are not going to concede any favour by resting people or changing the team, no way.”

"I personally was hoping that he played, because I like the challenge."

"Somebody else will come, maybe equally as good. It won't help us at all."

Maribor boss Šimundža: we want to win, but we're pragmatic:
Maribor manager Ante Šimundža says his side's mentality is to win and play positively, but that they won't be too idealistic against Chelsea at Stamford Bridge this evening
http://www.dailystar.co.uk/sport/football/406067/Maribor-Marko-Suler-Chelsea-Diego-Costa-s-injury-Champions-League

"Our mentality is to win, to play offensively."

"We always try to go for a win, but we will certainly not be pushing very, very hard from the beginning without thinking in this match."

Solanke again on the bench

Luis starting as well is interesting.


As I said a few days ago, walking out at Old Trafford for your first start in a month is not an ideal situation. No real surprise José wants him to get some minutes under his belt before then.

All am saying is Mou really doesn't like Salah.

And just like that, we're down to 1 striker. Brilliant.

Sporting take the lead in Germany.