Roy Hodgson and Brendan Rodgers remain at loggerheads after the England manager revealed he would still not countenance the two-day post-match recovery time demanded by Rodgers for his striker Daniel Sturridge.

Hodgson...I'm lost for words for this disgrace of a human being. I won't go on more to risk a ban. wow....

WOW wtf is this shit, when will this clown get fired FFS.

I hope peace of shit Woy gets prideful and never calls Daniel up again.

KOLOOOOOOOO to start against Madrid imo

Skrtel and Kolo together

Sakho may just come back, I think

Gerrard for CB, as Rodgers foretold

And Can, Sturridge, Allen back?
Hope Sakho becomes fit ffs

It's been over two months now and still no sign of Flanagan. With Johnson out with a groin injury reportedly for the entire festive season, it would have been the perfect opportunity for Flanagan. I guess it's going to be Manquillo getting a run of games - and I haven't been as impressed by him as most of you guys seem to be.

Ive always said Flanagan is the best RB at the club this season, Art.

if you are talking about current form, thats really interesting because i haven seen much of Wisdom lately,...except that fans at WBA like him.

It will be interesting to see when Gleno is not playing and both Manq and Flan are fit, with whom Rodgers will go

I like having Flangan and Enrique in the side. They're both solid defensively. Flanagan even started developing some offensive flair.

I feel like he could bring some character to that backline with his no-nonsense defending.

I've seen West Brom play a few times this season, the latest against West Ham (watched it because of Carroll, not Wisdom, sorry) early in December and Wisdom looks solid... just doesn't offer much anything going forward. The occasional run and all right passing. But I've been more impressed by him than Manquillo, who doesn't offer much going forward and sometimes gets caught out of position defensively. But here's the thing, I don't think Wisdom is a natural full-back. Like so many young CBs - go no further than Martin Kelly, who I also think is a better CB than a full-back - Wisdom is being played at RB while waiting for his chance at CB. That's how I see it, anyway. That Wisdom's best position is CB, it's just easier to get chances as a full-back.

Johnson is out of favour on here, but let me tell you, if we let him go and go into next season with Flanagan, Manquillo and Wisdom as our RBs, we'll be asking in unison for a new RB by Christmas 2015. Unless Flanagan has continued his development, but we don't know about that yet.

Well, we can disagree about Johnson. The sooner he is not playing any more games for Liverpool the better. Would much rather have Flanagan, Manquillo and Wisdom as our RBs than any combination that has Johnson starting more than lower level cup ties.

I don't see a future for Wisdom here. Flanno is our best fullback. Let's hope he's back soon.

I don't see a future for Wisdom here. Flanno is our best fullback. Let's hope he's back soon.

Wisdom and Kelly were pretty much the same. Young CBs who couldn't get chances as CB. I can't say which one is better, but I don't think either has a long Premier League future as full-back. 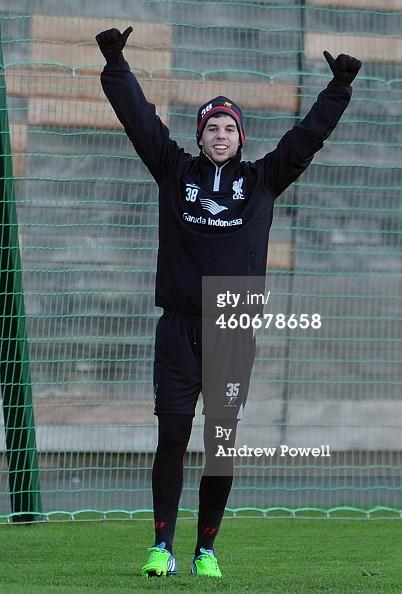 So, Flanno is training, but any idea when he could be fit to play?

But GJ should he back by then so Flafu won't see much game time after that.

But GJ should he back by then so Flafu won't see much game time after that.

Rodgers will just play them together.

BR: He’ll be back in England just after Christmas period. Some stage in January to get Dan back.

Our best player. Our fortunes will definitely change when he comes back. I really have high hopes for Europa League with Daniel playing

Even the semifinal of COC will be interesting and up in the air with Studge back.

Today at 8:39 pm by BarcaLearning

Today at 8:23 pm by The Demon of Carthage

Yesterday at 11:58 pm by BarrileteCosmico

Yesterday at 7:25 pm by silver