It's clear that him and Moyes aren't getting on. He's having injury problems again and SAF has apologized to him, because last summer when he signed, he promised he won't retire at the end of the season.

He's finding Moyes' training methods difficult and blames them for his niggling injuries. Rooney is becoming the opposite of Moyes and has been a lot better this season so far.

Seeing RVP is in 2nd year of his 4 year contract on 200k/week , which clubs do you see going for him if Moyes decides to pull a Fergie and gets rid of the dressing room cancer.

I think Madrid will pay attention to it, or maybe even Chelsea put a surprise bid.

Not to mention RVP doesn't fit Moyes' style of football, so I think United will be better off selling him (both footballing wise and dressing room wise) and replacing him with Benteke.

Won't be surprised if he is "Rested" again this weekend.

PSG could fulfill his ambition

Doubt he going anywhere though.

Peccadillo wrote:PSG could fulfill his ambition

He's going nowhere though. He'll be at United longer than Moyes.

RVP and Cex back at arsenal with Ramsey, Ozil and Wilshere, Cazrola

When will players learn? The grass is not greener on the other side.

ioilersrock448 wrote:When will players learn? The grass is not greener on the other side. 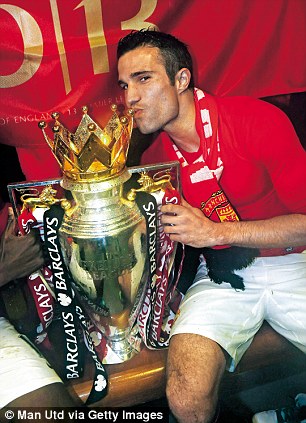 ioilersrock448 wrote:When will players learn? The grass is not greener on the other side.

He wont leave yanited, shouldve joined Chelsea instead though

If RVP's "Bad form" is him scoring more goals than Rooney whilst playing less minutes,Having constant injuries and being unhappy with his current manager,then I don't know what his good form is.

We all know how good Rooney is,But Persie is on another level.United look 10 times more dangerous with him on the field

You sure about that? Seems like a lot of people on here don't rate him very highly

Lex wrote:RVP is about as welcome at Arsenal as Chris Weidman is at Anderson Silva's Christmas party

Wenger would take him back in a heartbeat if he was offered the chance.

The way RVP went from the club. There is more chance of Evra playing for us than him.

Im sure Wenger would rather have Bendtner than Van Persie.

You should go into politics with such astute wit and sharp rhetoric, your genius is being wasted here

Why do you want another 'past it' striker? Aren't Torres, Eto'o enough already?

vivabarca38 wrote:Im sure Wenger would rather have Bendtner than Van Persie.

Can you at least try making sense plz?

Why do you want another 'past it' striker? Aren't Torres, Eto'o enough already?

RVP is so past it that he carried Man Utd to the title last year and carried Arsenal the year before that.

I'd love to know your definition of in their prime if RVP is past it.