We all know those 4 are gonna be in the draw, so let's not play humble pies here (with all due respect to the other teams).

Personally I have been dying to see where Bayern stands against Barca. Will they buck under and lose by big margin like last time the two met, or will Barca be finally be dethroned?

Dortmund vs Barcelona is another tie I would love to see happen.

anyway tell me about ur favourite match up in this season semifinals/finals.

Bayern vs Barca. I don't want to see Real Madrid vs Dortmund again, however it's the only way Bayern/Barca can happen.

Anyway I think any combination will be good.

In terms of the final, I want a Clasico. However again, any combination will be good.

Only Real Madrid and Bayern München are already through.

urbaNRoots wrote:Only Real Madrid and Bayern München are already through.

no one is through

Dont think UEFA wants Bayern-Dortmund, not many outside Germany would watch that.

That would be nice. And then Bayern/Real - Barcelona in the final.

Best from a UEFA fixing stand point would be:

Real Madrid vs Borussia Dortmund
The rematch! Can the exciting and beloved new breed of Dortmund surprise the Madrid Armanda again? Los Blancos have the weight of history and pedigree urging them on to a legendary 10th title but we know that Dortmund can beat them over two legs! The question is, can they do it again and go on to Wembley? Before it was for points, now it's for glory! It's the young guns vs the big boys!

Barcelona vs Bayern Munich
Clash of the titans! The two teams likely to win their league this season, in fact Bayern already has! Barcelona has been on a roll since their historic comeback against AC Milan! But now they come up against a team that might finally be able to keep the ball better than they can! Bayern are desperate for redemption in the Champions League after last season and they have tore through everything thus far but can they beat Barcelona? FCB vs FCB, Bavaria vs Catalonia and a date with Wembley at stake!


For the record I think that there is a chance that these are not the semis. Malaga, PSG, Juve and maybe even Gala still have a chance.

la bestia negra wrote:no one is through

Gala has a chance

the false humulity is getting very boring.

Bayern and Madrid are through and Barca and Dortmund are likely to go through but PSG and Malaga have slim hopes.

As for the question i am bored by Barca and Madrid so any combination of...

the false humulity is getting very boring.

I believe in the magic of football

I don't think you should write off Juve just yet. They might show us something and it wouldn't be the first time Bayern lost from a winning position

Slim hopes? please mate, we are going to fry some cules and eat them with chop sticks. PSG are going through, causing the biggest european upset of the year. all your calculations are wrong because there will be no barca in the next round.

A chart showing the probability of the semi finalists based on betting odds. (It's being assumed that Madrid are through already apparently lol) 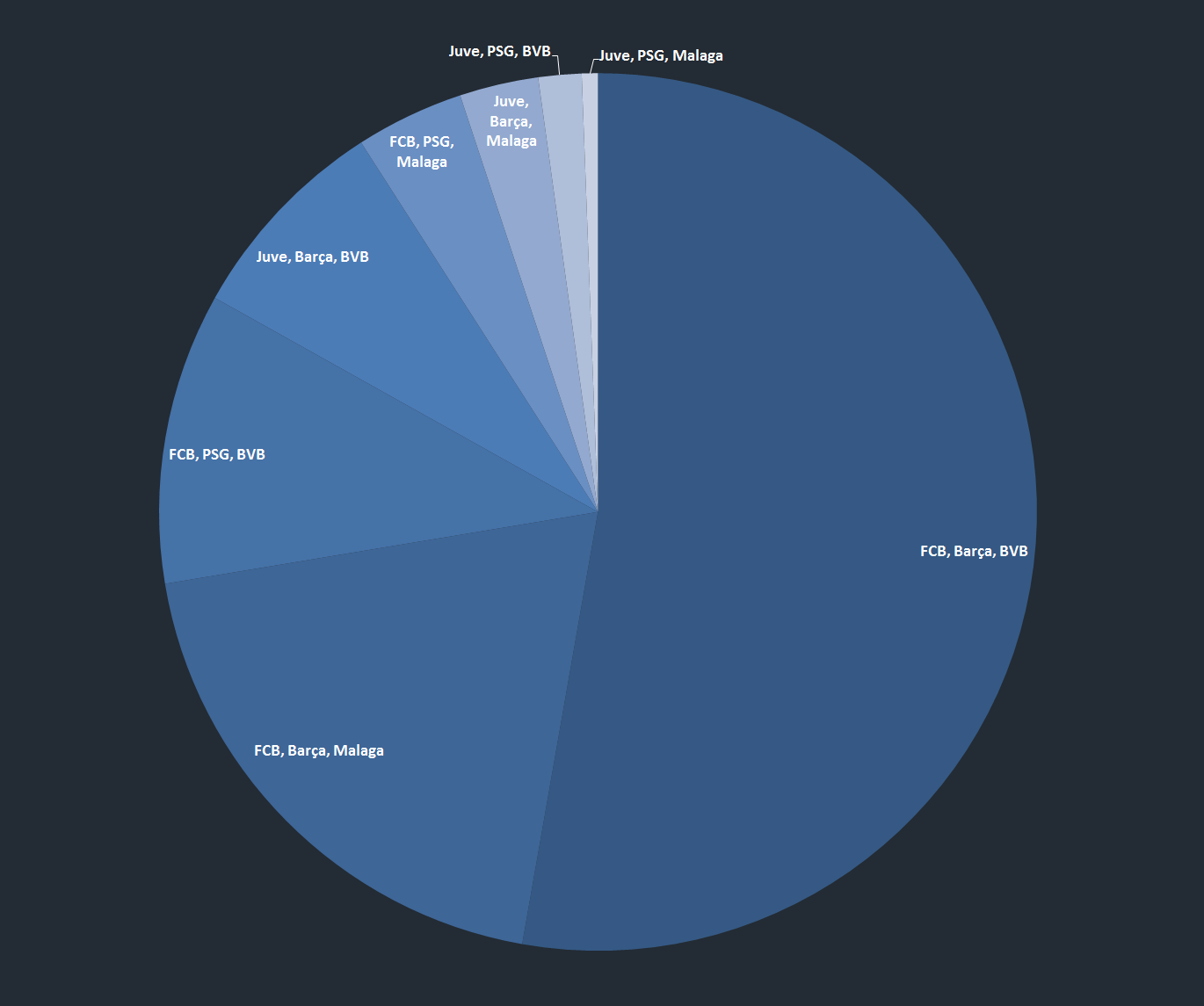 The probability that Real Madrid will make it to the semis apparently is so high that you can't even place a bet on it anymore, so I took Real Madrid as fixed already; for the other teams, the current probabilites of making it are 87.1% for Bayern, 83.1% for Barça, 72.9% for Dortmund, and hence 12.9% for Juventus, 16.9% for PSG and 27.1% for Malaga.

To be quite honest, it's quite likely that we will have a Germany and Turkey final. And, that's exactly what I want.

FCB - BVB = final of my dreams

That will be decided in July when it's FCB vs. FCB playing in honor of the Great Seducer

I want the winner of Barca v PSG for Madrid. Seriously I don't think we can ever face this Barca side at a more better time in CL. And if PSG go through, well that's even a bigger bonus.

I can't see the Italy vs Germany final.

because it's not happening bro.

Similar topics
» Chinese woman defends her nation against Secessionists in Germany
» Predict the World Cup progression/results
» "Spain vs Germany"
» Would Rooney get into Spain and Germany's XI ?
» germany can stop spain