Car accident for Martin Caceres at dawn. A nasty clash for the player Juventus, at the intersection of Via Nizza and course Dante - reported by the website of the newspaper "La Stampa" -. The Uruguayan defender was rushed to the emergency room in code yellow. From the first reconstruction of the accident, the other car involved would not have given priority to the player. Because of the impact the player's car ended up damaging the adjacent subway entrance.

Hope he is ok...will be in my prayers

Juventus defender Martin Caceres is in hospital after a car crash last night in Turin, but is not in serious condition and avoided fractures.

“He arrived in hospital with a cut to the head, which was immediately stitched up, and one to the cheekbone. He did not sustain any fractures,” read a statement from Juventus.

“Caceres will remain in hospital today and should be released tomorrow.”

The Uruguayan was travelling in Turin down Via Nizza at around 3.20am local time on his Porsche Cayenne.

A car coming from Corso Dante sped up as the traffic lights were about to turn red, did not respect right of way and the two vehicles collided.

It’s claimed Caceres and his car were sent flying on to the entrance of the underground station.

The 25-year-old was taken to the trauma unit at the Maria Adelaide hospital in Turin, but his condition is not serious.

Caceres was on the bench in last night’s 2-0 victory at Bologna.

yeah he is alright thank god 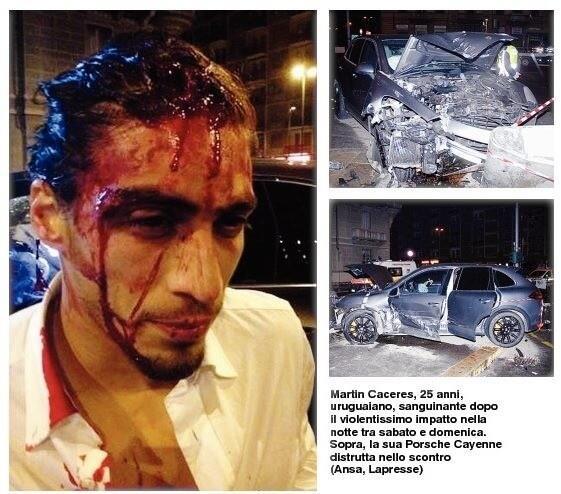 Damn he was a bit of a mess, but he seems to be ok thank God. Get well soon Martin.

Oh my God, i hope he is going to be ok. Thank God he is alive

He'll be back in 15 days .. the doctors recomended 30 but Caceres's strong will and will to work cut the time in half so he is coming back in 15 days

Caceres back in two weeks?


Juventus defender Martin Caceres will be out action for just 15 days after being involved in a car accident at the weekend, according to reports.

The Uruguay international was hospitalised after the crash on Saturday evening and was given stitches to cuts on his face.

He has however, been cleared of any more serious injuries and, according to Calcio News, could be back on the pitch in just two weeks.

The Bianconeri travel to San Siro to play Inter on March 30.

Page 1 of 1
Permissions in this forum:
You cannot reply to topics in this forum
Latest topics
» ¤¤ WORLD CUP 2022: The prediction challenge ¤¤

Yesterday at 9:18 pm by BarcaLearning