After posting all those gangsters photos on facebook, this is the latest that bellend has come up with: 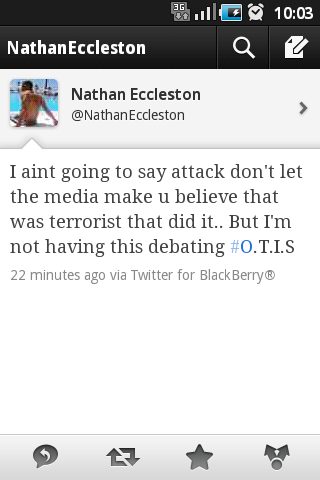 Not to mention, he is a die hard Man U supporter.

Can't we release him please ? he is embarrassing

Apparently this is about the World Athletics Championship rather than 9/11? The final bit is supposedly referencing Otis Daley.

Is the investigation over?

isn't that his personal view ?

if a footballer espoused a personal view that was profoundly racist (for instance, if they began tweeting about how hitler had it right and we need to bring back nazism), it would be considered a major issue. especially around the 10th anniversary, september 11th is a VERY touchy issue around the us, and with an american owner especially i can understand why the club would react negatively to these posts.

and i have no idea what the conclusion of the investigation was... honestly, the kid's pretty young, probably just got a talking to about not being a dumbass in public.

Today at 6:46 am by BarrileteCosmico