He wasn't in the game much today. Maybe it was all the chopping and changing but he seemed lost at times. When he's not on the ball, he becomes invisible. That can be tolerated when you've got others tracking back, winning tackles, and creating space but he doesn't do that and maybe that's why Jose didn't want him and why Fergie seemed a bit shy of him last season when a transfer to United was being talked about.

Comment on Mata from one of the United fans on their forum yesterday...

José Mourinho correct to offload Juan Mata, says Chelsea legend Frank Leboeuf:
Former Blues defender Frank Lebouef says José Mourinho was right to sell Juan Mata, whom he declares he was 'never a big fan of' and says is too weak to play in the Premier League
http://www.express.co.uk/sport/football/458710/Jose-Mourinho-CORRECT-to-offload-Chelsea-favourite-Juan-Mata-to-Manchester-United

"I've never been a big fan of Juan Mata. I think he's a fantastic player (but) I think he doesn't suit English football."

"I guess Chelsea tried to find the new Zola. But Zola was much more powerful than Mata, and Mata is a little bit light."

"I think Mourinho realised that and that is why he bought Willian, because he has a little bit of Zola, not as big as Zola but strong, skillful and works really hard for the team and can defend."

He wasn't even that frustrated under AVB.

Hope this entire transfer is one massive crash and burn for him. I hope he doesn't qualify for the Champions League or even Europe altogether, doesn't get picked for the World Cup squad, is stuck being managed by David Nobody Moyes for his entire stay there, and wins **** all.

@Shed wrote:Hope this entire transfer is one massive crash and burn for him. I hope he doesn't qualify for the Champions League or even Europe altogether, doesn't get picked for the World Cup squad, is stuck being managed by David Nobody Moyes for his entire stay there, and wins **** all.

Wow, you are the first Chelsea fan I've seen harbouring resentment for Mata. Why the hate?

I don't hate him, I just don't wish him any success whatsoever. Why would I?

I've told you before to cut it with the swearing, Shed. I don't want to warn you again.

I don't understand your 'dislike' for him either Shed. It's one thing to not care when a player moves on but its completely different to wish him the worst.

He won PotY twice and kept trying instead of complaining like many other players when Mourinho came. I don't blame him for wanting to leave. Hate the club if you want to since it is they who decided United would be a good club to sell your hopeful future no. 25 to

He jumped ship to a direct rival at the first opportunity rather than waiting til the summer to move abroad because he thought playing 14 games in the next 5 months would make any difference in his getting a World Cup place or not. (hint hint: you were on the pitch just about every minute of our 11/12 Double-winning season and played exactly 4 minutes out of 540 at the Euros – face it, your NT manager likes you even less than Mourinho did)


Why should I or any of us wish him anything but the worst? Yes, I'm going to hope a direct rival does well for the next 5 years just so I can see some miscellaneous former player enjoy his time there so I can feel some sense of warm, fuzzy football fraternity inside....

Of course it is obvious he's not going to start for Spain but wouldn't you have in his shoes wanted to prove your worth rather than do nothing at all?

Other clubs were reported to be interested in Mata but it is Chelsea that makes the first move and that was to accept the highest bidder which happens to be United. Player negotiations AFAIK takes place after the clubs agree a fee. Chelsea could have accepted a lower fee from elsewhere but we didn't.

And where did I say I wanted United to succeed?

I hope they continue their decline. But I would hope that a player that has given us a lot during his time here perform well and not disappear into mediocrity. Why cannot him playing well and United under performing be independent events? It's not out of a frat love but out of respect the same way I'd hope Lampard, should he move, to continue to be what we know him to be.

@Soul wrote:Of course it is obvious he's not going to start for Spain but wouldn't you have in his shoes wanted to prove your worth rather than do nothing at all?

Prove his worth to whom or what? Everybody already knew his quality and that wasn't going to change from January to May, when he could have successfully sought a move abroad. If you admit he's not going to start for Spain either way, then what's the motive, and justification, for the move anyway?


@Soul wrote:And where did I say I wanted United to succeed?

You refuted my post saying I want him - and thus, the club - to win nothing, not qualify for Europe, and have as poor a manager as possible. As far those kind of tangible successes are concerned, Mata not succeeding = United not succeeding.


@Soul wrote:But I would hope that a player that has given us a lot during his time here perform well and not disappear into mediocrity.

For doing....his job? A job he was paid more to do every week than most people make in a year?


You only surpass the 'just another ex-player' status, for me anyway, by fulfilling one or more of the following:


• have shown above-ordinary loyalty to the club
• have been at the club for a considerable length of time (extension of the former)
• have, by some device or another, made yourself an icon in club history
• have some connection to the club (ex. player who came through the academy)


Mata fulfills none of these. Why should I thus care what happens to him now, especially as anything that is success for him will also, in turn, mean success for his current club, and, consequently, potentially at the expense of success for Chelsea?


@Soul wrote:Why cannot him playing well and United under performing be independent events?

I never wished him poor personal form. As I mentioned, I said I hope 3 things: 1.) he – as in, the club – don't qualify for Europe, 2.) he – again, as in the club – wins nob all, and 3.) has as bad a managerial situation as possible. Desiring anything otherwise whatsoever would be desiring a direct rival to do well, just so we can see some former player doing well. That's insanity.


@Soul wrote:It's not out of a frat love but out of respect the same way I'd hope Lampard, should he move, to continue to be what we know him to be.

If Lampard moved to a direct rival I'd hope he, too, wins nothing, finishes as low in the table as possible, and is managed by a clown. I thought our loyalty was to Chelsea, not to being able to see former players doing well after jumping ship to domestic rivals? Maybe it's just me though.

As for Mata's WC chances, whatever VDB thought of him, if I was him, I wouldn't have stopped trying. Why give up? In the worst case scenario you'd become an even better player despite not being selected.

I guess you define player success to be synonymous with the club's success and that's fine. That said, I think a player can still have a fantastic performance on the pitch despite how crap the entire team is performing and that's where I'm getting at. Of course I wouldn't want United to succeed at the expense of Chelsea, that's stupid.

The fact that they take a wage to play for the club I support doesn't make me any less attached to the individual players that, in my eyes, played a role in making the club more successful and ultimately made me happier. I don't believe in a certain criteria to be considered an important ex-player. That's fine for club awards/hall of fame etc, but not for individual popularity. I guess that's where we are different.

Mata speaks out on Chelsea exit and reveals what Mourinho told him before he joined Man Utd:
Manchester United’s Juan Mata says Chelsea boss Jose Mourinho encouraged him to make the switch to Old Trafford in January
http://www.london24.com/sport/chelsea/mata_speaks_out_on_chelsea_exit_and_reveals_what_mourinho_told_him_before_he_joined_man_utd_1_3340224

“I wasn’t playing, and to be honest, I am happy when I play football.”

“It’s the thing I like to do the most. He wished me good luck and told me to be good, as did everyone at the club.”

“I’m very grateful for my time at Chelsea and for all the trophies I have won.”

I wouldn't necessarily say I was 'right' when I was merely stating a fact all along. He ran away — from a club he supposedly adored so much, to one of their direct rivals; and to top it all off, looks no more likely to be on the plane to Brazil now than he did 3 months ago. Couldn't be more delighted about it. Feck him.

To what, lock up 7th position?

How the mighty have fallen..

Mourinho and Mata didn't speak at Chelsea, Spaniard reveals:
Juan Mata says he and José Mourinho didn't speak at all at Chelsea, and that his relationship with José Mourinho had sunk so low that he had no option but to leave
http://www.dailymail.co.uk/sport/football/article-2800090/jose-mourinho-juan-mata-didn-t-speak-chelsea-manchester-united-man-praise-louis-van-gaal.html

"For better or for worse, we had no relationship, there was no dialogue."

"I was not happy, but always gave the most respected and my colleagues. You never know what will happen in life." 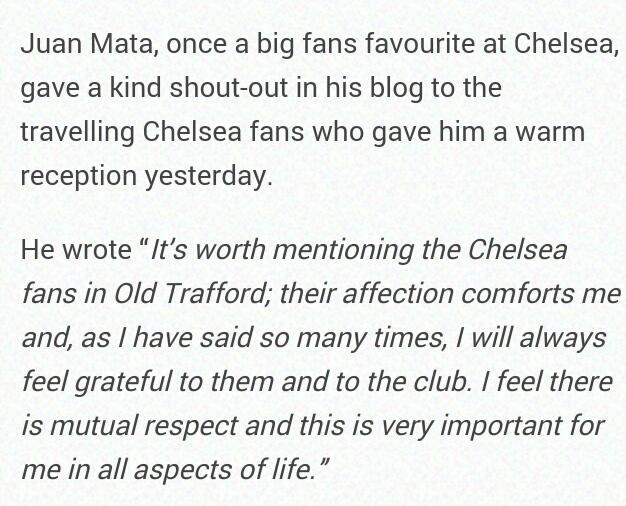