France have one of the most talented teams in world football, having produced players like Ribery, Samir Nasri, Karim Benzema, Sahko, and M'Villa to name a few. The problem is that it's been untapped at the World Cup with such an incompetent coach in Domenech and it all lies on Laurent Blanc to make a great France squad.

In this thread we will discuss formations, news, and upcoming fixtures for les bleus.

Has anyone seen the squad to face Germany today? I can only hope for a draw, as France is severely short on proven attacking options at the moment. Two of the best young strikers are injured (Benzema and Remy). It will be interesting to see if Giroud does lead the line, and how well he performs. A strong performance could see him earn a spot for Euro 2012, and a potential move to a premier league club in the summer (as was highly rumored in January).

Even with Germany hit by injury, I have trouble seeing France running away with this one. I'm predicting a 0-0 draw or a 1-0 victory.

Well, Germany misses:
- Bastian Schweinsteiger (very badly),
- Philipp Lahm (badly),
- Per Mertesacker (not so badly),
- Mario Götze (would have been nice to have him, but not crucial),
- Lukas Podolski (moderately badly if Schürrle steps up) and
- Sven Bender (moderately badly - hope he'll recover fast, second face injury in short time).

I think France should have a good chance, especially as Ribéry is on fire and he really wouldn't like losing against his Bayern team mates who already threatened to make fun of him if he does. ^^

Moreover, Tim Wiese will be Germany's GK and with him Germany has never won so far.

The french think they should be able to beat B side Germany. I almost choked myself when i heard some guy saying that he had no clue who Howedes, Hummels, and Schelmzer were. He pronounced the names with a french accent as to mock them because they sounded to him like nobodies. French people have no clue about the bundesliga, they just watch their league, the EPL and barca, real (im making a gross generalization ofc).

So since Benzema is not playing, i hope you give them an ass whooping of a life time. the butthurt will be epic.

Well, I definitely hope for a good match without injuries. And I'm looking forward to seeing Hugo Lloris in a full match again.

As for the French attack - well, they go against a German defense that is not really proven either as Badstuber so far has rarely played together with Hummels (and it is always a bad thing when the CBs don't understand each other blindly), Schmelzer hasn't really convinced as left back in the NT and Höwedes just comes from a pretty bad match against Bayern last WE.

I think Ribéry alone will be able to wreak some havoc there if he plays as outstanding as last WE against Schalke. (Höwedes already must have nightmares of facing King Franck again this evening XD)

Ribery is usually an horrible player when he is with France. He never looks anything like his Bayern self.

Well, maybe Blanc will manage to make him have fun playing with the French NT - after all, that's what he needs most to play well. ^^

i have no idea who you were talking with Nick but no one thinks France will win.

This is a 2nd string French team which many 1st teamers injured/rested. If germany fails to win then i will be surprised.

Germany doesn't exactly play their A-team either. Moreover, in none of the 5 matches Wiese was in the German goal so far we got a win... -_-'

im telling anyone who's listening, the euros are between spain netherland germany and FRANCE. yes, les bleus are that good , well at least have that potential

And yeah, I was pretty impressed by the French side that won in the friendly against Germany. I wonder how much truth is in the rumours that Bayern is interested in Giroud, btw.

giroud name is being mentioned everywhere, in france they say psg, l'om and ol are interested. me i am not THAT impressed yea he's a decent player but i don't think for example he would fit at psg that well, we need someone more like a benzema more mobile. i don't watch bayern much, he could be a good fit if they cross a lot but then again he's not going to take gomez spot so he probably would rather start somewhere else

I want this team in the Euros

RealGunner wrote:I want this team in the Euros 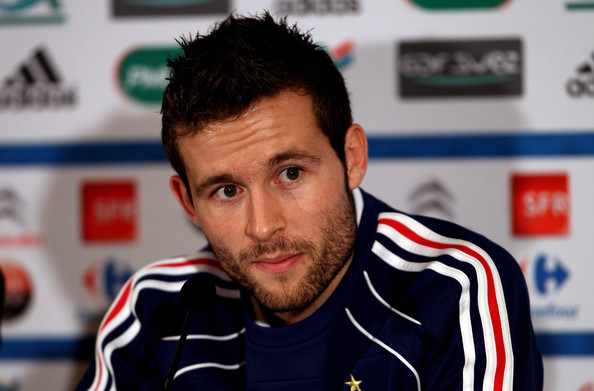 cabaye is too good for the euros brah, want a fair competetion

Evra's experience is better than Cissokho's strength and Clichy's speed.

I am not confident in Evra at all tho after what i have seen the last couple of seasons......

I would put Cissokho, Clichy and Mathieu all above him...... heck id even consider playing Sakho at LB and playing Koscielny or Mbiwa alongside Rami.

Lloris
Debuchy Rami Koscielny Sakho
Cabaye M'Vila
Ben Arfa Benzema Ribery
Giroud
Chose Sakho because he's the player the most reminds me of Abidal and the rest are meh and Debuchy because while Sagna is better defensively it doesnt make sense to me have two defensive fullbacks and Debuchy provides a great outlet going forward.

Rest of the team picks itself to me the only other question mark is Remy or Giroud and i personally prefer Giroud.

Mole, Sakho is shat this year mate, the captain armband is saving him otherwise he would visit the bench more. Sagna-Mathieu/Clichy is a better combination.

Mr Nick09 wrote:Mole, Sakho is shat this year mate, the captain armband is saving him otherwise he would visit the bench more. Sagna-Mathieu/Clichy is a better combination.

Shat at CB yes but would he be shat at LB

He is shaken up mentally because of the level of expectation that PSG is under, i doubt at his young age and with the limited experience he has he can make that kind of transition. I cant even remember last time he played LB lol

Fair nuf Nick, i think id rather any LB in existence to Evra tho

Such a shame about Abidal

I always wonder if people know and rate Gonalons on this forum?

Yh i rate Gonalons but i cant see the Cabaye-M'Vila partnership being broken up its showing some nice potential the only way i see Gonalons getting in is if Benzema is playing as a "fake 9" and Giroud drops to the bench.

Cabaye is no AM.

Le Samourai wrote:Cabaye is no AM.