Kulusevski has no agility. He can only run in a straight line.

Kulusevski plays like he is always standing on a balance board. It's hilarious to watch. I like him though, his awkward style somehow works and he does have tons of talent. Definitely needs space to play, injuries forced him to play in the front 2 for the middle of the season and that didn't work at all. Coming in from the right wing he is a threat.

rincon wrote:Kulusevski plays like he is always standing on a balance board. It's hilarious to watch. I like him though, his awkward style somehow works and he does have tons of talent. Definitely needs space to play, injuries forced him to play in the front 2 for the middle of the season and that didn't work at all. Coming in from the right wing he is a threat.

His only real talent is his vision, so once in a while you'll see a great pass from him, but that's only by chance. Technically, he's a scrub, only Chiellini and Demiral have worse feet than him. A rare miss from Paratici when it comes to talent


Highlight of yesterday's game. He really should change profession asap.

And Napoli bottled it against Cagliari ( Cagliari tied on '94), otherwise....
Incredible fight 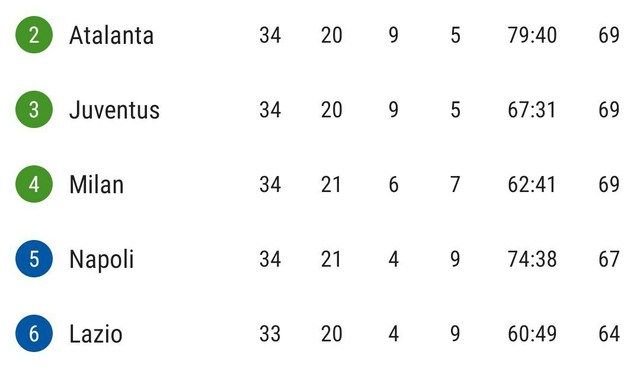 Yeah, there are some mouthwatering H2H games among the CL contenders too.

Serie A is essential viewing next season. WATTBA.

Pledging my support to Inter. Will watch all games next season.

There's a big clash in the Milan dressing room apparently, Hakan, Bennacer and Leao did not take kindly to Ibra chastising them in the 2-0 win against Benevento. He reportedly told Hakan when he took a shot 'I dont understand you, i dont fucking understand you' and to Bennacer when he shot instead of passing 'Pass it to me for fucks sake pass it to me, fuck'

In addition, some of the players did not take kindly to Maldini saying to the press that all contract extensions are frozen until the end of the season to let players focus on the sporting objective, desipite renewing Ibra for 1 more year last week.

I surmise that Bennacer and Leao will be sold, whilst Hakan won't be renewed, Donnarumma will depend on if there is a GK merry-go-round this summer

My opinion: fuck Hakan and fuck that mince mentality of these players, Ibra was right to chastise them, i only hope we get a respectable sum from Leao and Bennacer. Don't want any pansies in my team.

Hakan has been good this season but like Donna I couldn't give a fuck about them. Both push for more than they deserve mid-season and are not as good as they value themselves.

Bennacer simply isn't used to superstar mentalities like Zlatan so hope he grows a thick skin. Leao will never amount to a thing so he too can? F*ck off. Pea-brain player.

if hakan cant even take on ibra's rant i dont know how he is going to take it elsewhere in other clubs. some people feed on ibra's rant as advice to do better while others take it differently.

leao is another player who has been given ample opportunities, and still complaining about not being allowed to play his favourite LW position and now he has been playing LW and he has been royally messing up with that too. sigh. cost 32 million .. jeez...

i have soft spot for bennacer but he too has some fitness and lack of concentration issues of late. plus he was way too distracted about the idea of joining PSG or mancity last summer.

these guys has been treated like royalty for too long and doesn't give any thoughts about how serious position we are in. pioli gone too soft on them really.

also i think u guys are aware about the milan ultra demanding donnarruma to sign extension or sit out against juventus but tbh donnaruma can leave too.  club went raising his current 6.5 million salary to 8 million and still that isnt good enough for riola. he has demanded 12 million for 2 years only and threatening further to add release clause of 32 million should milan not qualify for CL. donnarrumma meanwhile comes to his friends and public saying he wants to stay in milan. he is not kid anymore and the fact that he wants riola to make his life decision makes this matter ugly as it is already, so he can leave as far as iam concerned. frankly at this point everyone is fed up with donnarumma using fans and his love for club as a hostage to demand what he wants. he has to make mind here, either u stay or go no one is going to force u to stay. thats what ultra is asking

i want to say this that it is because of this donnarumma fiasco and money demands that has unquestionably made hakan ask for more. why wouldnt he . why should a player a lot younger than him already as highest paid, further demands upto 12 million while he has to settle for 4 million.

and this will only entice players like theo bennacer and btw kessie contract is running out soon, he is not going to settle for anything less. romagnoli using riola is asking for 7 million raise form his 3.5 million. absolutely maddening.


again i dont want to be two faced here, but im not quite confident that maldini, massara and gazidis has got this club under control or has this stable long term goals on which direction they want to have the club headed towards

our players are way too uninterested and distracted about other things than doing well. so juve are very much in a position to win this. i hate to say this but we have been atrocious since winter. 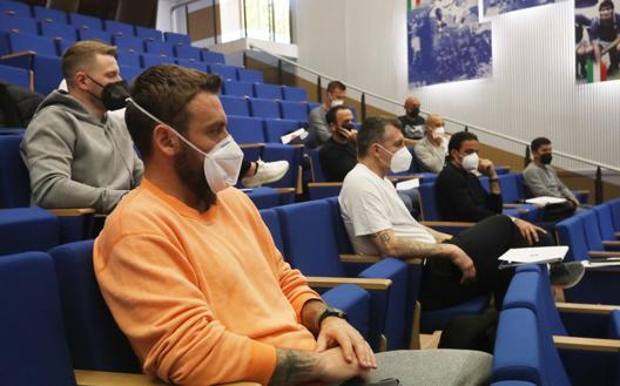 riola came this week saying juventus has offered like 10 million plus bonuses, and another 3 million to his father as a sign on fee and that it is upto milan. milan while has no intention of going any further than 8 million.

as far as i am concerned dolllarummma is juventus player next season. he is close to burning the bridge ... just like de sciglio

is it that de rossi is set to join mourinho's staff soon? thats what i read. i think matri is atm part of lazio's staff? i saw him with lotitto against milan game.
it is strange to say but i dont see vieri as a coach materials. montolivo pazzini either lol

Empoli back in Serie A, Nice
They have had interesting teams/coaches/players in recent years
Well run club

rincon wrote:This is the right kind of meltdown that we need before Sunday's match

Shades of halftime at Cardiff

Milan are still heavy favourites though

Let's hire another legend with no experience and bury his management career too. Makes sense.

But i get what you mean, we want to avoid the path taken by Milan in 2010s

Really DDR? He is the player in Italy that most have always expected to coach since a long time. His dad is a coach of Roma's youth setup for most of his career as well. By the time he retired he was already half coaching his teams. 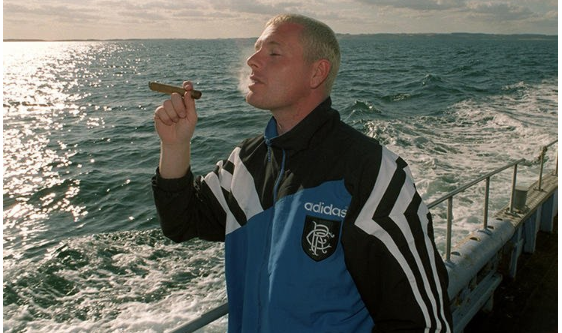 this Is the current Serie B table when just 2 matchdays will have be played. 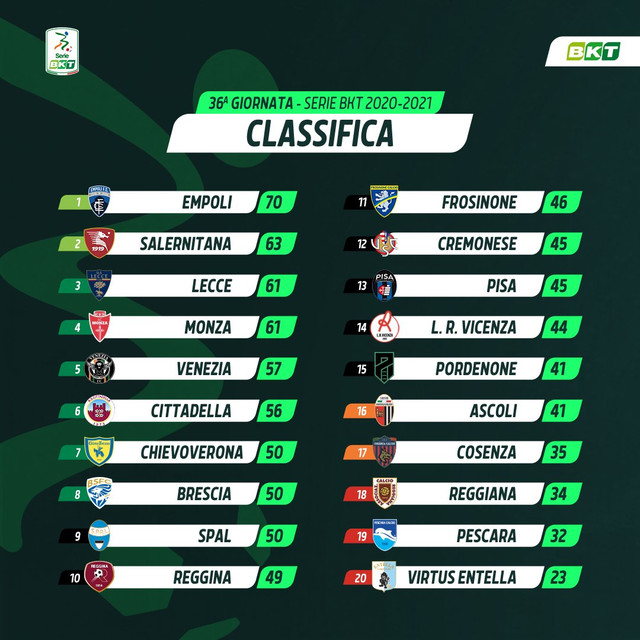 First two teams get promoted, play off for 3th - 8th ( well, it is complicated to explain it )

Salernitana are living their dream, it is the team from Salerno, beautiful city situated in same region as Naples, the Campania

Their president Is Claudio Lotito . Yes, the Lazio president.

This Is problematic on paper , because the double ownership is forbidden in Italy ... Rumours about Della Valle buys Salernitana if promotion happens.

Monza (city in Lombardia, never a Serie A league in their story ) is the club that seems the old Milan .

Yes, Berlusconi is the current president , Galliani the sporting director (he is from Monza, so he convinced Berlusconi to buy Monza for making true the dream of every Monzese) , Brocchi is their coach, and Balotelli and Boateng their attacking players

Atm they are flopping. They were definitely favorite on paper at the beginning of season .. but It happens when you insist on a donkey as Brocchi

We'll see who gets promoted . A mention for Lecce top.  They have a very good team for Serie B, built very good and their coach is Corini who got an unexpected promotion under Brescia last year

Venezia play a good football , but they 've bottled some points . They might be a surprise during play off

Congratulations to Robespierre and Vibe (and any other GL Inter fan I missed) for Inter winning this year's Serie A title. IT was a well-deserved victory even though Milan made a phantom pregnancy of a push for the title (we will be lucky to get a CL spot at all now).

I think it is great for the league that Juve's domination is cut short, and I hope next season has a different champion as well.

How much is beautiful Inter under Antonio Conte

So proud of my team