Josep Maria Bartomeu, FC Barcelona president, in an interview with Barça TV+, spoke about the future Barça coach: "If nothing takes a wrong turn, Koeman will be Barça coach for next season. We know him and how he thinks and also his experience. He knows the Barça philosophy well and believes in the Barça style and for that reason he is one chosen."

As well, Bartomeu remembered that "in December Koeman told us he had a responsibility to the Dutch national team just a few months before Euro 2020." He added "now with Covid, the situation has changed and it has been a dream for him for many years."

With regards to possible signings, the Barça president explained that "we have spoken about signings with Koeman but the arrival of new players depends on others leaving."

More highlights from the interview on individuals in particular:
Leo Messi

"Messi has said many times that he wants to finish career at Barça. Koeman has said to us that Messi in the pillar of his project."

"He has a contract until 2021. I talk to the player and his father regularly. I have no doubt, despite the disappointment of Lisbon, that we will be excited by the new project. Messi is still the best player in the world and we have him with us."

"I have not spoken to Messi but I have spoke to his father. The pain is behind us. We have to be optimistic and we have to pick ourselves up, work hard and excite everyone. A cycle is coming to an end and another one starts but in the Messi era."
Éric Abidal

"Today he told us he wanted to leave his job. It's a personal decision. He has been a great contributor. It is his decision and we have to accept that."
Quique Setién

"We have to thank Setién for his efforts, coming in half way through the season, it's not easy at a club like Barça. Lockdown did not help. Coming back after the pandemic, it was difficult to pick up the pace the team had before."
Ramon Planes

"Ramon Planes will be in charge of the technical side. The decisions that are to be taken in conjunction with the technical secretary and the new coach. There will be an individual conversation with each player that is not part of the plans. They are legendary players and they need to leave with honours, but we have to talk case by case."
Ter Stegen

"Ter Stegen. He is a great professional. His contract extension is on hold because he requested it that way during the pandemic. He will remain at Barça and we believe in him a lot."

"We have received offers for Ansu Fati but we don't want to sell him. We want to grow here. He is not for sale."

"Trincao abd Pedri, for Barça fans, are a little unknown. They are players are exciting. Since we have signed them we have had offers for them for double what we paid."

Eh, Valverde worked a lot of magic (in spite of his boring af style) with the same has-been squad. If it weren't for his complacency he could have gone farther, but he went into 2nd legs thinking they were already over and the rest is history.

Koeman will be tasked with rejuvenating the squad, we will see whether he will succeed with that at least.

At least he has PL experience

Saw a headline that Koeman wants Wijnaldum at Barca. Love what the lad's done at Liverpool, but come on.

Once the Barca fans realize what kind of football Koeman's teams play, the knives will be out immediately, rejuvenating or not

The knives are already out mate, but people don't care since he will be gone next summer anyways

Barca board smoking some good shit !

He's already cleaning house, told Rakitic, Umtiti, Vidal and Suarez not to come to training and is already negotiating ending their contracts. Suarez was going to earn 24m over the next year and he's unlikely to earn that anywhere else, so we'll see how much of that Barca is 'forced' to pay to get rid of him now.

I would add Busquets to that list, he's been a liability for at least 3 years straight now

It's a shame Umtiti will leave. He was great and very promising pre-injury

Umtiti not getting a surgery done when he was told too he hurt himself with that one.

Reports coming in that Pique will remain where he is and Busquets will be downgraded to bench.

Honestly nothing to complain about regarding the moves themselves, only the way the club is going about it.

Koeman changed all 11 players at half-time but stuck with a 4-2-3-1 set-up, a system he appears likely to keep for the start of the LaLiga season.

Explaining that decision, the former Netherlands boss told Barca TV: "The midfield system is a little different to previous seasons but the team has the quality to do that and do it well.

"We're looking to move the ball much quicker high up the pitch to break the lines [of the opposition], to create space and generate more dangerous [situations] so the team scores goals.

Double pivot and long balls. Thank God we got a Dutchman to play Cruyff football

I'm down for whatever works tho, at this stage, just no illusions about the team being entertaining again.

Havent watched the game, but if it is 4-2-3-1 that he will play, its gonna be very different from what we are used to. Its gonna be even more unbalanced for us, and we are gonna concede even more goals, unless we have our FBs and 2 pivots stay back or something...

I guess we all know this season is a throw-away.

It will be interesting to watch this season, how Koeman does the job !

Apparently he has told Puig to find a new club

He is not in the squad for today.
We get the Koeman revolution we were promised. Let go of one of our most promising youngters. Meanwhile, that piece of trash and the biggest con job of the century Busquets still starts.
Puig was one of the only bright sparks in our run in last season. Should have been rewarded with a bigger role this season. Instead, he gets the axe.
I still have doubts about Puig's physicality but the kid has balls. He takes tackles like a champ, gets up immediately and starts playing again.
Huge concerns around whether he can play pivot in a 4-2-3-1 with Messi but lets look at the alternatives.
Busquets- The piece of trash who has been involved in every single one of our humiliations starting from the 3-0 against Juventus to the 8-2 against Bayern.
8 freaking 2 and that piece of garbage still starts and Puig gets the axe. 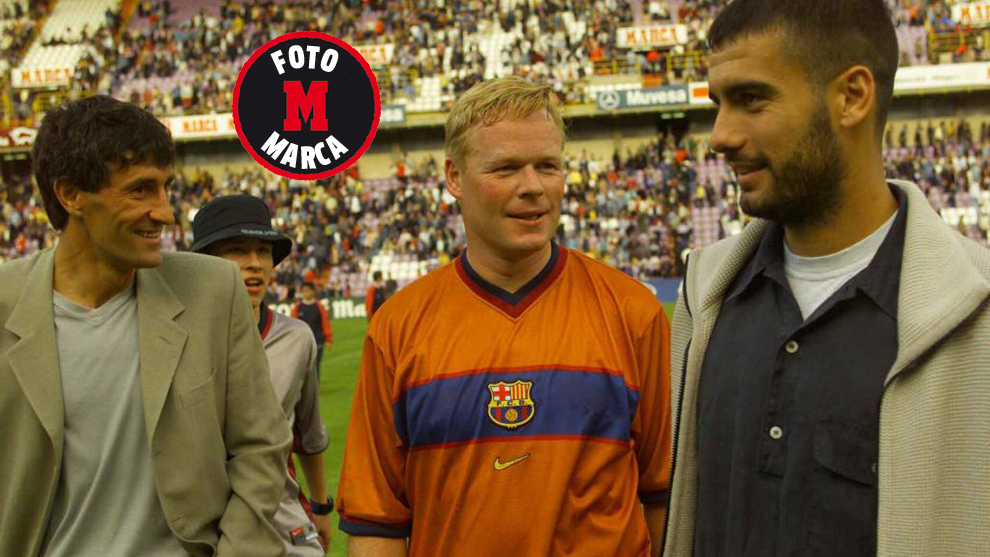 I never saw that much from Puig despite everyones opinion. Perhaps as a rotation option, but at best he would reach Roberto level at best imho. So it might not be a terrible thing and waste everyones time. MAybe the management is thinking of selling him for some much neede cash?

But given our shortage in midfield atm, unless Koeman has a signing lined up, it is another strange decisions for the timing.

No more signing, Marca reports we wont be allowed by la liga to do new signings unless we sell first. And I don see us offloading anyone. Another disastraous season incoming.

First sign of hope early on, Lenglet gets red card toward the end of 1st half, Koeman subs off Griezmann for a CB instead of young Ansu

You just know Setien/Valverde would have subbed out "inexperienced" young beautiful Ansu.

The second sign is he is stubborn enough to play bygone la masia products in three consecutive games....

Not a fan of him long term. But like the fact that he is giving the youngsters prominent roles. Takes guts to start 2 17 year olds in Pedri and Ansu and Dest in a Clasico no less. And they are repaying the trust. If he can develop the more promising youngsters in our squad, will be a job well done.