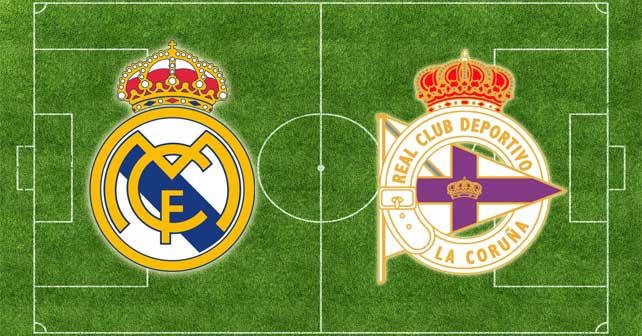 2. Benzema: skipped training today and is thought to have picked up another injury, though there's nothing official yet. Source: Marca. You might also want to know that Z, during his pre-game press conference, said that Benzema has been left out to rest, and he didn't mention anything about an injury.

What has been confirmed:

What has not been confirmed but hinted at vaguely:

I think I read somewhere that in addition to Morata, Kroos will start.

Deportivo is not very good this year. Expect a number of rotations as Zidane is looking at lineup for world club championship, likely pkaying the Mexican team in SF and Columbian team in final.

Yes, I think Kroos will start tomorrow as well.

I didn't mention it because I usually make sure not to include my personal opinion in my original post. I just mention the latest news and all the information I can glean from Z's pre-game press conference so you guys can have everything you need without having to go to the trouble of getting them yourselves.
_________________
I ****ing hate Komodo dragons

Your lineup is good enough to get the job done, I think.

I like the fact that you rested Carvajal, Varane and Ramos. I would do the same thing, especially Carvajal. We wouldn't want to lose him now. 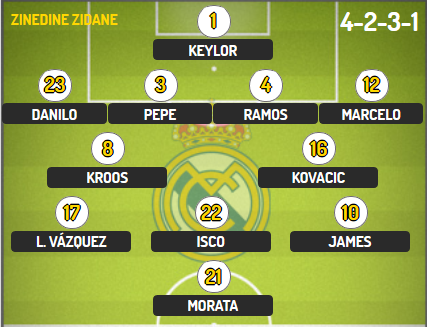 I have a feeling this match will either be a banana peel or we smash them by 5 or more goals.

Good game just lack the goals. Decision making in the final third needs to improve. Is James crippled on his right leg or something. So frustrating to watch one footed players
_________________

Dropping points against them at home was unthinkable to me.

Thanks Ramos, you really are a legend.

We make our games so much more interesting than they should be. What was Casemiro doing back there trying to dance around a Depor player. It's like some of these guys get a temporary blackout and do something stupid when there's no need to. Also I think it's safe to say our best and most effective tactic is the crossing. We create alot of chances that way. Finally the subs were appropriate and made total sense and difference when they came in. You might look at the score see 3-2 and think this was a close game, in reality it was the most one sided game we have played this season. We just shot ourselves in the foot

Danilo's first touches could reach my house, no kidding. Asensio, James and Isco didn't make the most of their chances. You can tell why they don't start. Mariano and Morata forward line ffs

give me more of that

Edit: Lucas and Nacho pushing them around ffs. Was so proud of that. Proper Madridistas, I was pissed at the time because we got into their timewasting trap but in hindsight now.. well done boys

Case really let us down with that stupid and unnecessary mistake.

Z's subs this time around were spot on.

Oh it was nice seeing Ramos playing as a CF for a change.

oh god! I really got nervous and stressed out for this one.

i think zidane has had a reputation of making reasonable subs for quite a bit now. his record of bringing guys in, and having them deliver has been quite good, starting from that roma game when jese came on.

ramos lol, i can't bash ramos anymore, (even though i didn't like how far our defense pushed up) say what you want, that guy has character. what scares me now is, teams will start making defensive adjustments for him when we get in those type of situations, i hope we don't ride our luck.....but what a character. "ramos time" becoming more of a positive than a negative

it didn't look like a 3-5-2, imo it was just bunch of guys pushing up way too much. we always played the game with 2 CBs, and then at some point we tried throwing everything at them, and defenders forgot that someone needs to be at the back. we can't make those mistakes in the ucl especially at home with the away goal rule

i wish we could boycott the world club cup, i seriously do. with all the injuries we've had, to travel all the way to japan and play in an 'over-glorified' mid season tournament is something i have never been able to understand. thank goodness florentino didn't pull another foolish stunt by having us play a mid season friendly like we did against psg two years ago. these "super" cups really do get on my nerves.

When Marcelo came on he signalled our defence to switched to a 3 man back line. Though Ramos went into the penalty box from time to time. Lucas and Marcelo as wingbacks, Casemiro and Kroos in the middle and Morata + Mariano up top. It paid dividence in the end because putting in crosses for Morata, Mariano and Ramos......I mean you can't hold them out for long lol
_________________

You can't play like that until the other team is completely exhausted hala... Otherwise, even a segunda b team would score on you on counters. Pretty much a last 10-15 min tactic unless you're down 2+ goals. In a 1 goal game where a draw still get you points, a manager shouldn't be completely reckless.
_________________

Today at 4:10 pm by BarrileteCosmico